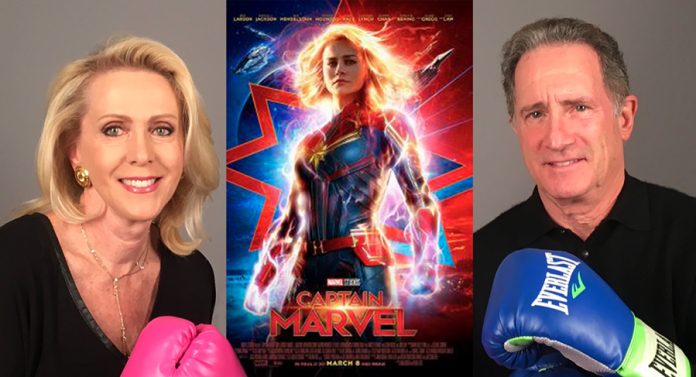 MOVIE TIME! Jeanne and David Kaplan of Kaplan vs Kaplan, are back with his and her movie reviews of Captain Marvel, starring Brie Larson, Jude Law and Samuel L. Jackson.

Jeanne: All I can say is pish tosh to all those naysayers who have the unmitigated gall to troll Brie Larson and the powers-that-be at Marvel Comics Universe for casting her as the first female superhero in CAPTAIN MARVEL. She is fantastic — and whomever made the decision to cast her should be lauded not denigrated.

I shan’t go into great detail regarding the plot. If you are a fan, you already know a lot — and it can be tedious to try to explain it all here. It’s simply better to just see the film and experience it for yourself. But I will supply a brief synopsis.

The year is 1995 and Vers (Larson) is a member of the Kree Starforce on the planet Hala. Her commander, Colonel Yon-Rogg (Jude Law), is schooling Vers on the proper usage of her special ability of firing bursts of power from her hands. During a mission, Vers is captured by the Skrulls, a race of shapeshifters led by General Talos (Ben Mendelsohn). Escaping them, she ultimately crashes into a Blockbuster Video store in Los Angeles and eventually teams up with Nick Fury (Samuel L. Jackson), just a S.H.I.E.L.D. agent at the time — as this is prior to him becoming S.H.I.E.L.D.’s Director.

Vers and Fury learn that she was a U.S. Air Force fighter pilot named Carol Danvers in 1989, along with Dr. Wendy Lawson (Annette Bening), when they crashed while they were testing Lawson’s light-speed engine. As Carol pieces together more of her background, she realizes that the Kree Starforce was controlling her by limiting her powers. After accessing her full force, she becomes the virtually unstoppable Captain Marvel.

Directed by Anna Boden and Ryan Fleck, who also wrote the screenplay with Geneva Robertson-Dworet, CAPTAIN MARVEL also boasts a story by Nicole Perlman and Meg LeFauve, so there is a whole lot of female input — finally. Which is only fitting since we have our first woman suiting up for the role.

Larson is really terrific. She’s confident, smart and never comes across as too full of herself. But what I love most is her relationship and camaraderie with Jackson. They have great chemistry — a couple you’d like to have along on a road trip.

And I am crazy about Law — good guy/bad guy — who cares? Those blue eyes are mesmerizing and he’s part of my favorite scene in which Captain Marvel and Yon-Rogg face off. It’s hilarious — reminiscent of Indiana Jones taking out his pistol and shooting the swordsman in RAIDERS OF THE LOST ARK.

As you would expect, the set designs and special effects are phenomenal — loved the Blockbuster Video store — so many memories from one of those. And Carol’s best friend’s, Maria

(Lashana Lynch), and her daughter, Monica’s (Akira Akbar), lovely home in Louisiana is especially appealing. And in another first, Pinar Toprak composed the score for CAPTAIN MARVEL, making her the first female to score an MCU movie — and it is amazing!

In case you’ve never seen a superhero film from MCU, you must stay throughout the entire credits. As always, there is a surprise at the end — don’t miss it!

David: Brie Larson already has an Academy Award for her dramatic role as the mother of a young boy, kidnap victims for many years, residing in a tiny room. The film was ROOM, so the question is would it be a risk to her career if CAPTAIN MARVEL fell flat? And more importantly, could Larson play a superhero?

Well, you will believe that Brie Larson is, indeed, a superhero, and CAPTAIN MARVEL is superb entertainment. So doubters who haven’t yet seen the movie should actually see it.

As Carol Danvers, aka Vers/Captain Marvel, Larson does not take herself too seriously. Her character is instantly likeable and down-to-earth. And she has remarkable chemistry with Samuel L. Jackson, who plays S.H.I.E.L.D. agent, Nick Fury — but don’t call him anything but Fury. Jackson doesn’t overact here, as he is wont to do and he provides most of the comic relief, as is his usual style.

My favorite aspect of CAPTAIN MARVEL is the fact that the future — represented by Vers and the aliens — melds with the not-too-distant past on Earth, represented by Fury and others. One notable result of this union has aliens scratching their scaly heads over how slow computers were in 1995 while uploading information. It’s just one of many amusing moments that complement the action.

Our screening was in 3-D which proved to be an enhancement to the movie’s unusual visual effects, not just a ploy to charge a few extra bucks. And for the record, I stayed awake through the entire two hours and four minutes, including the two surprise epilogues at the closing credits, which includes some of the excellent music by Pinar Toprak, the first female to compose a score for Marvel Comics Universe.

Captain Marvel obtains her initial super powers via an accident, i.e., incredibly devastating hands that, in addition to hurling destructive forces of fire and power, can also instantly heat a pot of tea. Incidentally, there’s a cat named Goose, actually portrayed by four different felines. But I can’t reveal anything about this special four-legged creature, so you’ll have to see for yourself.

CAPTAIN MARVEL is never dull. The writing is better than I anticipated from a superhero film. And as expected, there is a cameo by Stan Lee, the late Marvel co-creator, in addition to a special, albeit brief, tribute.