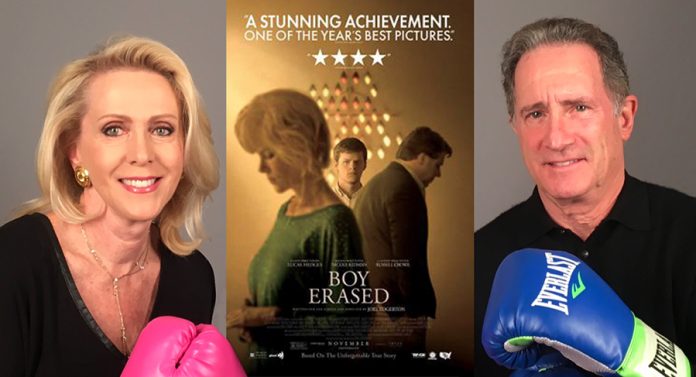 Jeanne: Lucas Hedges is captivating as Jared Eamons, the son of a small town pastor in Arkansas, who is outed at the age of 19 and coerced into attending a gay conversion therapy program. Based on the 2016 memoir of the same name by Garrard Conley, BOY ERASED does not sugar-coat the trauma of this controversial attempt at changing people from gay to straight.

Once in college, things change for Jared. He meets Henry (Joe Alwyn) and they click immediately — doing everything together including running and even going to church. But a night spent playing video games in Jared’s dorm room ends with a vile act. And when Henry calls Jared’s parents to expose him, Jared realizes that he has known the truth about himself all along.

Marshall, along with a couple of his fellow pastors, decides the only way to “save” Jared is to send him to conversion therapy. Nancy goes along with their son to the facility where Jared spends his days locked in a room with Victor Sykes (Joel Edgerton), the head therapist, and other “afflicted” participants. At night he and his mom share a hotel room until Sykes decides what is next for Jared. After a particularly violent session with Sykes and a fellow student, Cameron (Britton Sear), Jared has decided he’s had enough.

Edgerton adapted the screenplay for BOY ERASED and he also directs. He has assembled the perfect cast for this hard-hitting drama. While he, himself, is perfect as the smarmy, self-righteous Sykes, it’s the three major roles, starring Kidman, Crowe and most importantly Hedges, which render this story so heartbreakingly real.

There is no denying Kidman is in a class of her own. She is quietly amazing as the fiercely protective mother of a gay son, who is also married to a Baptist pastor. When she tells her son that she will “take care” of his father, you have no doubt that she is telling the truth.

I have always admired Crowe — I think he’s a marvelous actor. He has taken some hits during his career, but as Marshall Eamons, he is superb. It’s not a huge role, but for obvious reasons, it’s a very important one. A false note on his part would impact the seriousness of this subject, but Crowe delivers a stellar performance, especially in the last scene he has with Hedges.

But the majority of the weight of BOY ERASED falls to Hedges — and rightly so. Jared has been wronged in so many ways and Hedges never once lets us forget that. His portrayal is strong and steadfast, yet tender and poignant — simply brilliant.

BOY ERASED is not an easy film to watch — nor should it be. This ridiculous process of trying to convert people to something they are not is preposterous. At the end of the film, we learn that approximately 700,000 people have been subjected to this heinous “therapy”. The young man next to me was sobbing through the credits — heart wrenching doesn’t begin to describe it.

David: Lucas Hedges, the 22-year-old actor from MANCHESTER BY THE SEA (2016), for which he earned an Oscar nomination, proves that honor was no fluke with his powerful and sensitive portrayal in BOY ERASED. Hedges plays Jared Eamons, the teenaged son of Marshall (Russell Crowe) and Nancy (Nicole Kidman).

Based on the real-life memoir by Garrard Conley, the film focuses on a  gay conversion therapy center run by Victor Sykes (Joel Edgerton, who also writes and directs) which Jared is forced to attend by his parents. Initially it’s only a 12-day program with attendees leaving every day at 5 p.m.But there is a longer-term option with living arrangements on the campus for those who need further attention.

BOY ERASED is an emotional, honest look at how certain conservative elements of American society consider homosexuality as a choice that can be eradicated with proper treatment. The story takes place in Arkansas, and except for the presence of cell phones, it could be anytime, past or present.

In addition to Hedges’ extraordinary performance — he naturally gets top billing over his more established co-stars — Kidman and Crowe are equally effective in what are essentially supporting roles. Each of them has one particularly memorable scene playing opposite Hedges. Years from now cinephiles will be talking about the duo’s indelible moments from this movie.

Edgerton knows how to capture an audience’s attention, as he did in his other feature-length directorial effort, THE GIFT (2015). Of the many stunning sequences in BOY ERASED, none may be more appalling than the sight of one young man being assaulted with a Bible to exorcise the demons from his body.

BOY ERASED should be seen and embraced by every member of the LGBTQ community. It is exceptionally well acted — a compelling examination of how parents react differently to their son’s coming out.

Hedges is gripping as he allows his character’s raw emotions boil to the surface in an explosive finale. The closing credits reveal some astounding facts about conversion therapy in this country. We also see photos of the real-life family, along with an amazing revelation about the real Victor Sykes.