Kaplan vs Kaplan Movie Reviews – BLINDED BY THE LIGHT 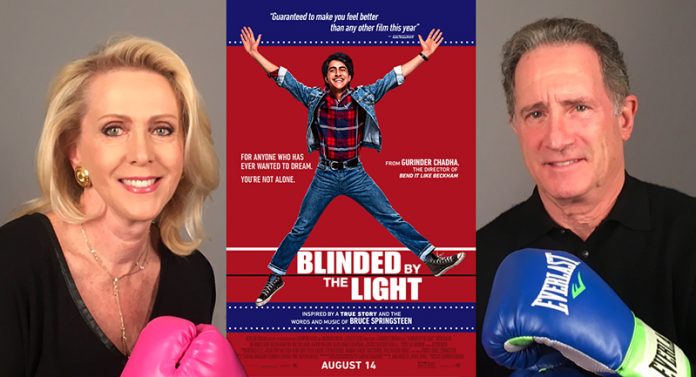 Jeanne: Driven by a stellar performance from newcomer Viveik Kalra, BLINDED BY THE LIGHT is an ode to the magical, mystical powers of the lyrics and music of Bruce Springsteen. Based on Sarfraz Manzoor’s acclaimed memoir “Greetings from Bury Park: Race, Religion and Rock N’ Roll”, which chronicles Manzoor’s own coming-of-age and his connection to Springsteen’s music, BLINDED BY THE LIGHT may not be the best movie of the summer, but it is surely to be a crowd-pleaser, especially for diehard Springsteen fans.

Kalra plays Javed, a Pakistani Muslim teenager who is obsessed with writing. He’s a poet — and a good one. It is 1987 and Javed lives in Luton, England, a dead-end town north of London. His father, Malik (Kulvinder Ghir), is a factory worker who moved to England dreaming of a better life for his family. Javed’s overworked mother, Noor (Meera Ganatra), takes in sewing. His best friend since they were young boys is Matt (Dean-Charles Chapman). He plays in a band and Javed provides the lyrics for their unpopular songs.

On his first day back to school, Javed meets two people who will greatly influence his life. First is Roop (Aaron Phagura), an Indian student who introduces Javed to Bruce Springsteen — his meaningful words and music. The second is his English teacher, Miss Clay (Hayley Atwell). She is the catalyst behind the beginning of Javed’s success as a writer — promoting him and his work at every turn.

Bruce Springsteen read and admired Manzoor’s novel. And who wouldn’t appreciate someone who has attended over 150 of your concerts? Although for Bruce, I don’t think that’s such an anomaly. He gave his blessing to director Gurinder Chadha to use his songs in her film, which she co-wrote with Manzoor and Paul Mayeda Berges.

Much like YESTERDAY did for The Beatles a little earlier this summer, BLINDED BY THE LIGHT brings back all the joy and wonderment of Springsteen’s unique and spiritual voice. His words of life, love, work, pain and forgiveness are the focus of BLINDED BY THE LIGHT as Javed transports himself from a fearful boy to a man who knows what he wants and goes after it.

BLINDED BY THE LIGHT’s success all falls to Kalra — and he doesn’t disappoint. He’s enigmatic, effervescent and life-affirming. The entire cast is really very good, especially Nell Williams who plays Javed’s first girlfriend, Eliza. The scene at Eliza’s house with Javed and her parents having dinner is alone well worth the price of a ticket.

There are some truly special moments in this movie. One which stands out is Matt’s father (Rob Brydon — who is a huge favorite of mine) and Javed having some fun with Springsteen’s music at Matt’s expense. Brydon is an absolute hoot and it’s a great crowd-pleasing scene.

David: Bruce Springsteen has been a global musical icon for over 40 years. He appeared on the covers of Time and Newsweek in 1975, and a Broadway play about his life wrapped up December 2018. Now his words and music are the primary focus of a new film called BLINDED BY THE LIGHT, and it’s not a documentary. It is a comedy/drama about a teenaged British Pakistani boy who is supremely inspired by The Boss, changing his life forever.

Superbly directed and co-written by Gurinder Chadha (BEND IT LIKE BECKHAM, 2002), the movie features excellent performances from the entire ensemble, but it is newcomer Viveik Kalra as Javed who finds salvation from his dreary life in Luton, England. His is a jaw-dropping debut on the big screen.

While BLINDED BY THE LIGHT features some of the familiar cultural conflicts seen in other movies — i.e., the young son wants to spread his wings despite the strong objections of his strict father — the fact that it is based on a true story gives it added credence.

Co-writer Sarfraz Manzoor, whose book this film is based on, has been a Springsteen fan for many years, not to mention an attendee at over 150 live converts by Springsteen and The E Street Band. When Javed’s high school classmate, Roops (Aaron Phagura), shares a couple of Springsteen cassettes with him, Javed is immediately smitten as he listens to the lyrics on his Walkman (the year is 1987, so you may need to Google “Walkman”).

One of the delights in this film is the presentation of Bruce’s lyrics in a unique animated style, wrapping around Javed’s body as he listens to the tapes. Another highlight is the performance of Nell Williams as Javed’s classmate and romantic interest, Eliza, who comes into his life at just the right time. Williams is quite adorable and perfect as the precocious girlfriend.

I especially liked Rob Brydon playing the father of Javed’s best friend, Matt (Dean-Charles Chapman). He unexpectedly sings and dances around with Javed to Bruce’s music, much to the consternation of his own son. Other cast standouts include Hayley Atwell as Javed’s schoolteacher Miss Clay. She encourages him to find his voice in his poetry and writings. Kulvinder Ghir stars as Javed’s stern father who eventually comes around to appreciate his son’s ambitions and talent.

BLINDED BY THE LIGHT contains some very entertaining scenes, including the “day party” he attends with his sister. It’s the only time these young Pakistanis can get out of the house to literally let down their hair. Later Javed addresses his classmates at his school commencement where he ditches his prepared remarks in favor of his heartfelt thoughts about Springsteen, and the profound effect The Boss has had on his life. It’s an emotional moment, especially when his father, mother and sister enter the small auditorium.

The film also touches briefly on the white supremacy uprisings prevalent in England at the time, so BLINDED BY THE LIGHT is certainly topical in view of our own problems in the U.S. This movie is a must see for Springsteen fans. It should give a fresh perspective and appreciation of what Bruce Springsteen has brought to the world of music.