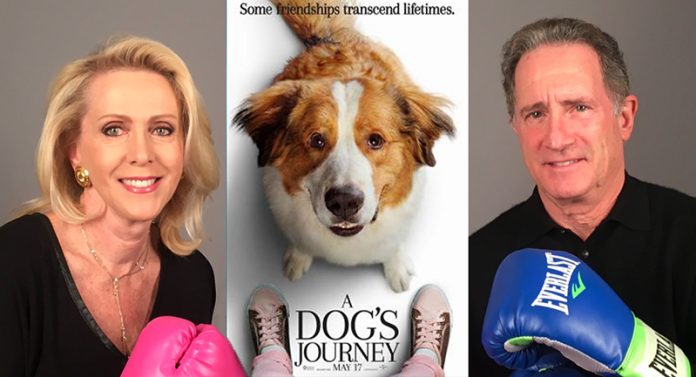 Jeanne And David Kaplan of Kaplan vs Kaplan return with with this week’s movie review of A Dog’s Journey. Did they agree on this movie? Or is David in the dog house?

Jeanne: Bailey (voiced by Josh Gad) was reunited with his “boy”, Ethan (Dennis Quaid) and Ethan’s wife, Hannah (Marg Helgenberger), on theirMichigan farm at the end of A DOG’S PURPOSE. In A DOG’S JOURNEY, Bailey, Ethan and Hannah are enjoying their rural life, which now includes Hannah’s baby granddaughter, CJ.

Hannah’s son was killed in a car accident and his young widow, Gloria (Betty Gilpin) and CJ have been staying with Hannah and Ethan — and Bailey has a new playmate in CJ. Unfortunately, Gloria resents their attentiveness to CJ, especially Bailey’s, so she moves the two of them to theChicago area to pursue her career as a singer.

Meanwhile, Ethan discovers a tumor in Bailey and it isn’t long before he and Hannah must put Bailey to sleep. But before he passes, Ethan implores Bailey to promise to find CJ and protect her. Bailey now has a new purpose. He no longer needs to look after Ethan, now he’s made it his life’s goal to love CJ and keep her safe.

Just like in A DOG’S PURPOSE,  Bailey has recurring lives — as dogs of all shapes and sizes — both male and female — with his one solitary intention. And as CJ (Kathryn Prescott) grows older, she,  along with her best friend, Trent (Henry Lau), begins to realize that each of her dogs have possessed the same soul, all stemming from Ethan’s best friend, Bailey, whom Ethan has always referred to as “Boss Dog”.

When David and I reviewed A DOG’S PURPOSE two years ago, I had mentioned that both of us, along with our daughter, had read the book it was based on of the same name by W. Bruce Cameron. We all loved the novel, but, alas, the movie was AWFUL. It was directed by Lasse Hallstrom and was plagued by bad press due to an incident involving a dog being forced to jump into swirling water. The dog was allegedly distressed and didn’t want to perform, and the situation was exacerbated when word of this was leaked.

It didn’t help that the movie couldn’t capture the essence of Cameron’s writing, even though he and his wife, Cathryn Michon, for whom he wrote the story, worked on the screenplay, as well as the screenplay for A DOG’S JOURNEY. Something was awry —

Fortunately, A DOG’S JOURNEY is a much better film. It’s directed by Gail Mancuso, and it’s probably the fact that she is an award-winning FEMALE director, that makes the difference. This production has a totally different vibe — and improved performances by Quaid and Helgenberger.

Quaid’s relationship with Bailey is more earnest and believable this time, especially as the two of them grow older together. The scene of Ethan holding Bailey as the vet puts him to sleep is incredibly realistic. David and I — and our daughter — very recently had to put our beloved Schnoodle, named Kirby, to sleep — and, as those of you know who have gone through it, it’s not an easy process, to say the least. But Quaid is extremely genuine emoting his grief, as is Helgenberger. It’s a tough moment, but a good one. We were kind of dreading this screening, but it actually turned out to be therapeutic.

And as Bailey becomes other dogs, the vignettes detailing each of them are well executed and so sweet. The sub-story of CJ and her relationships with Gloria and Trent add meaning and depth. Gloria is a disaster as a mother, so young CJ turns to a Beaglier puppy she names Molly, and her best friend Trent. It’s their individual growth which propels the story of A DOG’S JOURNEY and ultimately makes it a satisfying experience.

That’s not to say there aren’t any issues with A DOG’S JOURNEY. CJ’s “career” as a singer/songwriter takes forever to get off the ground, then it’s totally forgotten in the film. And, at one point, Molly, who’s been trained to sniff cancer in people, notices the scent on Gloria, but nothing ever comes of that. It’s completely passed over and never acknowledged.

Mancuso has assembled a talented crew, especially her cinematographer, Rogier Stoffers, production designer, Eric Fraser and composer, Mark Isham. A DOG’S JOURNEY is vastly superior to its predecessor, so do not let that influence you.

All of the dogs who star in A DOG’S JOURNEY areso adorable. And do not be warned off because of witnessing a few dogs leaving this world. It’s all handled so beautifully — with shots of them running and playing down a heavenly path. Doesn’t everyone believe that all dogs go to heaven?

David: Author W. Bruce Cameron followed his hugely successful novel “A Dog’s Purpose” — about a dog being reincarnated again and again, but remembering his first owner — with “A Dog’s Journey”, similar in concept but with great emphasis on the reincarnated canine dutifully protecting the girl he knows as CJ.

Now both novels have been made into movies, and Jeanne and I agree that A DOG’S JOURNEY is easily the better film. We both went to our screening with intense trepidation because we had to put down our own beloved Kirby less than two weeks ago. He would have been 11 in August.

We were not at all sure we could make it through the entire film. In my case, I got weepy, but not because of anything that happened with or to the canine actors, but rather because of the human interactions. While an early scene with Ethan (Dennis Quaid) holding his “Boss Dog” named Bailey as the vet performs euthanasia was disturbing for me, I found myself getting emotional with the relationships between the adult CJ (Kathryn Prescott) and her childhood friend, Trent, (Henry Lau), as well as CJ and her mother, Gloria (Betty Gilpin).

Without consummate performances from Prescott and Lau, A DOG’S JOURNEY might have just been a fluff piece. Director Gail Mancuso, the owner of five dogs herself, has infused this movie with heart and sensibility, and it revolves around the turns by this duo. Gilpin, too, is very moving in her scene with her daughter after being estranged for many years. No melodrama, just real feelings.

Marg Helgenberger plays Hannah, Ethan’s wife and CJ’s grandmother. Most people know her from her recurring role on TV’s “CSI” as Catherine Willows. Her vast experience on stage and screen helped to make her character viable and sympathetic in A DOG’S JOURNEY. She ostensibly feels Ethan’s pain as Bailey is put to sleep. And Quaid’s dependable turn as Ethan is as comforting as it is credible.

The fourth dog that completes the reincarnation cycle is called Max. He is a Yorkshire Terrier and he is a hoot. Somehow Bonnie Judd, the chief dog trainer for A DOG’S JOURNEY, and her team manage to have Max (actually Belle in real life) selectively nip at some cast members while smooching others. Belle, it should be noted, beat out almost 500 other dogs for the role.

No doubt A DOG’S JOURNEY will appeal to dog owners and dog lovers. Even as a member of both groups, I was not that impressed with the film’s opening half. But Mancuso and a foursome of screenwriters set the stage for the evolution of the characters, so I found the second half of the film much improved.

In A DOG’S JOURNEY, when it is Max who is on the brink of death, we hear him say, through the familiar and perfectly executed intonations of actor Josh Gad, “It is my time to say goodbye.” Those of us who have lost pets can take comfort, as depicted in the movie, as all the departed canines are shown romping through a lush