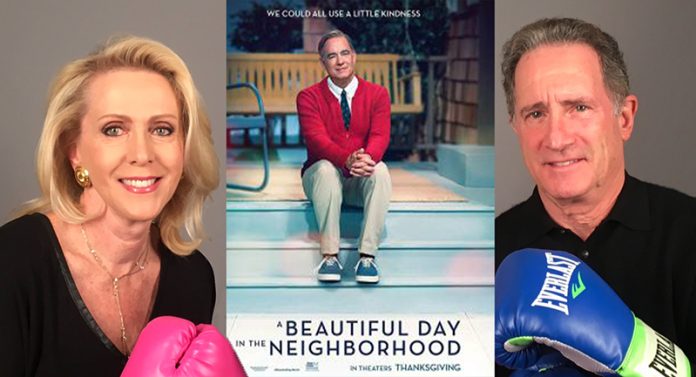 Jeanne and David Kaplan of Kaplan vs Kaplan, bring the hers and his movie reviews of the film A Beautiful Day in the Neighborhood, starring Tom Hanks.

Jeanne: You know, it is a beautiful day in the neighborhood — or at least it was when Fred Rogers was around and doing his TV show, “Mister Rogers’ Neighborhood”. The ever-gentle Mister Rogers personified kindness and compassion, as illustrated by director Marielle Heller’s film, A BEAUTIFUL DAY IN THE NEIGHBORHOOD, inspired by journalist Tom Junod’s profile of Fred Rogers, “Can You Say …Hero?” for Esquire Magazine in 1998. Watching this heartfelt movie about this beloved man makes me realize how far we, as a society, have departed from all of his goodness — and how much we could use him now.

Lloyd Vogel (Matthew Rhys), the character based on Junod, has been assigned by his editor, Ellen (Christine Lahti), to do a brief piece on Fred Rogers for Esquire’s “Hero” issue. Lloyd, an investigative journalist, is not at all happy about this assignment, but then again, he figures he can crack this icon because no one is that good of a person. Little does he know what he’s up against.

Upon meeting Fred Rogers (Tom Hanks), Lloyd is completely flummoxed as the interviewer becomes the interviewee. Lloyd and his wife, Andrea (Susan Kelechi Watson), have a baby boy, and Lloyd is still dealing with childhood issues concerning his father, Jerry (Chris Cooper). Immediately, Fred picks up on Lloyd’s cynicism and pain, and what would usually be a routine discussion for a short article turns into a friendship for Lloyd that will change his life.

There is no one on this planet better suited to play Fred Rogers than Hanks. He not only embodies all the best qualities of this much-loved man, but he can sing, too. When he first appears at the yellow house on set in his worn navy blazer, and changes into his comfy cardigan and tennis shoes, Hanks becomes Fred, so much so that you forget you’re not seeing the real Mister Rogers.

Hanks has mastered Rogers’ quiet, slow cadence in the most soothing way. Whenever he’s on screen, his presence exudes the same calming aspect possessed by the real Fred Rogers. It’s a remarkable performance, one worthy of Oscar consideration.

A BEAUTIFUL DAY IN THE NEIGHBORHOOD is more about Lloyd and his family. Jerry is eager to make amends with his son, but Lloyd is absolutely not interested. Rhys and Cooper deliver some pretty powerful moments in their efforts to reunite as father and son. Cooper is as good as he’s ever been — he’s simply a dynamic force in this movie.

Maryann Plunkett plays Fred’s wife, Joanne, and she and Watson portray the two strong women alongside their accomplished husbands with grace and sincerity. Watson is especially effective as Lloyd’s much-needed supportive partner, who is thrilled to learn that Fred Rogers knows her name.

Written by Micah Fitzerman-Blue and Noah Harpster, A BEAUTIFUL DAY IN THE NEIGHBORHOOD has met my standards of a well-penned script. The writing is always crucial, but for such an iconic figure as Mister Rogers, it’s even more paramount. They have managed to get the tone of Fred Rogers’ legacy perfectly, including some of the more memorable experiences like the children on the subway singing spontaneously the theme song of his TV show. David didn’t get very emotional, but I teared up several times during A BEAUTIFUL DAY IN THE NEIGHBORHOOD.

If you are, or ever have been, a fan of Fred Rogers and his marvelous show, you truly must see A BEAUTIFUL DAY IN THE NEIGHBORHOOD. Hanks manages to bring this wonderful man back to life — right when our country needs it most!

David: There is no actor alive today who could possibly play Fred Rogers other than Tom Hanks. And that’s the way director Marielle Heller felt, as well, except that Hanks rejected the role after reading the script for A BEAUTIFUL DAY IN THE NEIGHBORHOOD. But she persisted. For one thing, she shared the fact that Fred and Joanne Rogers were married on July 9th, Hanks’ birthday. For another, Fred loved Hanks’ portrayals, especially Forrest Gump, and he reportedly saw the film at least 15 times.

This picture represents Heller’s third feature, following the highly acclaimed THE DIARY OF A TEENAGE GIRL (2015) and triple Oscar nominee CAN YOU EVER FORGIVE ME? which netted Melissa McCarthy a nomination for Best Actress in a rare dramatic role. And although I really wanted to love this movie, I did not.

There can be no quibbling with Hanks’ interpretation of Fred Rogers, the gentle giant of children’s programming for 33 years. With just a small change in Hanks’ appearance — a wig and eyebrows — we can believe we’re really watching the TV icon when he comes through the door of Mister Rogers’ Playhouse, doffs his sport coat in favor of a red cardigan, and exchanges dress shoes for a pair of sneakers. Hanks had to lower his usual high energy to slow himself down and become the controlled, measured Fred Rogers. And he succeeds wonderfully.

My problem with the movie is the main story that features an Esquire Magazine writer, Lloyd Vogel (Matthew Rhys), who is assigned by his editor, played by Christine Lahti, to interview Rogers and write a fluff piece of 400 words. Vogel is modeled after real-life journalist Tom Junod who became good friends with Rogers for five years until Fred’s death in 2003 at age seventy-four.

Vogel has anger management issues, especially with his estranged father, Jerry (Chris Cooper). Predictably, after a series of interviews with the persistent Rogers finally getting on Lloyd’s good side, Fred helps him deal with his problems. That’s all well and good, I just wasn’t that moved by the melodrama. That’s not to say there aren’t some touching moments in A BEAUTIFUL DAY IN THE NEIGHBORHOOD.

For one, the crew of his TV show is exasperated because their star is engaged with a young boy and his parents, instead of beginning the taping. The boy is dealing with some issues, but eventually Fred coaxes him into a big hug. Another scene has Fred and Lloyd on the subway where a few girls recognize Fred and burst into the TV show’s theme song. Soon virtually everyone on the subway car is singing, much to Lloyd’s surprise. And Hanks emulates the talented puppeteer as he works the bedraggled Daniel Tiger firmly ensconced on one hand.

The filmmakers also went to great lengths to simulate a miniature city of Pittsburgh where the television show was taped. It’s an homage to the classic studio set that will certainly be appreciated by moviegoers who grew up with Fred.

However, what will probably be an emotional reaction for most movie audiences, as Lloyd and Jerry reconcile, didn’t affect me. That doesn’t make A BEAUTIFUL DAY IN THE NEIGHBORHOOD a bad film, it just isn’t a great one. For a true-to-life, in-depth look at the real Fred Rogers, check out the superb 2018 documentary WON’T YOU BE MY NEIGHBOR?

Helen Albert Farmers’ Market is Back at Plummer Park – COVID...