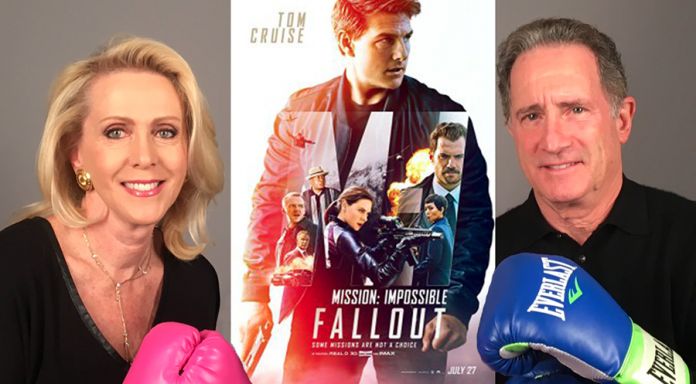 Jeanne: Ethan Hunt (Tom Cruise) is back at it again, careening through the lovely streets of Parisand London — and scouring the mountains ofKashmir. MISSION: IMPOSSIBLE – FALLOUT is truly one of the best action films that I can remember.

Hunt is challenged with the task of recovering three plutonium cores, but when Luther’s (Ving Rhames) life is threatened during the execution of their plan. The plutonium is stolen — again — and Hunt, Luther and Benji (Simon Pegg) make it their “mission” to get it back.

This is just a brief synopsis because  — really — you should see MISSION: IMPOSSIBLE – FALLOUT without knowing a lot of the plot. It’s much more fun that way. Writer/director Christopher McQuarrie has penned a phenomenal script with an engrossing storyline — and always just the right amount of humor. And his direction is superb. The action is virtually non-stop with little or no down time to sully the fast-paced narrative.

McQuarrie and his editor, Eddie Hamilton, have produced a seamless, wildly entertaining summer blockbuster that won’t soon be forgotten. The jarring car/motorcycle chases through Paris are perfectly edited, providing a spine-tingling experience equal to that of the infamous chase scene in THE FRENCH CONNECTION (1971), a William Friedkin masterpiece. The editing inMISSION: IMPOSSIBLE – FALLOUT is beyond exceptional.

And, of course, the cast is amazing. Cruise is his usual cool, collected self. His helicopter sequence is the best — especially when he’s coaching himself aloud. But my particular favorite has always been Pegg, who makes Benji indispensable. Rhames is great, too — the three of them make quite the team.

Rebecca Ferguson reprises her role as Ilsa Faust, a former MI6 agent, and she plays so well off of Cruise. She’s the perfect female foil for him. Henry Cavill is acceptable as August Walker, a CIA operative doing Erica Sloane’s (Angela Bassett) bidding. And who doesn’t love Alec Baldwin as Alan Hunley, the IMF Secretary? He’s awesome — a real crowd pleaser.

Do yourself a favor — if you see nothing else this summer — make sure you do NOT miss MISSION: IMPOSSIBLE – FALLOUT. It’s a huge “See It Now” from the Kaplans!

David: I can think of a lot of ways to describe Tom Cruise’s latest adventure as Ethan Hunt, the Impossible Missions Force (IMF) operative who manages to save the world once again. But one word seems to float above all the others. MISSION: IMPOSSIBLE – FALLOUT is simply incredible.

Featuring what has to be the best chase scene in 47 years of moviemaking since THE FRENCH CONNECTION (1971), this film is exciting from start to its breathtaking finish. (Jeanne and I didnot, as usual, discuss this after seeing the film…we just think too much alike.) Cruise is known for his motorcycle riding skills, but even he outdoes himself in the streets of Paris — going against the traffic flow around the Arc De Triomphe??? Must be seen to be believed!

And although the ending is an elongated one involving two helicopters, it never wears out its welcome. Ordinarily such long, drawn-out scenarios tend to evoke yawns from me, but not so here. Scene after scene becomes one mind-blowing experience after another.

MISSION: IMPOSSIBLE – FALLOUT is packed with just enough humor — what else with Simon Pegg aboard? — to lighten the load, plus the right amount of poignancy to help the viewer relax for a bit. But certainly if you’re looking for high-octane action, filled with unpredictable surprises, this is the film.

Writer/director Christopher McQuarrie already has one Oscar to his name, for writing THE USUAL SUSPECTS (1995). He has collaborated with Cruise on many ventures, including the underrated VALKYRIE (2008) and the well-received — by critics — EDGE OF TOMORROW (2014). I believeMISSION: IMPOSSIBLE – FALLOUT is his crowning achievement from a directing standpoint, and his  efforts, along with those of a superb cast and crew — I especially liked Vanessa Kirby as the White Widow — certainly justify the huge budget of $178 million.

Word-of-mouth will propel this film to attendance heights. Any thoughts of, oh well, another “Mission: Impossible” film are simply not warranted. MISSION: IMPOSSIBLE – FALLOUT is a must see on the big screen.