Home Culture Kaplan vs Kaplan His & Her Movie Reviews – THE FAVOURITE 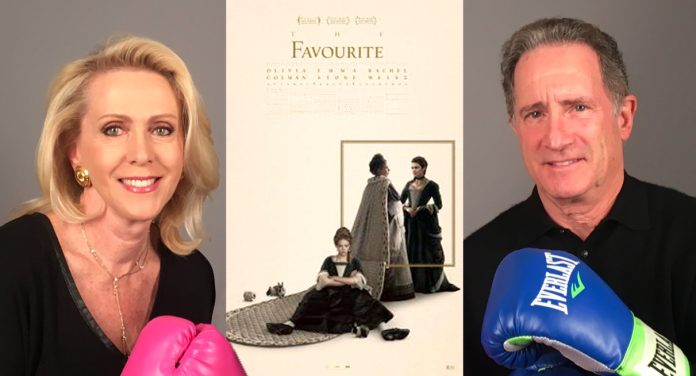 Jeanne: Director Yorgos Lanthimos’ luscious period piece, THE FAVOURITE, boasts three tour-de-force performances by the accomplished actors, Olivia Colman, Rachel Weisz and Emma Stone. Lanthimos has achieved envious success with his two previous films, THE LOBSTER (2015) and THE KILLING OF A SACRED DEER (2017), and now he tackles early 18th century England with a verve, aided by an impressive cast and crew.

Colman is simply brilliant as Queen Anne, the last of the Stuart line of rulers in Great Britain. Alas, poor Anne conceived 17 times, but she either miscarried or the babies were stillborn. Her only living child — a son — passed away at age 11, so Anne has no heirs. But she does have her “other” children — 17 rabbits —which she keeps in cages in her suite of rooms.

Her best friend and confidante, Lady Sarah Churchill (Weisz), also known as the Duchess of Marlborough, is almost constantly at her side, ruling for Anne whenever she, herself, is too ill or indisposed. Sarah holds the position of Mistress of the Robes, the highest title available to a woman at that time. She is also married to John Churchill (Mark Gatiss), the Duke of Marlborough, who commands the English forces in their war withFrance. Sarah is one very powerful female — not an easy task in this era.

The arrival of Sarah’s much poorer cousin, Abigail Hill (Stone), who has lost her place in society because of her father, sets in motion changes in Sarah’s life she could not imagine. A quick study, Abigail soon ingratiates herself into Sarah’s confidence, then, even more ably, she wheedles her way into Queen Anne’s heart. Plotting her course with utmost care, Abigail usurps Sarah and soon becomes Anne’s “favourite”.

Screenwriter Tony McNamara, working from an original screenplay by Deborah Davis, has penned a biting script filled with much humor, witty banter and destructive backstabbing. Billed as a comic tragedy, there is no doubt that these three women are involved in a love triangle destined for dire results.

And each of these female actors is well equipped to carry a film alone, but together — they are dynamic. Colman’s portrayal of this sickly, often meek queen is one of the best performances of the year. She’s child-like one minute, a vicious monarch the next, a loving mother to her bunnies after that.

I found Colman riveting. Even with Weisz and Stone in the same scene, I couldn’t take my eyes off her. And that’s saying quite a bit considering the allure and magnetism of both Weisz and Stone. Emma is especially enthralling as she manipulates everyone around her, even Lord Masham (Joe Alwyn), whom she seduces to become her husband, so she can alter her station in life. Diabolical doesn’t begin to describe both Sarah and Abigail, with Abigail possibly besting Sarah at her own game.

Nicholas Hoult has a plum role as Harley, a member of Parliament and the Queen’s Court. I have adored him since his brief turn in A SINGLE MAN — and here, he is still as beautiful as ever. The costume, wig and make-up suit him — he was born to play in a period piece.

Speaking of costumes, Oscar winner Sandy Powell has designed the gorgeous attire for THE FAVOURITE. She is remarkable and the costumes are divine. Lanthimos has another success to add to his list of interesting and highly unusual films. THE FAVOURITE will not suit everyone, but I found it incredibly entertaining.

David: I must admit after leaving our screening room for THE FAVOURITE I was less than enamored with this film. However — upon reflection, I realized this is an unusually provocative presentation given the time frame and its place in history. Furthermore, the trio of actresses who anchor the story could not be better.

British Queen Anne (Olivia Colman) ruled Britain in the early 1700’s. As portrayed in THE FAVOURITE, she is not your typical regal presence. She is physically unhealthy, overweight, constantly scowling — except when she is having sex — and when she wants her way, it’s best not to get in her way! Virtually every man in the government hierarchy is subservient to her, each of them seemingly afraid to oppose her in any manner.

At times, she appears meek, almost fragile, but then she is capable of exploding instantly, revealing an intensity bordering on utter cruelty. Colman is superb in every way. The much-honored actress truly renders an Oscar-worthy performance.

No less effective are Rachel Weisz and Emma Stone as Lady Sarah and her cousin Abigail, respectively. Once Abigail is introduced into the plot, they vie for Anne’s attention, respect and sexual attraction, each trying to outdo the other in every way.

In the hands of Greek director Yorgos Lanthimos (THE LOBSTER), in collaboration with the original screenplay by Deborah Davis and adapter Tony McNamara, the focus is on these three women who essentially form the power base of the country. The filmmakers freely allow that liberties were taken in composing this story since actual records of the period are not complete.

Although this was a time when England and France were at war, Lanthimos is mostly concerned with the interpersonal relationships of Queen Anne, Lady Sarah and Abigail. It is virtually unheard of for a period piece to feature three women in starring roles since women usually took a backseat to men in the 17th century — Jeanne might say not much has changed in the 21st century.

The women are involved in more than merely sitting around in their regal finery, making polite conversation. Lady Sarah, the virtual ruler ofBritain, is quite adept at pigeon shooting, for example. But the main thrust of their mutual lives is easily their sexual interaction. THE FAVOURITE is not for shrinking violets when it comes to physical intimacy, especially among consenting women. Colman, in particular, openly displays her pleasure as Abigail services her. Not necessarily shocking in 2018, but 1700?

Beyond the sexual exploits of Queen Anne, we get a peek at what the younger castle aristocrats do in their spare time. Besides shooting pigeons as if practicing skeet, they conduct duck races, and in one odd sequence they fling blood oranges —  akin to rotten tomatoes — at an overweight homosexual running around nude.. Clearly THE FAVOURITE is not  a humorless drama.

Lanthimos’ crew includes 11-time nominee and three-time Academy Award winner for costume design, Sandy Powell. Her Oscars were well deserved for THE YOUNG VICTORIA, THE AVIATOR and SHAKESPEARE IN LOVE. She is probably in line for at least another nod.

Nicholas Hoult plays Robert Harley, who in real life became Queen Anne’s chief minister. In the movie, however, his closeness to Anne is thwarted by Sarah, but enhanced with the arrival of Abigail. Hoult’s attire is typical of the era with an oversized wig et al, but he pulls it off handsomely.

THE FAVOURITE is a sumptuously photographed period piece with fine acting all around. Stone, in particular, seems effortless as her character evolves from a lowly scullery maid to a lady of power by virtue of Anne’s preference for her. But the moral here might be  something along the lines of “be careful what you wish for.” The look on Abigail’s face in the closing moments of the film says it all.