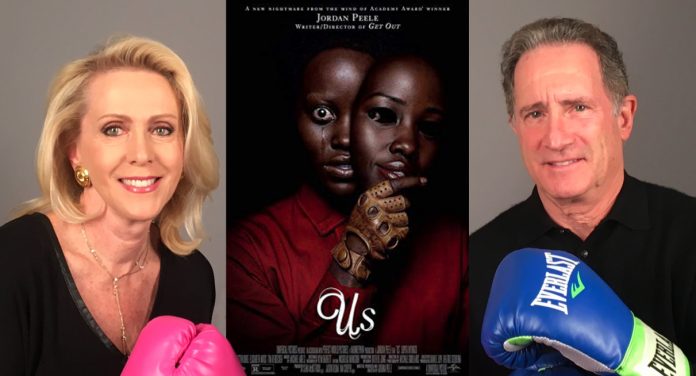 Jeanne and David Kaplan of Kaplan vs Kaplan return with the his and her film reviews of the US movie by Jordan Peele, starring Lupita Nyong’o.

Jeanne: Full disclosure — I had stopped seeing scary movies, but I did see GET OUT because of all the fuss — and now the Us movie. Jordan Peele has cemented his place in horror film hierarchy with this disturbing and engrossing tale of evildoppelgängers.

Us begins in 1986 with young Adelaide, played by Madison Curry, wandering off while at an amusement park with her parents, seaside in Santa Cruz, California. Moving to present day, Adelaide Wilson (Lupita Nyong’o) and her husband, Gabe Wilson (Winston Duke), are the parents of Jason (Evan Alex) and Zora (Shahadi Wright Joseph). Gabe is determined to take the family to the beach for a vacation, the same beach where Adelaide got lost as a child. They have plans to meet up with their friends, Kitty (Elisabeth Moss) and Josh Tyler (Tim Heidecker) and their teenage twin daughters.

Adelaide has a strong sense of foreboding, but relents to Gabe’s insistence. And even after they arrive, Adelaide is haunted by her strange memories of this place, and presses Gabe to leave immediately after only one day of surf and sand. To her credit, her fears come true when Jason informs his parents that a family of four is standing at the end of their driveway — late at night — in the dark.

Without giving too much away, the unknown family looks exactly like the Wilsons — clad in red jumpsuits, one fingerless glove and holding large gold scissors. Perfectly weird, huh — trust me, you have no idea. Known as the “Tethered”, there are doppelgängers for everyone. But it seems that only Adelaide’s “twin”, Red, the leader of the Tethered, has the ability to speak. The others just groan and growl, which makes these scissor-wielding fiends that much creepier.

Nyong’o’s dual portrayals are gripping — totally riveting. As Adelaide, her fierce protectiveness of her children is electric, and as Red, with her intensely scratchy voice, she is terrifying. She gives two tour-de-force performances, so one has to wonder for which she’ll receive another Oscar nomination.

I can’t say that I “love” Us — or GET OUT, for that matter. I still don’t enjoy the “thrill” of being SCARED OUT OF MY MIND! I used to — but as I got older, the idea of being constantly on-edge during a film, lost its appeal. But Peele has honed his craft and has managed to frighten the bejesus out of most of his fans — and rightly so.

His directing skills just keep getting better, as he elicits such strong performances from his actors — especially the younger ones. The kids — all of them — are truly amazing. I’d like to know how they managed to get through this production without any residual terror — or maybe they didn’t. All of this along with his innate sense of capturing his shots perfectly imbues Us with the sense of dread we have come to expect from Peele.

But, lastly — it’s the writing. Peele has concocted one helluva story, with enough twists and turns to keep even the most ardent student of horror guessing. His ability to shock is first-rate, and yet he manages to add just enough levity to allow the audience a breather — for a split second only. There are many shocking scenes, but one in particular involving the Tylers, is especially jolting. (And Moss gives her usual fabulous turn.) Let’s just say — the doppelgängers are nasty — and quick like a bunny. And — there are a lot of bunnies around.

Anyway — The Us movie  is everything that dedicated fans Peele has garnered as the new master of fright deserve. It’s a doozy!

David: I have always believed one of the most difficult things to achieve in moviemaking is a good horror film. Writer/producer/director Jordan Peele’sdoppelgänger thriller Us will terrify movie audiences 50 years from now. It is certain to become a classic..

Peele opens his story with a few comments about abandoned tunnels in America, the inference being that we’re not entirely sure what may be living down there. Trust me, we find out in short order.

Although Us contains some brutally violent scenes, Peele has not lost his sense of humor. He manages to insert quieter moments, as when Elisabeth Moss’ doppelgänger character, Dahlia, applies lip gloss in a seductive manner. Her facial expressions suggest both beauty and evil in the space of 30 seconds.

The rest of the cast is first-rate and on a par with Peele’s writing. Winston Duke plays Gabe, husband to Adelaide (Lupita Nyong’o), and his hulking 6’5″ frame belies his character’s lighthearted personality — until all hell breaks loose at the family’s vacation home. Their two children, Zora and Jason, are exceptionally played by Shahadi Wright Joseph and Evan Alex — wonderful choices that help to make this film a success. But it is Nyong’o’s performance in a dual role that is astounding — her best ever. It is a marvel, impossible to forget.

Peele’s use of music demonstrates how important that element is to movies of this genre. I compare it to the music by Disasterpeace in the 2015 chiller IT FOLLOWS, and to the incredibly scary composition that Alfred Hitchcock used in PSYCHO almost 60 years ago. And Peele complements the music with his jarring use of sound, whether it’s rides in full throttle at an amusement park or a pair of scissors penetrating a car windshield.

If you dare to see the Us movie— and you should, whether you like horror films or not — you will witness that Peele gives a whole new meaning to the 1986 benefit event Hands Across America. He also infuses his movie with today’s technology, as he does with voice command mechanisms akin to Alexa, which he calls Ophelia. These touches truly exemplify the man’s creativity.

So, is this film scary? Let’s just say that our packed screening audience was eerily silent, other than scattered chuckles reacting to Peele’s occasional use of humor. And while I sat through the entire movie with clenched fists, Jeanne buried her face early and often in anticipation of whatever evil was lurking around the corner.

One final note: Us contains a major twist at the end that I certainly did not see coming. It will have moviegoers buzzing as they exit the theater.