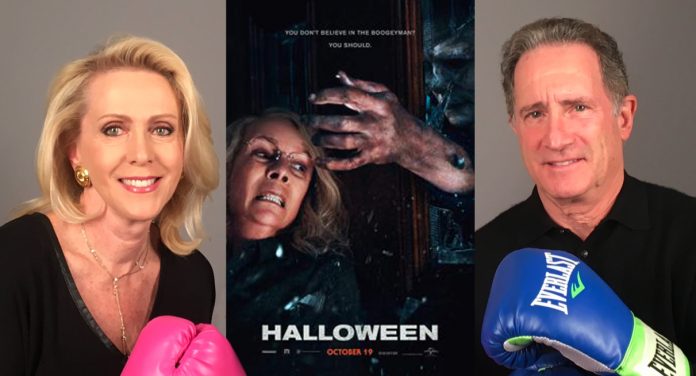 Jeanne: I have pretty much given up on horror films. I no longer enjoy being scared/jarred by slasher movies. But the original HALLOWEEN, starring Jamie Lee Curtis in 1978, really did have a profound effect on me — it scarred me — and it was definitely the beginning of the end of my love for this genre.

Thus, despite my misgivings, I made the monumental decision to see HALLOWEEN (2018) — once again starring Ms. Curtis as Laurie Strode. It’s 40 years later and Laurie is still haunted by the serial killer, Michael Myers, who tried to end her life that fateful Halloween night.

She has raised a daughter, Karen (Judy Greer), whose only child is Allyson (Andi Matichak), Laurie’s beloved granddaughter. Everyone has suffered because of the masked killer who has a penchant for brutal murders. But Karen has never really understood Laurie’s obsession with trying to protect all of them.

Per usual, we have the requisite prison transfer of mental health patients — the night beforeHalloween — I mean, really, what could go wrong there? And, did it have to be the night before Halloween — they couldn’t have waited another day or two? Then, it’s yet another bus crash, caused by none other than that really creepy dude, Michael Myers (Nick Castle/James Jude Courtney), allowing all of the crazed inmates the opportunity to run away. Myers’ escape unleashes a trail of terror throughout the hamlet of Haddonfield, Illinois, right on Halloween night — seriously?

Myers manages to slay an awful lot of innocent bystanders in his quest to get to Laurie. It’s a ludicrous, bloody, unnecessary swathe of death and destruction, beginning with a young boy who, along with his father, is in the wrong place at the wrong time.

I am so appalled that writers Jeff Fradley, Danny McBride and David Gordon Green, who also directs, begin Myers’ killing spree with this sweet kid, that the rest of the film was totally ruined for me. Are you kidding me, they had to kill off a child? This is entertainment? Not long after that, Myers breaks into a house and hammers a mother to death. He walks by a crib where a baby is crying and, so help me, had he killed the infant, I would have walked out!

Curtis is the only good feature of the movie, but even she can’t salvage this mess. HALLOWEEN is gory and stupid, with way too much gratuitous violence. See it at your own risk — the risk of being bored to death.

David: It’s been 40 years since the original HALLOWEEN scared the bejeebers out of movie audiences, and I’m not convinced that a remake was necessary. Yes, younger horror fans will likely flock to see this latest version, written and directed by David Gordon Green, who brings back Jamie Lee Curtis to reprise her role as Laurie Strode. But unequivocally the original was far more frightening.

I will say the opening sequences are truly unnerving. Investigative journalists Aaron (Jefferson Hall) and Dana (Rhian Rees) visit the mental hospital where Michael Myers (a.k.a. The Shape, portrayed by Nick Castle and James Jude Courtney) has been incarcerated for 40 years, without uttering a single word.

However, the rest of the movie has a hard time living up to this ultra creepy “before-the-opening-credits” segment. On the bright side, the music for the entire film, by legendary (and original) director John Carpenter, his son Cody and Daniel A. Davies, is as eerie a score since Disasterpeace provided the music for the surprise hit IT FOLLOWS in 2014.

Some of the earlier scenes in HALLOWEEN do a good job of building the suspense, as when Vicky (Virginia Gardner), babysitting for Julian,

checks his bedroom for an intruder the little boy insists he saw. Julian (Jibrail Nantambu) provides the comic relief. He actually elicits big audience laughs in a movie devoid of them.

A couple of flaws will not allow me to rate this film a “See It Now”. Laurie is a crack shot with a rifle, as exhibited in her target shooting, yet somehow she can’t kill The Shape at close range. As for Michael Myers, he continually comes back from major gunshot wounds and even getting run over by a car can’t keep him down. How is he so indestructible? It gets tedious after a while.

Jeanne may write that the violence is gratuitous, but I view Myers’ random killing spree as reinforcement of the notion that he must be stopped. HALLOWEEN is not terribly original — Green borrows at least one scene from the original, i.e., one of the victims is pinned to a door with a knife through his neck. So if you’re looking for a really scary movie, this isn’t it —even Jeanne managed to get through it without hiding her eyes.