Meet film critics Jeanne and David Kaplan–a husband and wife duo who offer hers and his opinions on the latest movie releases. Here we get their she said/he said review of the movie MAMMA MIA! HERE WE GO AGAIN!, which opened in theaters nationwide today.

Jeanne: Summer is now in full swing with the arrival of MAMMA MIA! HERE WE GO AGAIN!. It’s such fun that after one of the more rousing musical numbers, I made a mental note to purchase the DVD, just so I can play it whenever I need a pick-me-up — and a big smile!

The beautiful and spirited Lily James plays young Donna Sheridan, the role made famous by Meryl Streep in the original MAMMA MIA! ten years ago. MAMMA MIA! HERE WE GO AGAIN! affords us the delicious opportunity to learn how Donna managed to get pregnant 25 years ago and not know who fathered her lovely daughter, Sophie (Amanda Seyfried). Following university, Donna leaves behind her two best friends — and Donna and the Dynamos band mates — Tanya (Jessica Keenan Wynn) and Rosie (Alexa Davies) to travel to the picturesque, albeit fictional, Greek island, Kalokairi, by way of Paris. 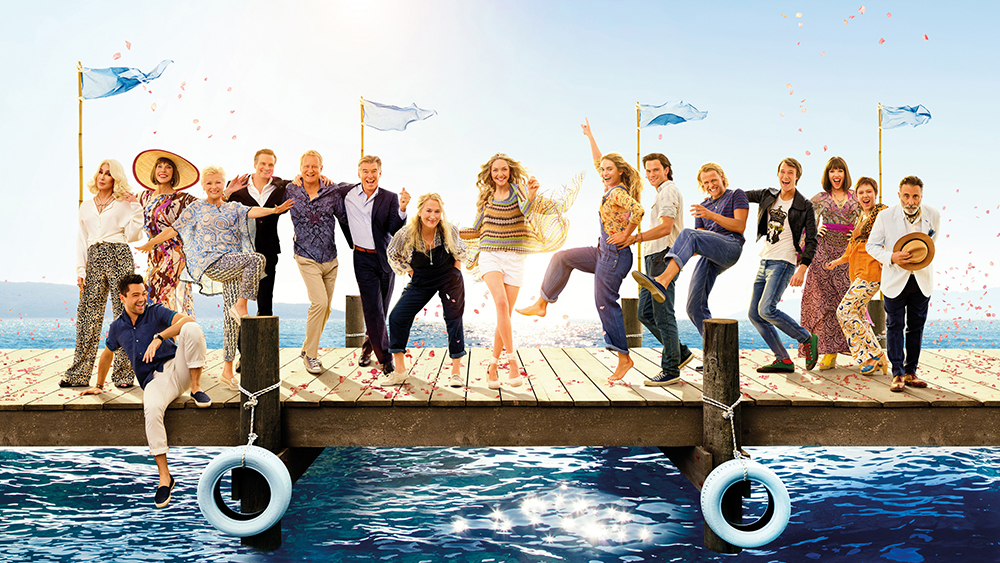 It is in Paris where she meets Harry (Hugh Skinner), the first of her romances. Leaving him behind — and missing her ferry to Kalokairi — it is Bill (Josh Dylan) and  his big, beautiful sailboat who comes to her rescue. Finally, alone in an abandoned farmhouse high on a hill in Kalokairi, in the middle of a huge rainstorm, Donna flags down Sam (Jeremy Irvine) on his motorcycle to help her save a trapped horse. Okay — yes, it’s a tad ridiculous, but who cares?

Sophie, married to Sky (Dominic Cooper), is all grown up and has finally made Donna’s dream of turning the dilapidated farmhouse into a luxury hotel, come true. Sky has been off in NYC learning the hotel trade while Sophie and her stepdad — and one of her fathers — Sam (Pierce Brosnan) have worked to transform the property. As they prepare for the opening night party, Tanya  (Christine Baranski) and Rosie (Julie Walters) arrive, but Sophie’s other two fathers, Harry (Colin Firth) and Bill (Stellan Skarsgård) are unable to make it. Even Sky is stuck in New York, unsure of  his future — should he stay or return to Kalokairi?

MAMMA MIA! HERE WE GO AGAIN! is unbridled summer fun. ABBA‘s classic songs have certainly not lost any of their luster. James and Skinner do a magnificent rendition of “Waterloo” in a French bistro, reminiscent of Busby Berkeley’s exquisite precision. And that’s exactly what makes MAMMA MIA! HERE WE GO AGAIN! So exhilarating! The musical numbers are perfectly choreographed — and so very entertaining!

James is the brightest light amongst many stars. She is so effervescent and delightful, you cannot help but smile and immerse yourself in her wonder. They’re all great, especially the new young trio of men playing James’ paramours.

Baranski is beyond a hoot. I sincerely wish she was in everything! And amazingly, they all look like they’re having “the time of their lives” — REALLY!

Even after all the “takes” that go into making a movie, every actor — every extra — looks completely thrilled to be where they are.

I know I will take some heat for this, but I could have lived without Cher. She looks like she’s trying to channel Lady GaGa. I kept wondering why Andy Garcia was in the movie, and then when Cher appears, we find out.

Meh — just a distraction. It didn’t add anything to MAMMA MIA! HERE WE GO AGAIN! for me, but I’m sure others will love her.

None of this matters, MAMMA MIA! HERE WE GO AGAIN! is fabulous summer entertainment. If you see this and don’t hum along — see a doctor, cuz you need help!

David: I have a strong penchant for movie musicals (LA LA LAND notwithstanding) that feature talented singers and dancers. And I have always loved ABBA’s recordings. Their melodies and harmonies are never tiresome. So I was looking forward to this sequel, and came away completely entertained. MAMMA MIA! HERE WE GO AGAIN! is literally fun for the whole family.

The movie is a crowd pleaser that showcases the substantial  vocals of Lily James and Amanda Seyfried. James plays Donna (Meryl Streep in the original MAMMA MIA) in her early years, while Seyfried plays Donna’s daughter, Sophia, in present day. The bottom line is I could watch James perform endlessly. She was marvelous in CINDERELLA (2015), and here she sings and dances to perfection. Watching her belt out the title song alone is worth the price of admission. Seyfried is a close second, a great singer in her own right.

It’s also fun to see the two generations of characters alternating back and forth from 25 years earlier to their present-day selves. One example: Bill doesn’t age as well as the others. The handsome, virile younger Bill (Josh Dylan) morphs into his older version (Stellan Skarsgård) with less than ideal results. One highlight is the presence of Christine Baranski as the adult Tanya. Besides delivering some amusing dialogue and great singing, Baranski is the film’s fashion plate, as usual.

MAMMA MIA! HERE WE GO AGAIN! is simply solid entertainment. The ensemble numbers are terrific, and the ending is a unique touch which unites all the cast members on one stage. The film is a very pleasant diversion for a couple of hours from all the negativity that is currently engulfing our nation.