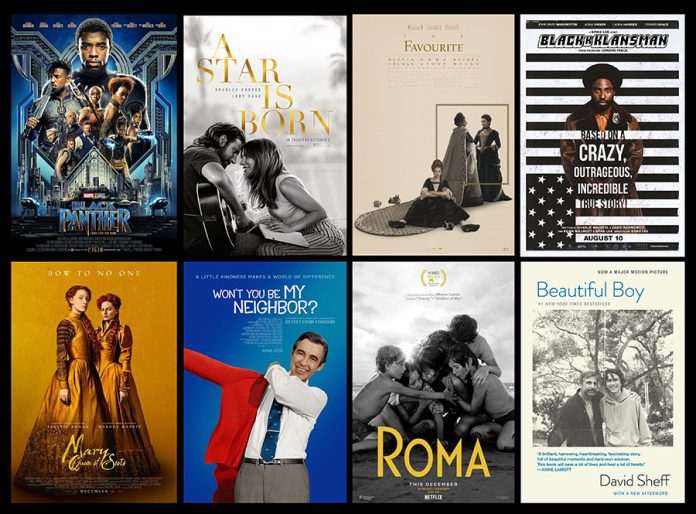 Award season is upon us. Jean and David Kaplan of Kaplan vs. Kaplan list their 10 best and some of the worst films of 2018.

JEANNE’S BEST AND WORST FILMS OF 2018

A naughty — not nice — romp through Queen Anne’s court in 18th century England has won out over all others for me this year. Led by the incomparable Olivia Coleman as Anne, surrounded by Rachel Weisz and Emma Stone, Yorgos Lanthimos has capitalized on the Year of the Woman with his take on a crafty, daffy ruler and her two “favourite” subjects.

racehorse named Lean on Pete, is definitely one of the best of 2018. It’s the kind of film people have a tendency to ovrelook, which is such a shame, as it beautifully depicts the worthiness of hope, friendship and, most importantly, love.

Director Alfonso Cuaron’s ode to his chuildhood in Mexico City is a moving, compassionate tribute to those who take care of us. Shot in black and white,

Cuaron makes every day in the lives of this fractured family soft and beautiful. It’s memorable filmmaking, the kind this cinephile lives for.

In terms of documentaries, nothing is better than WON’T YOU BE MY NEIGHBOR?. Morgan Neville has once again proven his mastery in this genre and provided us with a loving and truthful biopic of this gentle man, Fred Rogers, who devoted his life to making every day a little less frightening for children — of all ages.

The fact that a sequel can actually be as good

as — if not better than — the original is astonishing — something that almost never happens. But PADDINGTON 2 is that anomaly — a marvelous effort by director Paul King, his phenomenal cast, delicious set designs and costumes. A children’s film that isn’t just for children.

A visually stunning love story directed by Pawel Pawlikowski set during the Cold War in the 1950s. Starring the gorgeous Joanna Kulig and handsome Tomasz Kot as lovers whose story spans manyyears throughout Poland, Germany and Paris, these two actors exemplify the raw emotions of love and desire in such harsh times.

Viggo Mortensen and Mahershala Ali give two of the best performances as an Italian-American chauffeur and bodyguard for an African-American jazz pianist on a tour through the Deep South in the 1960s. A film that can genuinely make you laugh — and cry — while telling a provocative and worthy story is always a treasure.

Tom Cruise has created a series in MISSION: IMPOSSIBLE that has never failed to entertain. But MISSION: IMPOSSIBLE – FALLOUT has wildly surpassed all of the others which have come before. It’s an action-packed, fast-paced ridiculously entertaining and — at times — downright hilarious blockbuster, worthy of that term. If you haven’t seen it — find it!

2018 served up quite a few comic book heroes, but, by far, the best is BLACK PANTHER. A joy to experience in all of its glory, director Ryan Coogler’s efforts have cemented Chadwick Boseman as T’Challa or Black Panther, along witht he entire cast, in the annals of movie history.

3. A WRINKLE IN TIME

Beautifully acted and intelligently written, A STAR IS BORN is an ambitious, even monumental achievement in filmmaking. Both Bradley Cooper and Lady Gaga deliver Oscar-worthy performances.

Two extraordinary performances by Viggo Mortensen and Mahershala Ali, along with an exceptional script, make GREEN BOOK easily one of the best films of the year. An emotionally-charged finale that is perfectly staged by director Peter Farrelly closes out this wonderful story.

This stunningly powerful indictment of racism in America should be remembered as one of the best films of this — or any other year. Spike Lee’s best movie.

Featuring what has to be the best chase scene in 47 years of moviemaking since THE FRENCH CONNECTION (1971), this film is non-stop excitment from the first scene to its breathtaking finish.

Sheer entertainment, a total delight and an instant contender for the Academy Award for Best Animated feature.

6. WON’T YOU BE MY NEIGHBOR? Fred Rogers passed away in 2003 at age 74, but after seeing the depth of this man’s commitment to children and his passion for spreading good will — let’s just say we could really use him right now.

Ruth Bader Ginsburg’s impact on behalf of women’s rights is so vital in American history, it would have been a travesty not to have her amazing life — along with her musings and her humor — as a permanent record on film.

An unusually provocative presentation given the time frame and its place in history. Furthermore, the trio of actresses who anchor the story could not be better.

Both Margot Robbie and Saoirse Ronan as rulers of England and Scotland are sensational in their roles. The expert cinematography, lavish costume design and especially the stirring musical score, along with the fine cast make MARY QUEEN OF SCOTS a brilliant achievement.

Steve Carell is a father desperately trying to save his drug-addicted son, played by Oscar nominee Timothée Chalamet (CALL ME BY YOUR NAME). It’s a true story that, while often difficult to watch, is a seamless film about the drastic impact the disease of drug dependency has on family members.

IF BEALE STREET COULD TALK, ISLE OF DOGS, LEAN ON PETE, LOVE & BANANAS: AN ELEPHANT STORY, MARY POPPINS RETURNS, ON THE BASIS OF SEX, ROMA, WEED THE PEOPLE

1. A WRINKLE IN TIME

3. FANTASTIC BEASTS: THE CRIMES OF GRINDELWALD