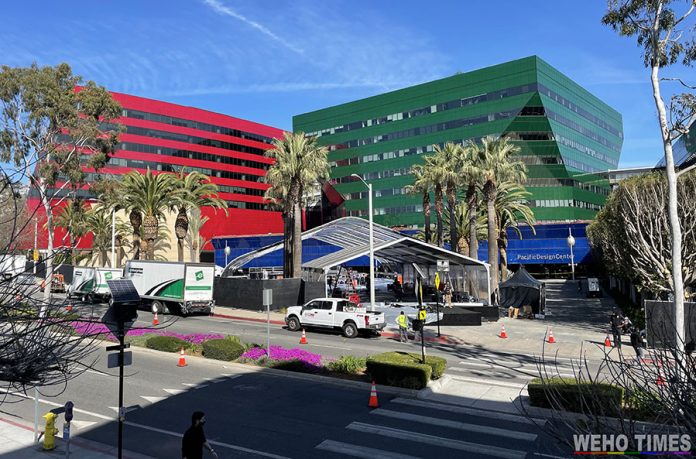 A special event is coming to West Hollywood’s Pacific Design Center for Super Bowl LVI weekend. The West Hollywood West Residents Association WHWRA reports that Justin Bieber and Drake are scheduled to perform this weekend on Friday and Saturday.

The event will host 1,500 ticketed guests each night and include amplified sound, including live music for one hour each night. Justin Bieber is scheduled to perform Friday night and Drake Saturday night. WHWRA has been informed that there will be sufficient security and extra sheriff deputies assigned. Limousines are required to park in the Cedars lot on San Vicente.

Construction of a giant tent is already underway. Northbound San Vicente Blvd between Melrose and Santa Monica Blvd is scheduled to be closed Friday and Saturday from 6 p.m. – 3 a.m.

If you hear excessive noise coming from this event, do not hesitate to contact the event coordinator Jess Brown at 816-786-9134 and/or the City of West Hollywood Code Compliance Officer on Duty at 323-848-6516 (leave a message).

Super Bowl LVI will be the upcoming championship game of the National Football League (NFL) for the 2021 NFL season. It will be played between the National Football Conference (NFC) champion Los Angeles Rams and the American Football Conference (AFC) champion Cincinnati Bengals. The game is scheduled to take place on February 13, 2022, at SoFi Stadium in Inglewood, the home stadium of the Rams, marking the second-consecutive and second overall Super Bowl to feature a team playing in its home stadium. It will also be the first Super Bowl to be held on the second Sunday of February.

There are several viewing parties taking place in West Hollywood this weekend.

Hahaha this is truly a big joke. There is absolutely no way in hell they are doing sound checks nor will code compliance do anything about it. Celebs get carte blanche to do whatever they want in WEHO and the city and council fall all over themselves gushing. It’s honestly pathetic. Stop pretending to care. Ugh