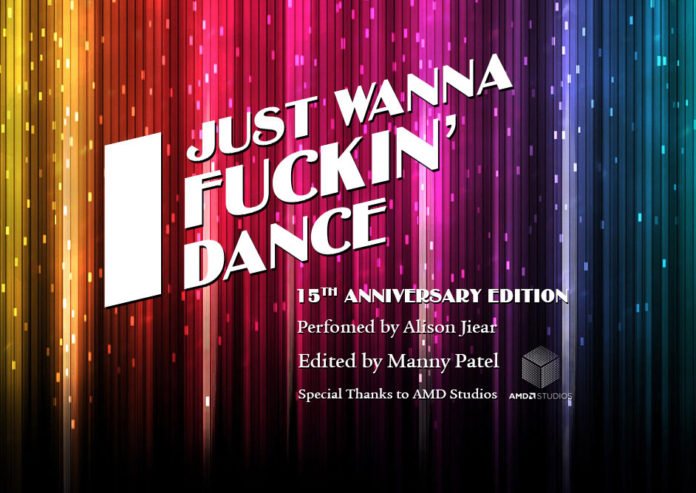 In April 2003, “Jerry Springer: The Opera” debuted in London’s West End. Alison Jiear played a small part in the musical as a voluptuous pole dancer and sang a number written by Richard Thomas called  “I Just Wanna Dance”.

The musical started to lose popularity in 2004 and so a shelved projected to remix all the songs as dance tracks were abandoned.

During the weeks leading up London Pride, DJ Wayne G had let David Inches, one of the owners of Heaven Nightclub in London, listen to the shelved track of “I Just Wanna Dance”.

David wanted to use that as a Pride Anthem and so a performance track was completed the Wednesday before the Friday afternoon rehearsal during the first week in June 2004. On that Wednesday, David Inches told me that he had all these screens up around the club for a private event the day before, so we should use them and have clips of people dancing.

With no time to spare, I went to the other owner of Heaven Nightclub’s house, Paul Savory and grabbed a bunch of movies from his DVD collection and started to edit. 17 hours later, I had a rough cut in time for the rehearsal and not have been able to use all the movies I wanted to.

That version was used for the final performance. I thought it was the worst edit I had ever done and I never wanted to see it again.

Everyone but me loved it and especially how I booked ended the piece. The only reason I did that is because I ran out of time editing and it was easier to reverse the beginning of the ending!

At the end of the performance, I thought I’d never hear the song ever again and I didn’t want to see the video.

Well, I was wrong. The video started to be sold in Gran Canaria where there weren’t any copyright laws and the song became an anthem Brit just for the London Pride, by the world. I only found this out a year later when someone showed me my own video at a house party!

Suddenly, bars and clubs around the world were playing it and in some cases every 30 minutes. I was getting texts from all corners of the globe from friends that were traveling that had seen it being played.

The video had gone viral before YouTube was ever a website. And the irony was that when it first went on YouTube, it kept on getting taken down due to copyright infringement. Let’s face, it, I don’t own “The Sound of Music”.

The video’s popularity just grew and grew and it’s probably now been seen millions of times. But I felt it was never complete and that it started to look dated once HD was rolling out into homes.

So in 2013, once marriage equality passed in the USA, I decided to give the song a facelift. I felt it was better than the original but by that point, the world didn’t need the song as much, as we had won what the LGBTQ community had fought for.

Alison Jiear went on to become a star on Britain’s X Factor the following year and Wayne G had remixed and released the song the year before.

With everyone finally moving on, I really thought the song was done. And then on top of all that I started to quickly lose my sight from glaucoma. I lost most of the sight in one eye and thought I’d never edit again.

Again, I was wrong. In 2017, a dear friend of the LGBTQ community in LA, JD Disalvatore, sadly passed away from Cancer in August.

She was an amazing human being who helped everyone she met and was just a beacon of light. She also had a foul sense of humor and she loved “I Just Wanna Dance”. She would watch it every day to get her in a happier state of mind.

JD told me that she wanted it played at her funeral. – BTW I get that a lot, lol.

So about 3 weeks ago, I started editing again and redid the whole video from scratch. Mainly for JD, but also for all of us who have had such a hectic 2017.

I had a flood at the end of last year in my apartment and I sadly lost my computer. Thanks to Roy Taylor at AMD Studios, he saw my videos on Youtube and gave me the state of the art computer that’s faster than anything on the market.

With that, I was able to make “I Just Wanna Fuckin’ Dance” as it should have been made all those years ago, with every icon scene from as many movies as I could fit in there!

I have to give thanks to my friends Ingenue, Colin Deane, Michael Fossat, Tammi Scott-Lynch and Casey Monroe who gave me notes after the first 60 odd edits before it finished the final version!

We played it at JD Disalvatore’s memorial last Sunday at the LGBT Center in Hollywood and was an amazing success. People were crying and laughing and clapping all the way from the start!

And then Alison Jiear chimed in with her appreciation for the new version shortly afterward.

So here we are! About to hit 2018 and with one message…. “I want to do some living. As I’ve done enough dying. I just wanna dance. I JUST WANNA FUCKIN’ DANCE”