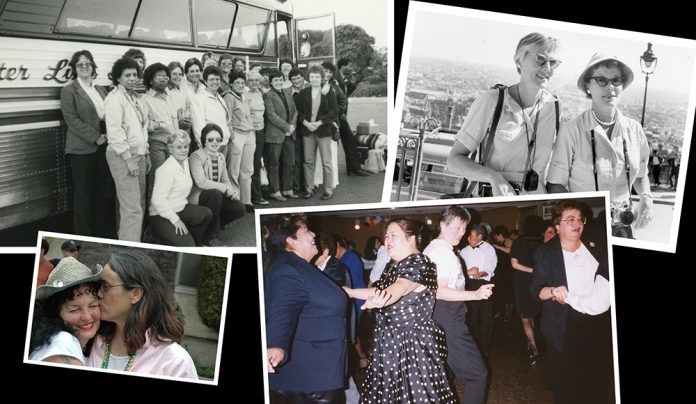 The June Mazer Lesbian Archives will feature “OUT OF THE BOX: RARE OR UNSEEN PHOTOS,” exhibition at the LGBTQ Center Long Beach (2017 E. 4th Street Long Beach, CA 90814), from December 22 to January 20 with a reception from 2pm-4pm, on December 22.

The expansive show features photographs and ephemera spanning almost 100 years, from more than 20 of the many collections from Mazer–the largest archive on the west coast dedicated to preserving and promoting lesbian and feminist history and culture.

“Out of the Box” will be on view during the Center’s regular hours: Monday-Friday, 10AM-9PM; Saturday, 10AM-4PM; closed on Sundays. 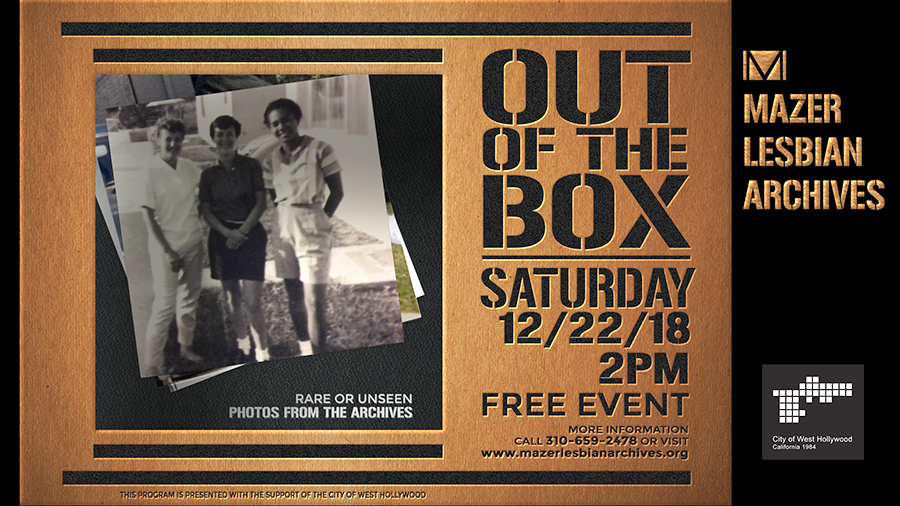 The exhibit was curated by the Archives’ Director of Communications Angela Brinskele, along with Julie Botnick, Breann Kramer, and Suzette Zazueta. Their aim was to reveal some of the most powerful and intimate images from collections donated to the Archives. The women pictured represent a diverse array of figures, and each photo celebrates aspects of their personal stories and identities — calling attention to the beauty and influence of their ordinary life. While there are instances of pain, solitude and political pushback, the show intends to emphasize the perseverance and strength of self-love and community, allowing lesbians to live, thrive and continue making memories and legacies.

Highlights include photographs from Marie Cartier and her wife, Kimberly Esslinger.

Cartier is a scholar, author, visual/performance artist, queer activist, poet, and theologian. She and Esslinger married in 2008, just before the November election when the passing of Prop 8 made same-sex marriage illegal in California. They spent their honeymoon protesting in the streets for marriage equality. Also striking are images from Pat Larson and Jenny Meyer, who met in 1961 when Meyer was in the United States Air Force. She went AWOL to be with Larson, then arrested and court-martialed for her actions. She eventually received an honorable discharge when she briefly wed a gay man who was looking to marry to move up in the business world. Larson and Meyer have been together ever since, almost 60 years. Both couples will be in attendance at the reception on December 22.

Among the groups represented in the show is the Southern California Women for Understanding (SCWU), the most successful lesbian organization in history. They were an educational organization that spanned from 1976 to 1999, and had hundreds of members who met regularly. Lesbian News described it as the “largest lesbian support group in the country.”

The June Mazer Lesbian Archives was founded in 1981 in Oakland, CA. The Archives moved to Southern California in 1985, and into the Werle Building – a 1940 Streamline Moderne structure owned by the City of West Hollywood – in 1989. The organization has been run solely by volunteers for most of its 37 years, operating with support from private donors and the City of West Hollywood. In May, the Archives celebrated the grand re-opening of its space in the Werle Building, which underwent a historic renovation.

This program is presented with the support of the City of West Hollywood.

To make an appointment to visit, email contact@mazerlesbianarchives.org or call 310-659-2478.