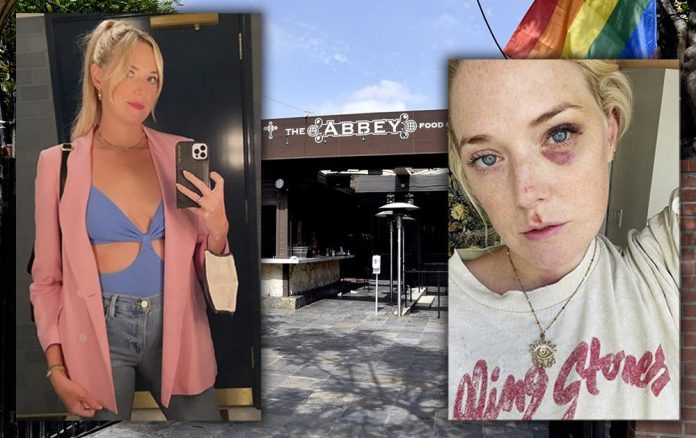 The Honorable Judge Daniel S Murphy tossed a defamation and trade libel claims brought by Abbey Restaurants And Bars USA-LA LLC against a comedy writer and actress, Haely Smalle (aka Haely White) who made false allegation that she was drugged by a bartender at The Abbey on July 29, 2021 via her social media.

“I believe I was severely drugged (“roofied”) by a bartender at one of LA’s most popular gay bars, The Abbey,” White posted on her Instagram account on August 3rd. “Within 15 minutes having half of my ONLY drink there, I collapsed, vomited at the bar and continued until I got home. I couldn’t function. I barely made it inside my home (see: face). I’m happy I’m alive to share this. If you know me, you understand this would never happen to me. Not a huge drinker, plus I never vomit when drinking.”

She posted a photo of herself with cuts and bruises on her face. Then called for a boycott of the The Abbey.

The Abbey issued a statement saying it took these allegations very seriously and would conduct an investigation.

According to a followup Instagram post, Smalle (who goes by Haely White on her social media) stated that The Abbey showed her video footage following her every move, which debunked her claims. She retracted her accusations and stated that she did not see any wrongdoing on the bar’s behalf.

However, in a later post she added that she wasn’t sure she wasn’t drugged at the Abbey and added that footage showed her passing out.

The Abbey responded that post with a lawsuit to the tune of $5 million dollars in damages for defamation and breach of the settlement they made.

The Los Angeles Superior Court Judge issued a ruling on Tuesday, allowing only the Abbey’s claims for breach of contract against Smalle to go to trial. The judge heard arguments Wednesday morning, took the case under submission and then ruled Wednesday afternoon.

The Abbey’s attorney, Christopher Reeder, previously dropped a claim for breach of the covenant of good faith and fair dealing.

My News LA reports that the judge based his decision on online reports that White read of others allegedly being served spiked drinks at the Abbey. White had a reasonable belief she had been drugged by an Abbey bartender and therefore she did not act with actual malice. The judge cited White’s sworn declaration, in which she said:

“From all of this evidence, I concluded that, like the other people who reported similar experiences, I had been roofied during my visit to the Abbey,” White stated. “I attributed this act to a bartender, but now that I have reviewed the video provided to me by the Abbey, I can see that neither the bartender nor anyone else tampered with my drink after it was poured.”

White’s call to #BoycottTheAbbey resulted in a substantial business loss, according to The Abbey. This includes cancellations and a drop in customers with an estimated loss of $1 million. Reeder urged the judge to allow a jury to decide whether the bar was defamed.

GREAT NEWS!! I very seriously doubt they lost any business. Who are they tryin to fool?? BooHooHoo, hard to feel bad for you Culo