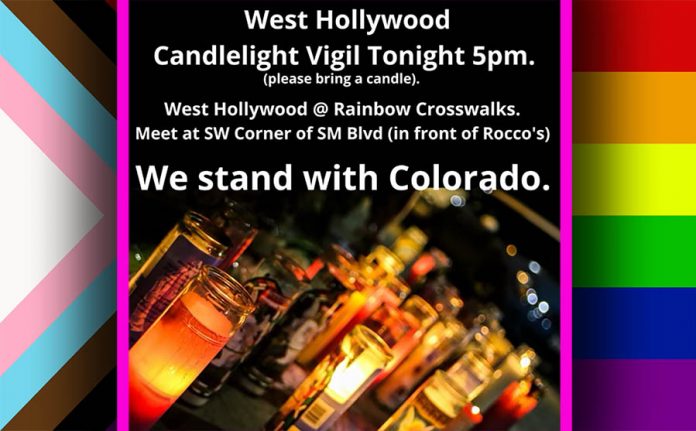 City of West Hollywood officials like WeHo Mayor Lauren Meister and Mayor Pro Tem Sepi Shine are getting the word out about a candlelight vigil happening this evening for the victims of the Colorado shooting that took place at Club Q nightclub on Saturday night. The vigil is starting at the West Hollywood Rainbow Crosswalk at the southwest corner of Santa Monica Boulevard and San Vicente Boulevard (In front of Rocco’s WeHo at 8900 Santa Monica Blvd.), at 5pm. Supporters are encouraged to bring candles.

According to reports, an attacker opened fire in Club Q the gay nightclub in Colorado Springs late Saturday night, killing five people and wounding at least 25. The incident occurred at Club Q a nightclub that caters to the LGBTQ+ community. The suspect was allegedly subdued by patrons, and Colorado Springs police said he was taken into custody and hospitalized for treatment of sustained injuries.

In a statement on its Facebook page, Club Q said it was it is “devastated by the senseless attack on our community. Our [prayers] and thoughts are with all the victims and their families and friends. We thank the quick reactions of heroic customers that subdued the gunman and ended this hate attack.”

Law enforcement officials said Aldrich’s “interactions with law enforcement” are part of the broader investigation, and they would not say if he’d previously been contacted by police. A man with the same name and matching age was arrested in June 2021 for threatening his mother with “a homemade bomb, multiple weapons, and ammunition,” according to media reports at the time. That man was arrested after a brief standoff.

The New York Times describes the series of events as follows: