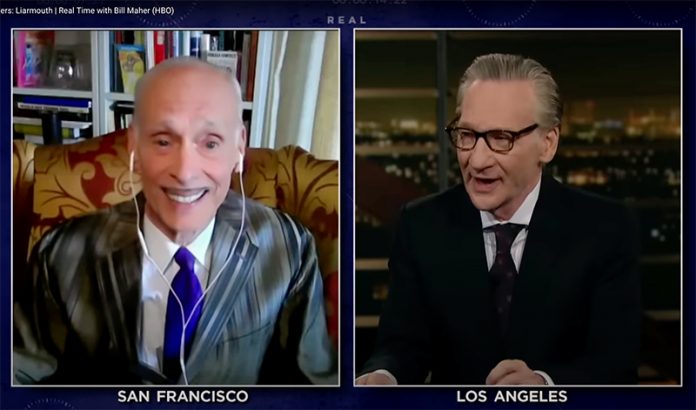 Filmmaker, writer, actor, and writer, John Waters was a guest on an episode of Real Time with Bill Mayer last week to discuss his latest novel Liearmouth, and his upcoming induction on the Walk of Fame. Maher asked Waters what it would be like if the both walked down Santa Monica Boulevard in what he referred to as “Boystown” in West Hollywood.

“It depends on which block,” responded Waters. “It used to on Santa Monica Boulevard, that they had different blocks. Out front of Oki Dog was the killer hustlers. Then you went another block, it was straight hustlers. Then bisexual, then gay, then drag, and then trans. “So you know, it’s hard, because there’s a lot of red lights on Santa Monica. It was nice to watch.”

The Hollywood Walk of Fame announced this year’s crop of recipients spanning all facets of media, honoring those whose time for recognition has come. Chair of the Chamber’s Walk of Fame selection committee, Ellen K, stated directors Jon Favreau and John Waters, as well as actress Mindy Kaling, Uma Thurman, and Paul Walker will all receive stars this year. Others set to have star ceremonies include Vince Vaughn, Martin Lawrence, and Bill Pullman. Walker won’t be the only star to receive a posthumous Star, as “Imitation of Life” actress Juanita Moore will also receive one after a lengthy campaign by her nephew.

“The panel thoughtfully selected these talented individuals, and we can’t wait to celebrate them as they become part of Hollywood’s history with the unveiling of their star on the world’s most famous walkway,” said K in a statement.

The Hollywood Walk of Fame is a historic landmark which consists of more than 2,700 five-pointed terrazzo and brass stars embedded in the sidewalks along 15 blocks of Hollywood Boulevard and three blocks of Vine Street in Hollywood, California. The stars are permanent public monuments to achievement in the entertainment industry, bearing the names of a mix of actors, directors, producers, musicians, theatrical/musical groups, fictional characters, and others.

The Walk of Fame is administered by the Hollywood Chamber of Commerce who hold the trademark rights and maintained by the self-financing Hollywood Historic Trust. It is a popular tourist attraction, with an estimated 10 million annual visitors in 2010.