John D’Amico is Being Roasted in Support of Zekiah N. Wright for City Council 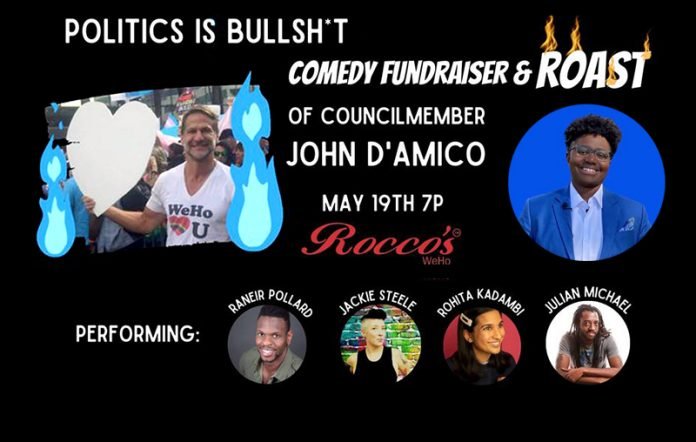 Attorney Zekiah N. Wright officially launch their historic campaign to become the first Black and first non-binary member of the West Hollywood City Council with a campaign kick-off event at Gym Bar in West Hollywood on Tuesday, May 10th. An employment and labor law litigator, Wright has served on the West Hollywood Lesbian and Gay Advisory Board since 2019 and has already earned a bevy of major endorsements, including West Hollywood Mayor Pro Tem Sepi Shyne, SEIU United Health Workers, and over 20 community leaders, businesses, and elected officials.

A Florida native, Wright worked for the US Attorney’s Office in Washington D.C. before moving to West Hollywood to start their own law firm as a solution to the high numbers of LGBTQ+, Black, and Latinx employees and business owners who do not have representation by LGBTQ+ and Black attorneys. Zekiah’s campaign will focus on public safety, homelessness, affordable housing, renters’ rights, quality of life improvements, and supporting small businesses as the city recovers from the Coronavirus pandemic.

“I’m running for West Hollywood City Council because our city needs a community leader that will build coalitions, be accountable to the people they represent, and move us forward with common-sense policies. I am that leader” said Wright. “I believe in building on the great work that has already been done in our city and thinking outside the box to address the dire issues facing our city. It will take all of us working together, but I believe we can usher in a brighter future for West Hollywood.”

With a Shyne endorsement – hell.no.