It was a festive, but low key reorganization and installation ceremony this past Monday, when John D’Amico was officially sworn-in as Mayor of West Hollywood and Lindsey Horvath was sworn-in as Mayor Pro Tempore.

Attendees were greeted to a colorful Council Chambers/Public Meeting Room with t-shirts that read “Mayor of West Hollywood” covering the seats in the order of the rainbow colors. The shirts were for the public to take home as souvenirs. It was D’Amico’s way of asking the community to share the title of Mayor with him.

Mayor Pro-Tempore Harvath thanked the community for voting for her and her family for their support during her speech. She also thanked City Staff, appointed officials and her colleagues for the work that they do.

“Like family, we may not always agree, and that’s important. Our community counts on us to have a diversity of opinions and to serve the many diverse needs of our city. No one of us could do that alone. I look forward to continuing our work together as a city council. Most importantly tonight I want to congratulate Mayor John D’Amico on his much deserved position of leadership. Not only was he the person to win the endorsement of all of his colleagues in this recent election, but he has certainly grown in his leadership in service and his leadership for the city…” 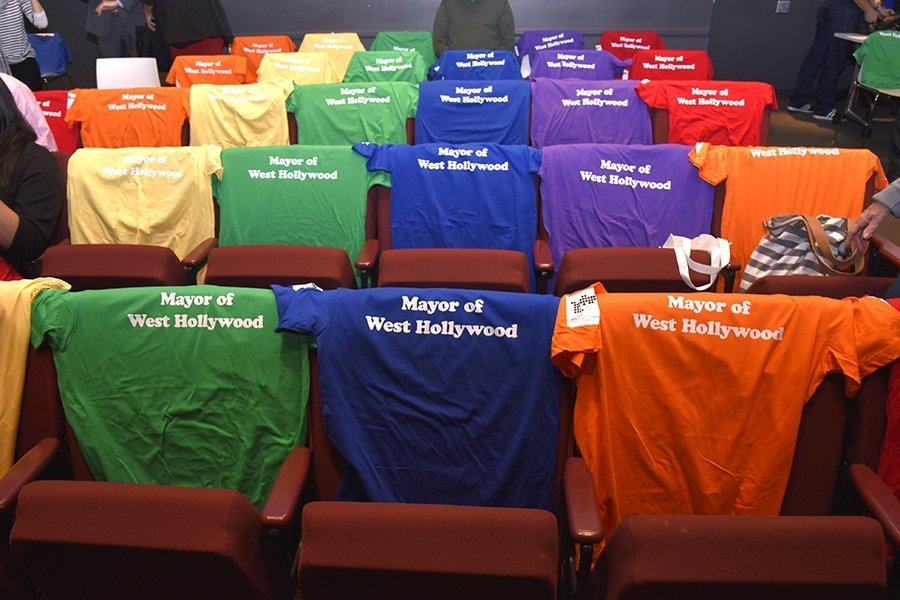 D’Amico thanked City staff, his colleagues and his husband Keith Rand. “First and foremost, I am here to do the city’s work,” He said in his speech. “I am honored to be doing it. I think it’s important work. It’s valuable and critical to set the bar high and keep it there. Cities are never finished, and ours is no exception. We will continue to expand and contract the way all cities do. More of this and less of that and some of the other.”

He listed his priorities for the year, which include determining what the correct level of social services funding should be to be sure that the city is keeping people in their homes and healthy and eating; help people to age in place, continue to reduce HIV infections, develop smart strategies for healthy living not add one more person to the county’s homeless population. We need to right-size the social services budget, and I look forward to leading on that front.

He vowed to strategize on how building and safety policies around seismic retrofit and sustainable building can be maximized to increase and maintain the supply of safe, resilient, rent controlled housing that will last for another generation.

He said he wanted to work with his colleagues and the sheriffs and social services agencies and the community to stop drug overdoses in our community. He wants to work to create programs and policies that promote wellness and safety in the face of this gathering storm. “Too many people are caught in a cycle of addiction and destruction,” he said. “As a community we need to lean into solutions that reduce harm and increase the sense of belonging.”

Lastly, he pointed out that his swear-in ceremony was muted to allow the savings from the night’s event to be put into programs that help young people thrive. Investing in the health and wellness of young people, especially young black and latino men reaffirms that their lives are important, that their contributions matter more than ever, and that their quality of life is something to be prioritized.

“There’s a lot to do. And there are a lot of us, more than 150 in this room and thousands more out in the city. There are almost as many mayors in this room as there are Democratic candidates for President. We’re all up to the task. We might make some mistakes along the way, but as you all have shown me, focusing on making the world a better place is what mayors do. Thank you very much.” 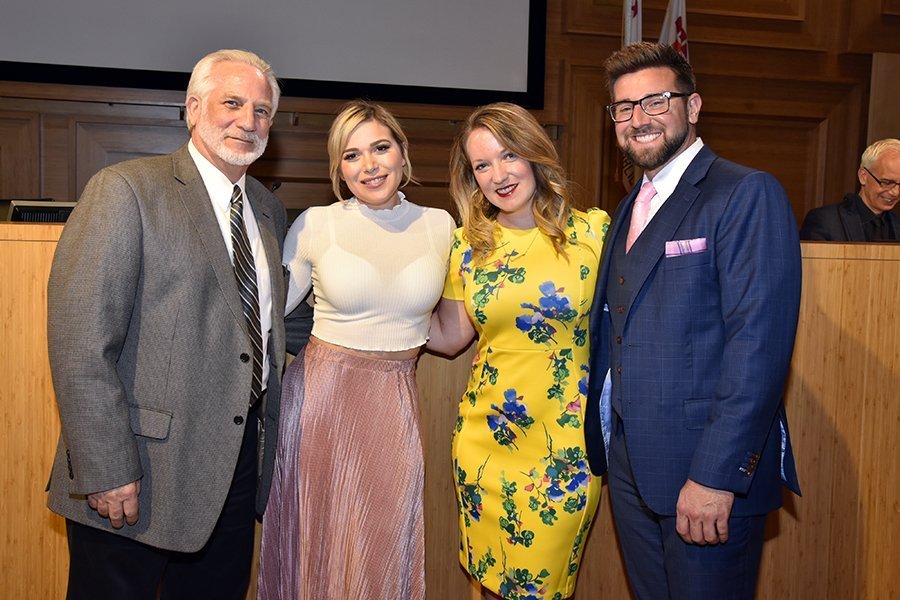 There was a short recess after the swearing-in to allow attendees to have some cake before the night proceeded with the regular City Council Meeting.

To listen to their full speeches, visit https://www.weho.org/city-government/wehotv