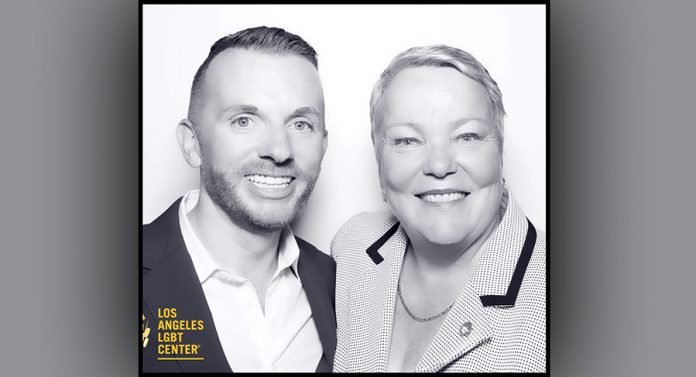 The Los Angeles LGBT Center’s Board of Directors announced Joe Hollendoner, CEO of San Francisco AIDS Foundation, will become the Center’s next leader. Hollendoner will assume the role of executive director on July 6 and work with Center CEO Lorri L. Jean prior to succeeding her as CEO upon Jean’s retirement in July 2022.

“It is an honor of a lifetime to be selected to lead the Los Angeles LGBT Center following such an iconic leader as Lorri Jean. I look forward to working with the Center’s board, staff, and partners to ensure that the Center not only continues to be a trusted provider of care to the communities it currently serves but that we deepen our work to address the racial disparities and systemic racism that prohibits all members of the LGBTQ+ community from thriving,” said Hollendoner via a press release. “I also remain committed to maintaining and expanding the Center’s role as a national and global LGBTQ+ movement leader.”

“The Center’s Board of Directors is thrilled that Joe will soon be joining us on his way to becoming the organization’s new CEO,” said Susan Feniger, co-chair of the Center’s Board of Directors. “His commitment to the LGBTQ community, experience as an organizational leader, proven track record on and passion for racial and economic justice, and his vision for the future is exactly what the Center wants and needs.”

Hollendoner has led San Francisco AIDS Foundation (SFAF) since 2016. During his tenure, he spearheaded the adoption of a new five-year strategic plan in 2019 that prioritized the expansion of health and social services and established racial justice as a fundamental principle to guide the organization’s growth. During his nearly five years at SFAF, he has grown revenue by 84 percent and significantly increased corporate and private donations to support the organization’s life-saving services.

In their own press release, SFAF congratulate Joe Hollendoner, on his appointment as executive director of the Los Angeles LGBT Center.

“While we are saddened to see Joe leave San Francisco AIDS Foundation and the Bay Area, I can think of no better person to lead the Los Angeles LGBT Center into its bright future,” said Maureen Watson, board chair of San Francisco AIDS Foundation. “The Center and SFAF have a special partnership and I know Joe will work to ensure it continues to flourish. I am also confident that SFAF will continue the trajectory that Joe has put it on through his work developing our strategic plan and building a strong board and leadership team.”

Prior to taking the leadership role at SFAF, Hollendoner was chief of staff and first deputy commissioner at the Chicago Department of Public Health, the nation’s third largest health department. From 2001 to 2012, he served in several roles at Howard Brown Health, the Midwest’s largest LGBTQ health organization, and ultimately became its vice president and chief program officer. Among his many achievements while he was at Howard Brown, Hollendoner was one of the founders of Broadway Youth Center (BYC), a comprehensive health and social services center for LGBTQ+ youth experiencing homelessness. In recognition for this leadership in the creation of the BYC, he was named a Community Health Leader by Robert Wood Johnson Foundation in 2010.

Hollendoner has been part of the LGBTQ movement since coming out as gay at the age of 16. With nearly 25 years of movement leadership, he has proven himself to be a trusted collaborator and ally to all members of the LGBTQ community.

“We are living in uncertain and unprecedented times,” said Wilson. “From our federal government to our local LGBTQI Institutions, change is everywhere we turn. At times like this leadership matters. The Los Angeles LGBT Center is a vitally important organization for our community, and it is also large and very complex. Joe is one of the few people in the country with the skills, experience, and passion required to lead this organization into the future. Joe is a friend and colleague who I trust. I am confident, with our support, he will be the kind of leader the Center and we need at a time like this.”

During the one-year transition period, Hollendoner will work alongside Jean, who is one of the longest-tenured leaders in the LGBTQ movement.

“I am delighted that the board selected Joe,” said Jean. “He has been an extraordinary leader at the San Francisco AIDS Foundation, with whom we partner on the AIDS/LifeCycle. I’ve seen him in action and watched him grow the Foundation and infuse his progressive values throughout its work. I respect him, I like him, and there is zero doubt in my mind that Joe will become a successful and powerful leader of the Los Angeles LGBT Center.”

Jean initially served as the Center’s executive director from 1993 to 1999. She returned as CEO in 2003. She announced last September that she would be stepping down in July 2022. Hollendoner will transition to the CEO role at that time.

Hollendoner has bachelor’s and master’s degrees in social work from the University of Illinois at Chicago.