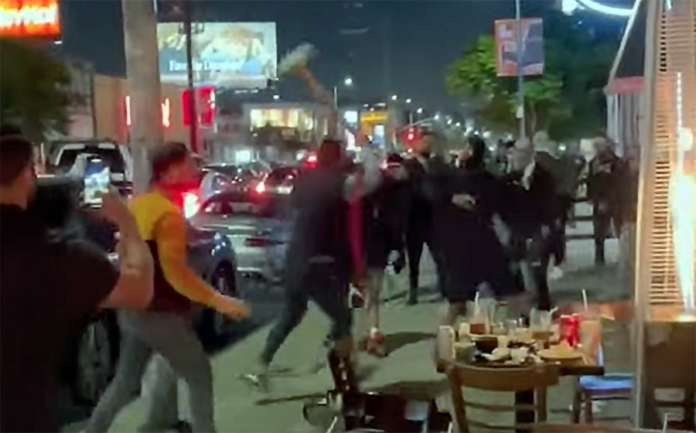 Police are investigating a possible hate crime after diners allege they were attacked by pro-Palestinian demonstrators last night at Sushi Fumi, located in the 300 block of North La Cienega, just steps away from the West Hollywood border. The fight broke out in front of the restaurant around 10 p.m. last night, Tuesday, May 18, 2021 just north of the Beverly Center.

“A group of Palestinians, about thirty of them, jumped out of a car and asked who was Jewish,” said witness Jessi Y SidRanski via a video he posted at a West Hollywood Facebook group. “Two guys said they were and they proceeded to beat them up. A couple of people stepped in. Even a Christian Arab jumped in to help…they’re apparently going around the city asking who’s Jewish and beating them up. This is America Guys. Things are not looking good.” 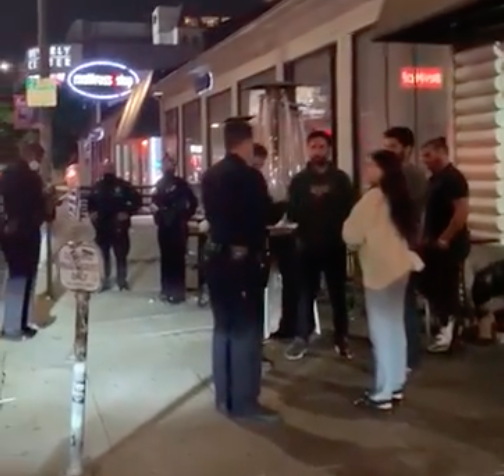 According to news reports and videos posted on social media, a group of men yelling pro-Palestinian chants and waving Palestinian flags from their cars targeted the Jewish individuals at the sushi restaurant. They yelled anti-Semitic slurs at diners. One of the diners yelled back at the group of men and a violent fight broke out.

Video from the incident shows the group approach the diners as a man sitting at one of the tables picks up a rope pole to ward off the individuals. That man was then seen dragged toward a nearby car, pinned by the group, and punched.

One of the diners, who is not Jewish, told CBSLA that men in a caravan began throwing bottles at him and the group he was dining with. The man said he was physically attacked when he tried to defend the group. He said the men used anti-Jewish profanity. He said he was pepper sprayed during the attack and had to go to the hospital.

The suspects were described as white men wearing all black. They fled south on La Cienega Boulevard in a vehicle described as a black Jeep. The Sushi Fumi did not sustain any damage. CBSLA reports that according to police there were no major injuries reported, and there were no immediate arrests.

There was another incident where security video recorded Monday night shows what appears to be an Orthodox Jewish man being chased by a caravan of people waving Palestinian flags near Rosewood and La Brea avenue. According to reports, the man escaped and was not hurt.

Liberal media is sensationalizing a street brawl as race incident since it fits their narrative of a racist country. Its time for the media to be checked and fined for such lies.

Very scary incident for all our Jewish residents, let’s hope for a thorough investigation and support all necessary safety measures.

Whether this was done by rogue pro palestinian protestors, pro Israeli agitators or some other unhinged faction deserves full consideration.

“A group of Palestinians, about thirty of them, jumped out of a car” Do you proofread? 30 of them in one car?????