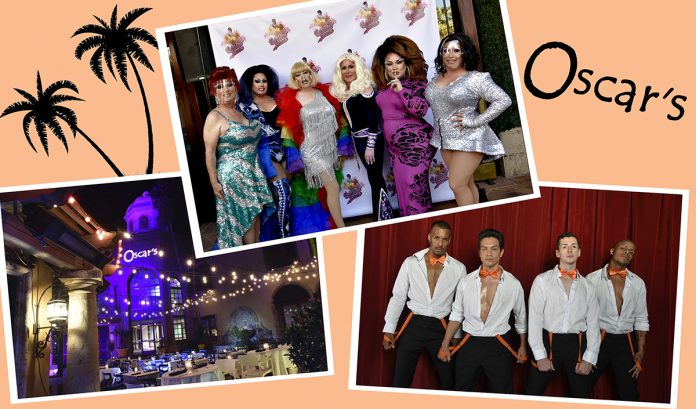 A visit to Palms Springs and you’ll find a lot of familiar WeHo faces. L.A. County folks are getting away to the desert as COVID restrictions decrease and L.A. traffic increases. A PS destination is Oscar’s Downtown Palm Springs​, a popular restaurant and bar offering a wide variety of live entertainment, from Mimosa Men to the Bitchiest Drag Brunch hosted by Anita Rose. A spacious open courtyard make the live shows COVID-safe. Special events include upcoming performances by familiar names like Jackie Beat, singer Tiffany and Melissa Manchester to name a few.

At the helm of Oscar’s Cabaret is owner Dan Gore, the man tasked with balancing running a restaurant, and cabaret showroom while keeping his employees and customers safe during COVID, despite the growing wave of vaccinations. “We want to keep people safe while giving people an escape,” he said. “We want to focus on entertainment and offer people an uplifting moment.”

In an interview with WEHO TIMES, Gore reflects on the challenges of the past year, his love for entertainment, and what he thinks of men stripping and drag queens lip-syncing with a side of pancakes. He also reflects on his first drag experience at La Cage aux Folles in West Hollywood.

Where are you from originally?
I’m from L.A.; all over the L.A. County; Orange County; Ventura County.

How long have you been in this type of business?
My first gay bar I went to was Peanuts at 17 in West Hollywood. There was also a bright pink building on La Cienega called La Cage aux Folles in the early 80s and 90s. I was 19, and that cabaret was my first experience with drag. I saw the show The Cosmetics. They were impersonating Madonna and Grace Jones and Tina Turner. The guy who did Grace Jones looked exactly like her, and so did the guy named Viva, who looked so much like Madonna. Because of my naïveté, I thought they were the real stars and later I learned they were drag queens. Moving on to a few years later, I started working at La Cage aux Folles as a George Michael impersonator. I traveled the world, but you’re only as popular as the character himself, so I got obsessed with drag queens. I started booking them. I started representing them. 21 years ago, I put on a drag show in a casino. I did shows from 2000 to 20014. I came to Palm Springs in 2014 and by 2017, I was able to take over the operations at Oscar’s.

What does get back to work entail?
We have a unique opportunity for entertainment at Oscar’s Cabaret. We have a huge outdoor space. We also have a second floor, so we’re able to do entertainment outside, so when restrictions were lifted, we were able to provide entertainment. That’s what we’ve been doing. We have a very popular drag brunch here on Sundays, so that’s what we immediately started doing with entertainment upstairs and audience downstairs.

What did you have to do to educate yourself on keeping your customers and employees safe?
Palm Springs is a very hands-on city. It gave businesses access and kept them enlightened about COVID protocols and safety. We are one of few restaurants, if not the only one, where our staff wears masks and shields. I got COVID back in December. I didn’t want my staff to get it. We deal with a lot of people coming and going. There are still people getting sick, so we try to be as safe as possible.

How do you come up with an idea like Bitchiest Drag Brunch?
I’ve been producing shows where the space and the lighting is controlled. It’s RuPaul’s Drag Race lighting, but bringing drag queens outside to the blaring sun, it’s something I never imagined. I never wanted to have breakfast and have a drag queen lip-syncing in front of me, but as many people know, this is a phenomenon across the world. You see that in every major city throughout the country. We just happen to be, if not the best, one of the best because of our layout. It’s safe and we have great girls, we have great staff, and we have a lot of fun.

What say you about Mimosa Men?
Mimosa Men was something that was trending for me. Again, I can’t imagine men stripping while eating an eggs Benedict, but every week has sold out, so people do want to see men in their speedos with their breakfast. It’s done in a tasteful way. They’re not go-go boys, they’re professional dancers. They have choreographed routines. I really wanted that with this production. The boys are really good. They know what they’re doing.

So, you want to continue doing what you were doing pre-COVID?
Yes, more so. We want to continue bringing entertainment to Palm Springs. We do live bands here at least once or twice a week. We want to offer people an uplifting moment. We also serve American cuisine, so they come here for entertainment, and they get great food. We serve breakfast and offer bottomless mimosas on the weekend. Then we do lunch and dinner on the weekdays. Our focus is a wide variety of entertainment, from drag brunch to men stripping to basically being the entertainment capital of Palm Springs. This is the place to be.