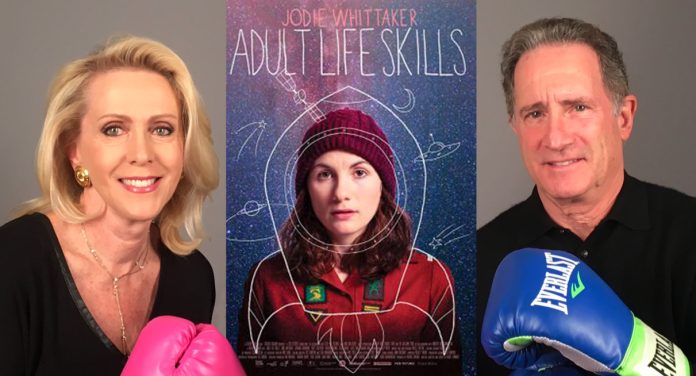 Jeanne and David of Kaplan vs Kaplan, are back with his and her movie reviews of the movie Adult Life Skills, starring Jodie Whittaker.

Jeanne: Jodie Whittaker, the new incarnation of “The Doctor” — and first female — in the British TV series “Doctor Who”, plays Anna, a soon-to-be 30-year-old who lives in her mum’s shed in the 2016 comedy ADULT LIFE SKILLS. It premiered at the Tribeca Film Festival in April of that year and won the Nora Ephron prize for best female director.

Anna is a mess — to put it mildly. She’s mourning the death of her twin brother, Billy (Edward Hogg), and is incapable of moving on with her life. She spends most of her time at night creating videos using her thumbs as her actors with her voice as theirs. During the day, she works at a camp for children, where an eight-year-old named Clint (Ozzy Myers), is dealing with the serious illness of his mother.

Adorable Clint is obsessed with American Westerns, outfitted in a cowboy hat, vest and holster. He doesn’t have much to say, but he has developed an attachment to Anna. And when she rebuffs his affection, Clint goes missing, causing an obvious crisis for all who know and love him — including Anna.

ADULT LIFE SKILLS is relatively slow in getting started. It’s not immediately clear — or we couldn’t understand because of the poor quality of our link — why Anna is taking cover in her mum, Marion’s (Lorraine Ashbourne), backyard abode. Marion and her mother, Jean (Eileen Davies), live in the main house and neither can understand why Anna chooses to inhabit the tiny shed, replete with spiders. Eventually we learn about Billy and his untimely passing — and then we begin to comprehend Anna’s craziness.

David had a very difficult time staying with ADULT LIFE SKILLS. It really wasn’t until three quarters of the way through that he perked up and began to appreciate first-time writer/director Rachel Tunnard’s efforts. Even I, who usually revel in this sort of film, had trouble loving ADULT LIFE SKILLS.

But, in the end, Whittaker’s and Myers’ performances won me over and made up for the uneven volume throughout — and the difficulty deciphering the thick English accents employed by Tunnard for her characters. I grew to love poor, dysfunctional Anna — all driven by Whittaker’s astute portrayal. And Myers is totally precious and brilliant as the bereft Clint — a child who doesn’t deserve his fate.

While I cannot recommend that you rush right out and see ADULT LIFE SKILLS at the theatre — though hopefully the sound is better — it is worth a look when you have the opportunity. Congratulations to Whittaker! Here’s hoping she’s a smash on “Doctor Who!”.

David: For most of ADULT LIFE SKILLS, twenty-nine-year-old Anna (Jodie Whittaker),who lives in a shed in her mother’s backyard, spends time arguing with her mum, Marion (Lorraine Ashbourne) about her lifestyle. Anna is grappling with the death of her twin brother, Billy (Edward Hogg), so to amuse herself she makes videos of her thumbs as actors, which are painted with faces, much like a Punch-and-Judy show.

An eight-year-old boy named Clint (Ozzy Myers) is drawn to Anna at the camp where she works. His mother is gravely ill, so he, too, is dealing with a life-and-death issue. Clint senses that Anna will understand what he’s going through, but when her frustrations with her life reach a boiling point, she explodes and takes it out on Clint.

ADULT LIFE SKILLS is slow and uneventful for most of its 96 minutes. I will say that Anna’s exceedingly mean comments to Clint, which caused him to disappear into the woods, were the film’s turning point when the story came alive. However, this dramatic scene lacked the impact it might have had with a better build-up. Although I felt some concern for Clint, there was no real tension. I also didn’t believe Anna’s interest in Brendan (Brett Goldstein), a local man with amorous intentions towards Anna.

Whittaker is a lovely actress who gives a very good performance. But, outside of young Myers, who isn’t given much to say, I found the other characters grating. And for a good portion of the film’s first half — which we streamed on a computer — I had to frequently ask Jeanne what the actors had said. The incomprehensible British accents could have used sub-titles.