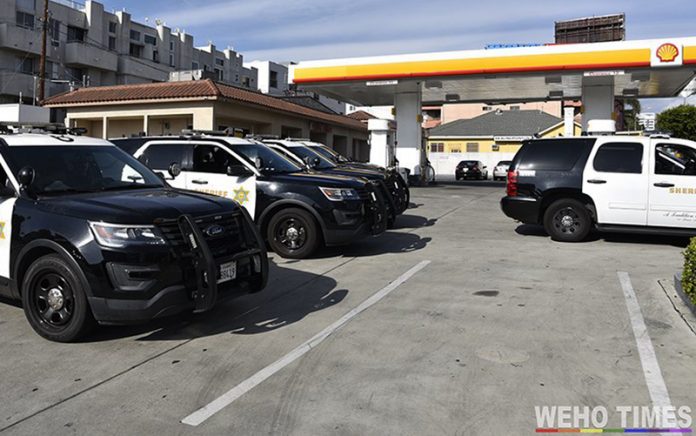 Agenda Item 5.A. brought forward by Mayor Pro-Tempore Sepi Shyne and council member Lindsey Horvath states that most common interaction people have with law enforcement is through traffic stops. According to the the City Staff report, police pull over more than 50,000 drivers on a typical day, more than 20 million motorists each year in the U.S. There have been multiple studies documenting the deep racial disparities that exist in law enforcement traffic stops and arrests. Police officers often have broad discretion to pull people over in “pretext stops”, which means they might stop a driver for a minor infraction in order to ask questions or investigate a more serious crime.

During public comment, WeHo resident Tod Hallman shared a story about being stopped by police after shopping at Westside Pavillion with his boyfriend at the time (a white male). “We were sitting at Pico and Robertson waiting to make a left to West Hollywood,” he told the council. “We were sitting at the intersection when I saw a LAPD cruiser and two officers looking at us. I quietly said to Mark, ‘They’re going to pull us over.’ When Mark made the lefthand turn, they immediately pulled us over. One officer proceeded to Mark’s side of the car with questions–driver’s license, registration–while the other officer came to my side of the car. I’ve been through this drill before, so I knew to keep my hands visible. The one officer that was on my side of the vehicle tried to engage me in idle conversation. Then he looked at the back of the vehicle. We had been shopping at Nordstrom and at that time, when you shopped at Nordstrom, all of your items were wrapped in tissue and put in a Nordstrom bag and tied with a bow. He looked in the back and then he looked at me and said, ‘Are any of those items stolen?’ They eventually let us go. As we drove home, I was mortified, humiliated and embarrassed. This wasn’t the first time. I hope you consider this story when you vote on this agenda item this evening.”

Public speaker Charlie Jasper was against the item saying it was a grave mistake. He brought up a concept called broken windows policing in which police go after small crimes and end up stopping bigger crimes from happening. He said stops for petty crimes led to hardcore criminals like rapists. “When you make this low level minor traffic stops for broken tail lights, for expired tags, there is a possibility that you do interrupt the criminal planning process,” he said.

Before having a discussion on the item, council member John D’Amico made a motion to move the item and have the city attorney work closely with the Public Safety Devision to draft a set of policies that could either be implemented immediately or over time depending on what makes sense with the contract the City has with the Los Angeles County Sheriff’s Department and then bring it to the Public Safety Commission to engage the public in a further discussion before presenting the council with an item to vote on.

Council member John Erickson reminded the public that this was direction and not the actual item and that there will be another public process to make sure people are heard.

Mayor Meister pointed out that the council gave direction go the Public Safety Division to work with the Center for Police Equities to get a report with numbers and recommendations, which the council does not currently have. “I would like to see those numbers before making a decision on that,” she said. “I do appreciate the public’s comments. I do appreciate that there could be some scary things that can go on with stops. This is the first time I’m learning that it’s just our traffic cops that make traffic stops and not all of our deputies. I wonder if there would be anything that we could do with them without having to do all this first.”

The Staff report on the item states that the largest-ever study of alleged racial profiling during traffic stops was conducted by Stanford researchers. The researchers analyzed 95 million traffic stop records, filed by officers with 21 state patrol agencies and 35 municipal police forces from 2011 to 2018. The study found that “police stops and search decisions suffer from persistent racial bias.” In general, relative to their share of the residential population, the study found that Black drivers were, on average, stopped more often than white drivers and when drivers were pulled over, officers searched the cars of Black and Hispanic drivers more often than white drivers.

California’s Racial and Identity Profiling Act (RIPA) was passed in 2015 to eliminate racial and identity profiling and improve diversity and racial identity sensitivity in law enforcement. RIPA requires law enforcement agencies to submit information on stops made by officers, including their perceptions regarding the identities of the persons stopped, actions taken during the stops, and the stops’ outcomes. The 2022 RIPA Board Report includes analysis of the millions of police and pedestrian stops conducted in 2020 by 18 law enforcement agencies, including the 15 largest agencies in California.

In light of these ongoing disparities, history of oppression and institutional racism, cities and communities across the country have begun to explore alternative models to traffic safety that do not rely on armed law enforcement. Philadelphia became the first major city in the United States to ban low level traffic stops. The legislation adopted in Philadelphia bans stops for:
– Driving with a single broken brake light
– Driving with a single headlight
– Having a registration plate that’s not clearly displayed, fastened, or visible
– Driving without an inspection or emissions sticker
– Bumper issues
– Minor obstructions (like something hanging from a rearview mirror)
– Driving without vehicle registration within 60 days of the observed infraction

According to the new law, such infractions can still result in a ticket that is either left on the driver’s windshield or mailed.

Other state and local governments have introduced similar legislation to reduce police interaction. The state of Virginia enacted a law in March which includes a ban on stopping and searching drivers for reasons including defective taillights, loud exhaust, or the smell of marijuana. The city of Minneapolis, near where Philando Castile was stopped and killed after being pulled over for a missing taillight, has also implemented a policy change to cut back on traffic stops for minor infractions. The intention behind these policy changes is to eliminate a category of stops that tend to have particularly large racial disparities while not compromising public safety.

After the results of a report by the Center for Policing Equity found racial disparities in local law enforcement data, the Berkeley City Council gave direction to focus traffic stops on safety and to ban stopping drivers for offenses that aren’t safety related. The Center for Policing Equity’s report found that Black people are 6.5 times more likely than white people to be stopped by the Berkeley Police Department while driving and 4.5 times more likely to be stopped on foot. Black people, who comprise only 8% of the population of the City of Berkeley, made up 46% of individuals who were subjected to use of force by Berkeley Police Department. The Berkeley City Council gave direction to focus traffic stops on safety (such as excessive speeding, running a stop sign or stop light, unsafe movement, or driving while intoxicated) and to eliminate stops for low level offenses (such as equipment violations, not wearing a seat belt, improper use of high beams, violating a regulation, etc.). Berkeley’s longer-term goal is to remove law enforcement from traffic enforcement all together. Oakland has also reduced stops for low level, non-public safety related offenses, resulting in a reduction in the number of Black individuals being stopped and a reduced stop-disparity rate, with no effect on crime rates.

The City Attorney’s office will review the low level traffic stops that have been banned in Philadelphia and Berkeley as well as other equipment violations and non-moving violations in the State of California to determine the specific list of options for consideration in West Hollywood. The proposed change is meant to focus on non-moving violations that do not impact public safety. Any new policy or ordinance would not impact the Sheriff’s Department’s ability to enforce moving violations and other traffic violations that are related to public safety, such as speeding, running red lights or stop signs, or driving under the influence.

In 1996, the City Council passed a resolution declaring that the investigation and arrest of individuals involved with the medical use of marijuana shall be a low priority for the City of West Hollywood. In March 2021, the City Council adopted a resolution declaring that the City and Sheriff’s Department will not target specific sex work related offenses. Declaring sex work related offenses, a low priority in the City aids in minimizing some of the physical, and health risks sex workers are exposed to on a daily basis due to their occupation. It also allows limited Sheriff services to be directed towards more violent and dangerous issues and crimes.

The Public Safety Commission will explore the item further, engage the public in its findings and present the council with their final analysis.

Here’s an analysis…what a stupid idea. Laws that are not enforced makes our system look like a joke. We have laws for a reason. This council is a joke.