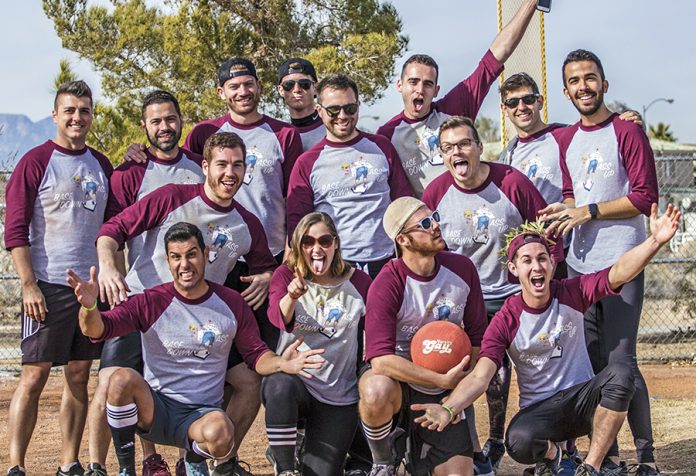 Do you poop out at parties? Are you feeling tired, run down, and listless from the redundancy of the gay bar culture? Are you unpopular? Or too damn popular for your own good and want more than what hooker apps like Grindr have to offer? Varsity Gay League (VGL), the sports recreational league for active LGBT people and their hetero friends could be the cure from the common same-old, same-old.

Back in 2007, Los Angeles resident and VGL founder Will Hackner was just a typical guy looking for an alternative way to make new friends and have fun outside of the bars. He didn’t ask for much. He just wanted more than what gay weekends in L.A. had to offer, which was mainly about nightlife, going out to a bar or club, getting drunk, and trying to get laid the old fashioned way before Grindr came along and changed the hook-up game.

“10 years ago, I was working in Hollywood as a film and TV development executive and producer,” he told WEHO TIMES. “My priorities and focal points were not anything related to small business or sports in any way.”

Hackner always loved playing games and having outdoor fun. “I noticed the lack of hiking groups or any kind of gay sports,” he said. “If they existed, I didn’t know anything about them, because they didn’t advertise or market themselves. Southern California is beautiful and we weren’t doing anything outdoors that was entertaining or fun. It was very isolating in a sense.”

Hackner addressed the isolation one can feel in a crowded bar by gathering a group of his friends and going outside for a simple game of Catch the Flag. That’s when he recognized the need for something the LGBT community wasn’t offering at the time. So in 2007 VGL was conceived. The sports league celebrated its 10-year anniversary earlier this summer. What started out as a game of Catch the Flag with 50 people has grown tremendously over the past 10 years. VGL is now the largest LGBT Sports League in California, serving 1000s of players statewide. The league is widely known for offering year-round, outside-the-box activities and sporting events for the LGBT community and its allies, regardless of sexual orientation, gender identity and expression, or sports experience. VGL now offers leagues in a long list of sporting events. Among them, kickball, tennis, bowling, dodgeball, soccer, flag football, beach volleyball, trampoline dodgeball and so much more.

Hackner reached a milestone in winter of 2010, when VGL formed its first kickball team. “I hadn’t played kickball since I was in the second grade. I was a small scrawny kid, but I really loved playing kickball, so I wanted to play as an adult. We did a brief tournament. 50 to 60 people came. Then flash-forward to about five-six months later, we had our first official league. It was 60 to 70 players. I had no idea what I was doing. I didn’t know about insurance. We certainly didn’t have park permits. I was gathering dust in the wind, but it all went fairly well.”

The following season, they had ten teams. And by summer of 2012, they had 16 teams with 150 people. “At that point, I realized there was something that was blossoming here in the organizational structure. People were getting invested and excited.”

That year, Hackner had been laid off from a corporate job for the second time in two years. “I thought it was time to invest in myself, make a change and throw caution to the wind. So I did. I decided to become a business that year and never looked back.” Hackner used his skills as a photographer to feature his players on MySpace and Facebook early on. He mostly shot the hottest boys from his teams to attract attention. He soon realized that if he wanted to invite a diverse crowd, he had to highlight the uniqueness of all his team members.

VGL grew mostly by word of mouth. At the start, they had six kickball teams. Now they have over 90 teams across leagues and organizations. Leagues branched out from California and now include Oregon, Texas, Colorado, Massachusetts and Florida. “We work with over 8,000 people,” he said. “It just goes to show that in five years’ time, you can go from 100 to 8,000 if you have a lot of passion. We are driven by the hope that what we are doing is exciting and working to change the perspective of the LGBT world and how we interact with one another. There is no bias in this organization. It is predicated on having fun and playing and interacting with one another in a positive way.”

“I’ve been in Gay Varsity for two years,” said fellow VGL leaguer Michael Kaufman. “When I moved back to L.A., I really wanted to try something new. I’d never played a sport before, so I really challenged myself to get into it. I discovered a competitive side to me I didn’t know existed, so I stayed. I have made a lot of friends, it’s a great way to exercise, meet people, get laid, win some games and get some trophies… and get laid.”

For those who don’t believe gay guys are interested in sports, one needs not look further than the crowds that gather outside of Gym Bar in West Hollywood on any weekend afternoon. The patio at Gym Bar is often filled with hot athletic gay guys in their VGL uniforms who often meet there post-game for a little bar culture after kicking some balls. The sports bar even has a VGL trophy case on display inside the bar.

“I joined a dodgeball team 10 years ago and I only knew two people,” Hackner added. “I did it because I thought it would be fun. We walked out into the court and we sucked. I was petrified. I really sucked. And flash forward 10 years later, not only do I own my own sports organization, but I’m a 15-time dodgeball champion. It goes to show that with perseverance, tenacity and confidence, you can do wonders.” Wonders await at Varsity Gay League. To register to join a team, or to learn how to create a team of your own, visit varsitygayleague.com

0 0 votes
Article Rating
Share
Facebook
Twitter
Email
Copy URL
Previous article
ALL OUT POLITICS: My Name is the GOP, and I’m a No-aholic
Next article
Out & About with Mike Pingel: Musical Mondays at RAGE