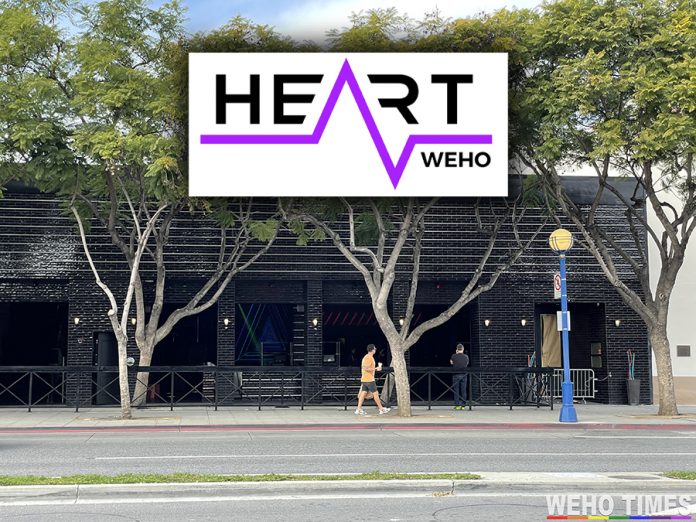 It appears singer/restauranteur Lance Bass, and his business partners at Rocco’s WeHo are bringing a new gay dance club called Heart WeHo to the umm… “heart” of West Hollywood, at the former Rage nightclub space located at 8911 Santa Monica Boulevard. The name of the WeHo dance club has been a secret since news broke that Bass and Co. signed a lease to take over the shuttered gay space owned by Monte Overstreet, back in March of last year. However, the dots connect club Heart WeHo as the new next big thing that’s coming to WeHo’s LGBT Rainbow District in 2022, and we’re all here for it. 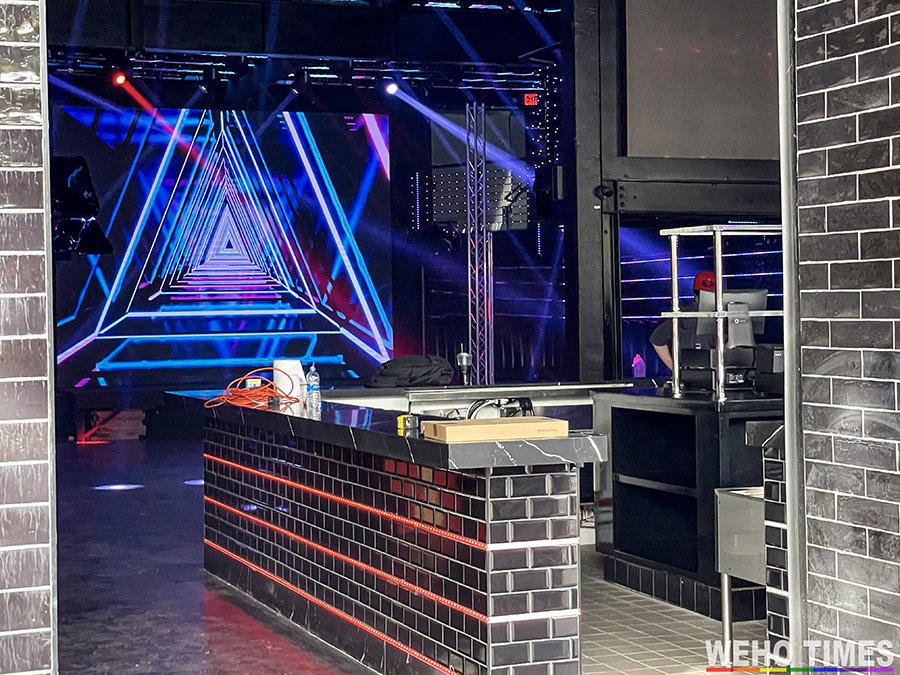 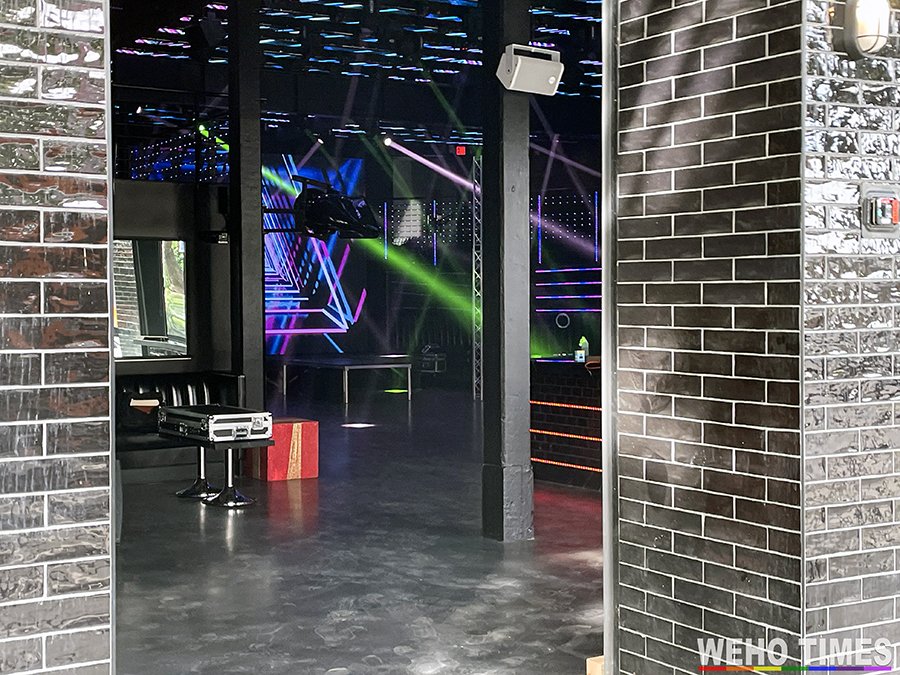 And how did we come to the Heart WeHo conclusion? It was tricky.

It turns out the first clue was given way back in the beginning on March 21, 2021, when Bass himself posted on his social media that “the biggest dance club was coming to WeHo.” He shared a link to the website wehomegaclub.com, where he introduced the WeHo community to a graphic of a neon multi-colored heart that was also shared by Rocco’s club promoter Paul Nichols, light and sound wizard Jon Rube, as well as others connected to Rocco’s—but we’re getting ahead of ourselves. 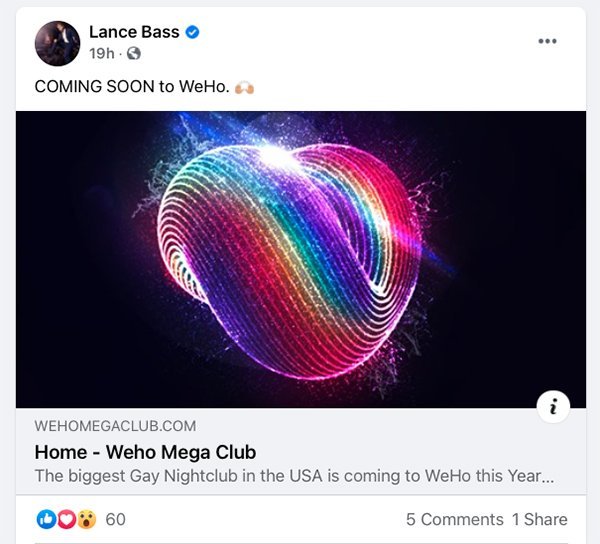 We thought the name was going to be WeHo Mega Club, because that’s what made the most sense. There was the website and artwork already at play, but we were told that wasn’t it. It turns out the website was just a promotional tool to keep queens gagging (and guessing).

We looked for other clues tied to business entities and liquor license transfers, but we did not come up with a solid name for the new dance club. The Rage liquor license is still active, but a transfer is pending to something called Zo. at 18711 Ventura Boulevard, in Tarzana.

We came up with the 8280 Sunset Lounge LLC, which is operating as 8911 SMB according to Fictitious Business Name Statement File number 2021124731. The 8280 Sunset Lounge could’ve been the new Rage, but why name a place The Sunset Lounge when Sunset Boulevard is up the street? The new name could’ve been 8911 SMB (we were certain that was the name for the longest), or just Club 8911, since there is no name placement on the entire building, except for the the numbers 8-9-1-1. There is also an actual website 8911smb.com, but that could be another decoy website to throw people off.

However, a big giveaway that Heart WeHo is coming to Rage, is simply the WiFi name that pops up when you stand in front 8911 Santa Monica Boulevard. Yup. You guessed it: Heart. 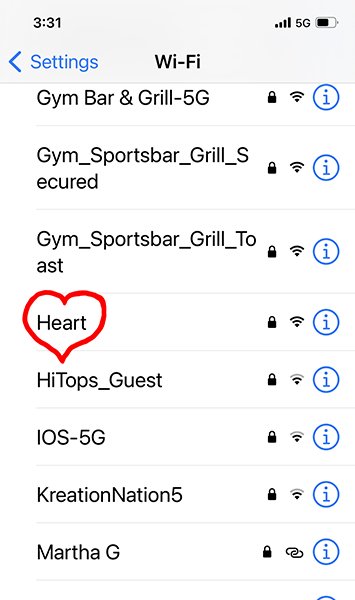 We took the word heart and searched further. We found the newly created HeartofWeho Instagram account, which reveals the new logo that seems to be part of the new mega club coming to the northwest corner of Santa Monica and San Vicente Boulevards. Then there is the Heart of WeHo TikTok page that’s clearly connected to Rocco’s WeHo (not to mention, Lance Bass has referred to Rocco’s as the heart of WeHo on several occasions). 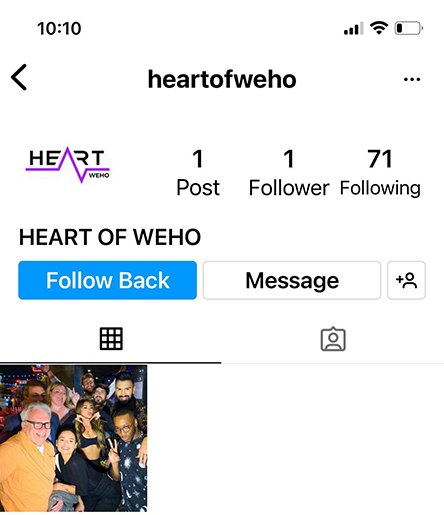 However, the biggest giveaway was Lance Bass himself. We searched for the word Heart in the United States Patent and Trademark Office. In a filing dated August 24, 2021, the word mark “Heart” was initiated under IC 041. US 100 101 107. G & S: Dance club services; Entertainment services, namely, conducting parties; Night club services. One of the applicants is, you guessed it, James Bass, aka James Lance Bass. 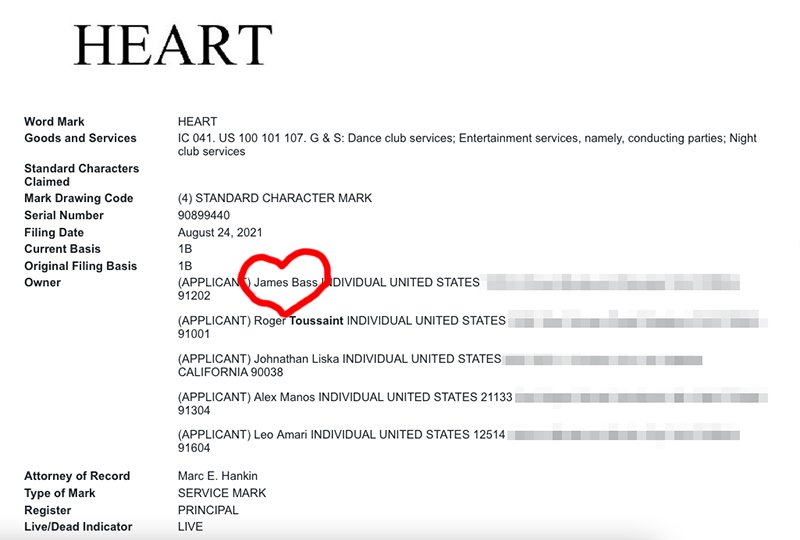 There was some sort of employee meeting at club Heart WeHo earlier this week, which gave us a street view of what is coming soon. The tile work, and light show displays promise to be a real spectacle. They turned the orange building into a shiny black aesthetic, giving it a very New York feel with sliding garage doors that allow plenty of sunlight from the patio area. 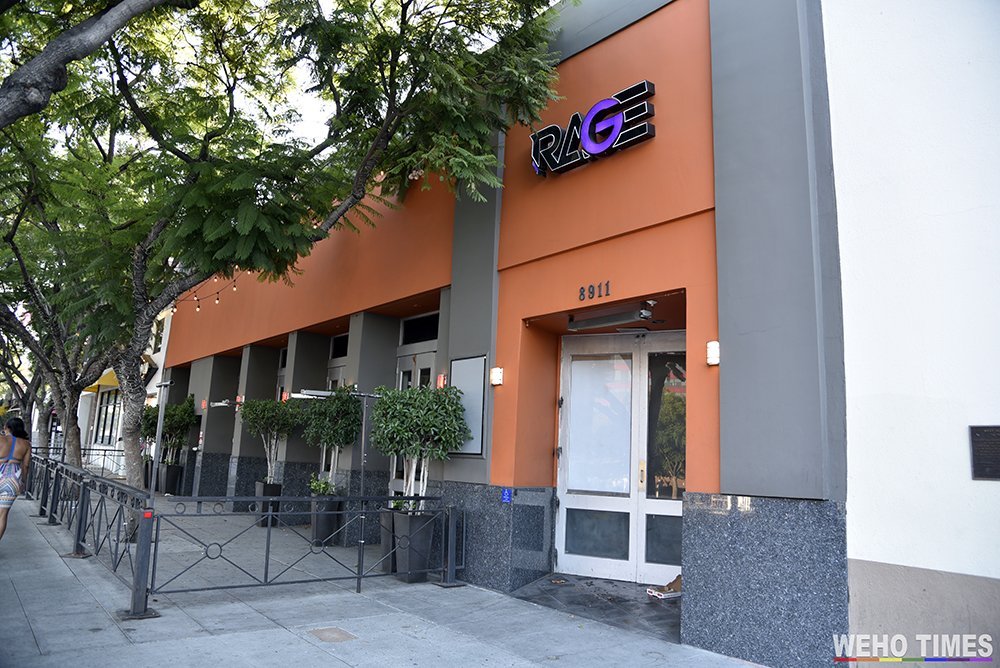 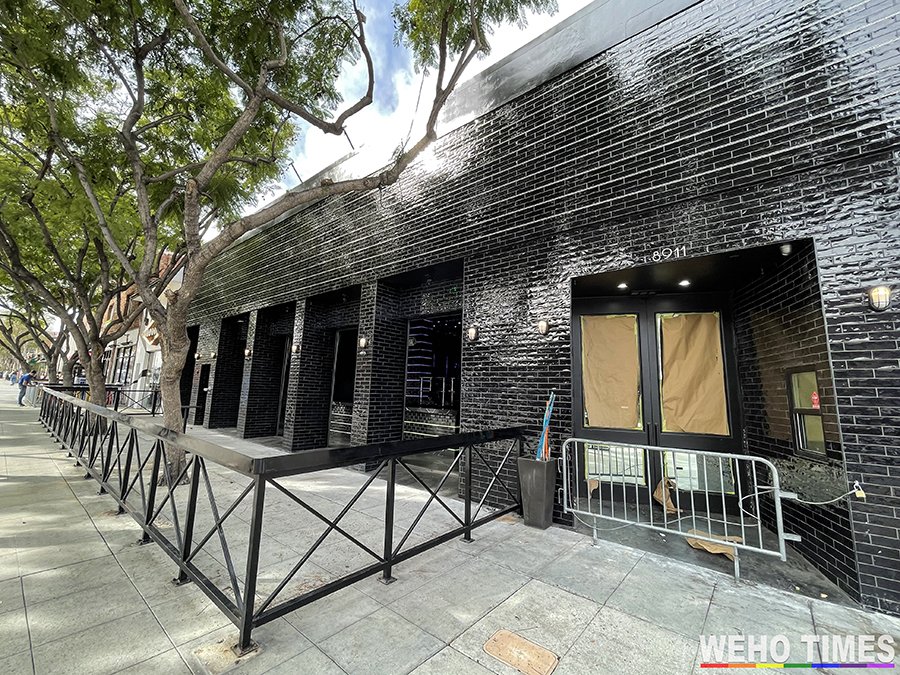 An eTRAKit permit search in the City of West Hollywood website suggests the new club Heart has kept the integrity of the former historical Rage Nightclub space. There were facade renovations, new tile finishes, the replacement of exterior doors with sliding garage doors and a new ticket window was also built.

According to rumors, club Heart is opening in late January, early February, but that has not yet been confirmed. A source tells us he recently interviewed for a bartending position at the up-and-coming dance club. And before you get mad at us for ruining the surprise, there is an event called Happily Ever After by Team Cyclepaths Presents is already congratulating Heart WeHo and putting it on blast that the club is coming to 8911 Santa Monica Boulevard. 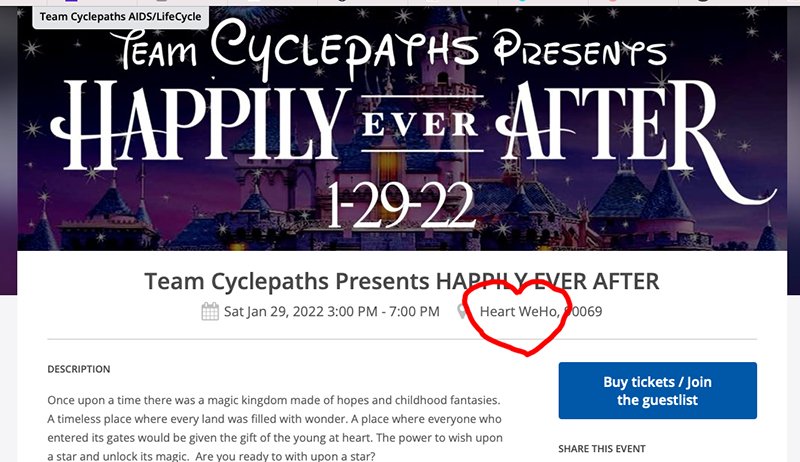 We will keep you posted on more details to come and hopefully see you on the dance floor soon.

Biggest? Yes, looking through a magnifying glass. It has less patron floorspace than Rage had, lots less than other clubs within a few steps. Though maybe the biggest amount of flashing lights.

“The biggest gay nightclub in the USA” – LOL. “Biggest” being defined with Lance’s Grindr glasses on.

Great question about the liquor license. It hasn’t been posted so far as I remember and it requires a 30-day posting. So, if they intend on opening on Feb. 14, 2022, then the posting must have been started Jan. 14. Also, the license must be associated to the address of the business and it doesn’t appear for that location in the license lookup database for the Alcohol & Beverage Control site: It is the applicant’s responsibility to: Post the Public Notice of Application at the premises for 30 days, and Give information to ABC as needed for the investigation In… Read more »

Filing this one under who cares! It literally looks the same. You people have too much time on your hands and besides communist Weho will just close it down so good luck with that.

Everything written here is true. The name is Heart. My friend applied to be a bartender there also. It will open this month for sure and I cannot wait. It looks the same as Rage so we are not missing much of our old gay space. It will be epic. Great article btw.

I commend you for your stellar investigative skills. Sign: ❤️

ABOUT US
WeHo Times West Hollywood Daily News, Nightlife and Events. The WeHo Times is an online news source covering the life and times of the City of West Hollywood. Featuring unbiased professional reporting and photo journalism, WEHO TIMES is updated daily, delivering the latest city news. The online publication founded in 2017, also features cultural events, people, politics, places, nightlife, and the history that make the City of West Hollywood the unique, creative city we all know and love.
Contact us: editor@wehotimes.com
FOLLOW US
© 2021 Murillo Media, LLC
wpDiscuz
7
0
Would love your thoughts, please comment.x
()
x
| Reply