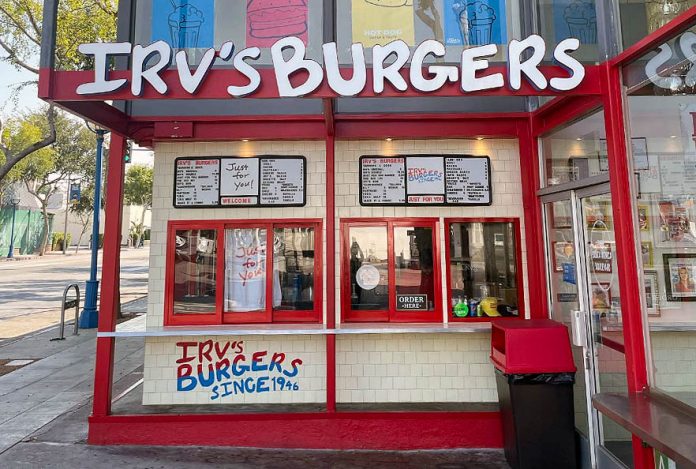 Irv’s Burgers West Hollywood, located at at 7998 Santa Monica Boulevard, is launching a new menu item and new extended hours this weekend. On Saturday, September 17, 2022, the iconic burger stand is giving away free turkey burgers to the first 50 guests starting at 11 a.m. Starting today, their Friday and Saturday hours have been extended to midnight from 11am to 12am.

The turkey burger the latest addition to their menu. It consists of a turkey burger patty, Irv’s sauce, green hatch chilies, tomatoes, lettuce, onions and cheddar cheese on a house-made bun ($9.50.).

The Chamber presented Irv’s Burger WeHo with a framed dollar bill for good luck and Mayor Meister gave them a proclamation.

The beloved burger joint first opened in 1946 and moved to West Hollywood in 1950 at Santa Monica Boulevard and Sweetzer Avenue, close the West Hollywood City Hall (The Conservatory West Hollywood took over the space and uses it as a coffee stand).

Los Angeles Eater reported last year that a new a benefactor stepped in to restore Sonia Hong to her rightful place in Los Angeles burger lore. The pop-up last year was put on by Lawrence Longo and his company Off the Menu — which just happens to be the group that is now backing Hong’s move into a new, permanent Irv’s Burgers stand in West Hollywood.

The new Irv’s Burgers West Hollywood sent a nod to the original location with a burger stand that resembles the stand on Santa Monica and Sweetzer Avenue. It has kept its menu simple, offering burgers, hotdogs and sandwiches with a side of fries, milkshakes, and/or cookies. It now adds a turkey burger to its menu options.

So happy to see that the turkey burger is back on the menu. Thank you!