Irene Soderberg to Finally Get Memorial Service at Hollywood Forever 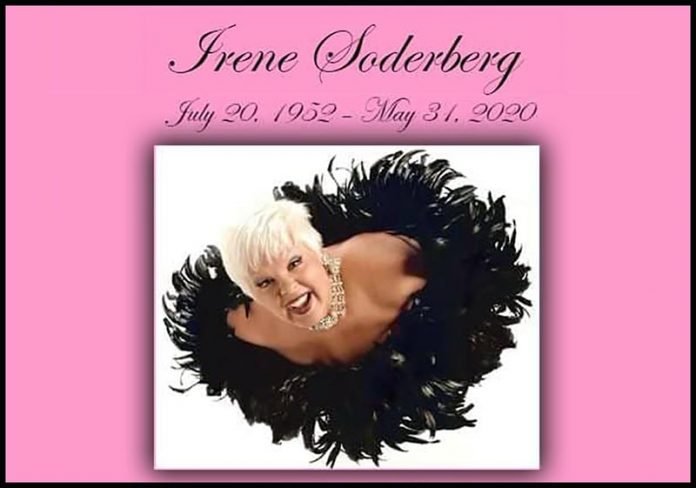 Activist and beloved entertainer, Irene Soderberg, will finally get the memorial service she deserves at Hollywood Forever Cemetery, 6000 Santa Monica Boulevard, April 21, 2022, at 11 a.m., two years after her death. There will be a scattering of her ashes at The Rose Garden and a service at The Chapel with a proclamation made by West Hollywood Mayor Lauren Meister. The Mayor will also declare April 21st as Irene Soderberg Day. 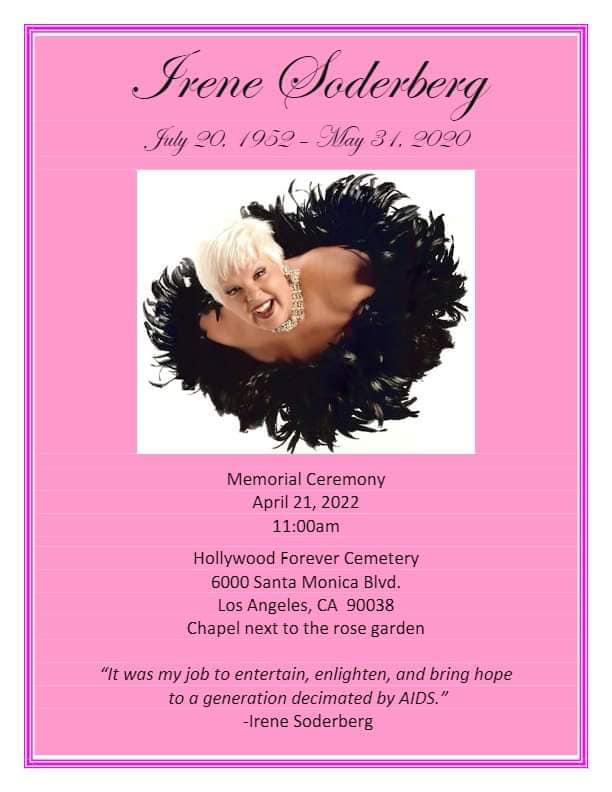 Mala Skelton along with Bobby Trendy, Glenn Treibitz, JC Gafford, and And Darin Sanone make up the tirelessly team that took on this labor of love project to help–both financially and physically–to make the service happen. The main financial support came from the Actor’s Fund facilitated by Lara Green. Beth Theriac, assistant to Mayor Lauren Meister, was also instrumental in the Proclamation.

“Way before I came around, Irene performed all over in the East Coast/West Coast for every single AIDS benefit you can imagine,” Bobby Trendy told WEHO TIMES. “A lot of people know her from all that. There are generations spanning decades that know her and will be at the memorial service to celebrate her life.”

Entertainer Irene Soderberg passed away on May 31, 2020. She had been entertaining for over 30 years. Wherever there was a piano in West Hollywood, she was there singing. She performed regularly at the Christina Applegate-owned Villa VillaKula back in the 90s (where Fiesta Cantina now sits) and she also entertained at the long gone Don’t Tell Mama piano bar in West Hollywood to name only a few of the WeHo venues she performed in.

She has been described as an HIV positive woman who used her voice at so many HIV and AIDS fundraisers around West Hollywood. HIV Plus magazine named her #19 in the 25 Most Amazing People Living with HIV in 2019 and credited her for raising millions for those living with HIV with her wildly entertaining and inventive stage shows. San Francisco declared April 21 “Irene Soderberg Day” in 2002 for her tireless work and contributions to HIV and AIDS causes over the years. Her husband infected her with HIV in 1990 while she was living in San Francisco. She came out as HIV positive to battle HIV stigma. She was 67 years-old.

Portland Oregon circa 1976. Family Zoo tavern. Irene would make an entrance. Everyone would scream IRENE to welcome her. That woman knew how to party.

lrene. was one of a kine she would come to the triple RRR. IN GUERNEVILLE CA. TO PUT ON A SHOW FOR THE TIME STAYING HERE. ME DANNY G. & LARRY T. WOULD HELP WITH HER CHANGEING COSTUMES AND ONE TIME WE CARRED HER WITH SOME OTHERS IN HER PINK Cadillac flowttie in to the swiming pool and evryone sat around the pool kicking up the water as she sang it’s raining MEN. THAT WAS SO FUN. WE LOVE YOU irene. R.I.P

What time is her memorial at Hollywood Forever? And I assume it’s on the 21st..right? Irene was such a kind soul who also performed many times in Palm Springs as well! Rest with the Angels..Angel! XO

Is the memorial date April 21st?

Thank you for updating the article to include time and date. Hope to attend. I loved her and her songs got me through some very rough times.