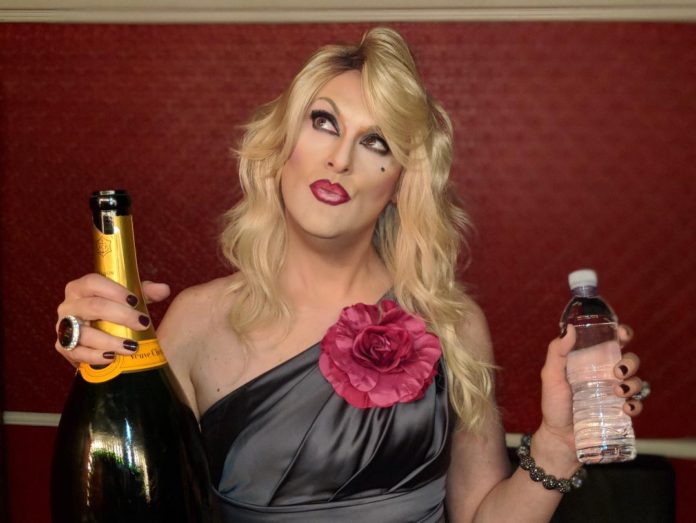 Welcome to 2018, queens! I know you are still nursing that hangover from all that cheap champagne you consumed during the countdown. And I know you vow to splurge for the good stuff like Veuve or Cristal next New Year’s Eve, but we are already halfway through January, and it is time to get serious! Down that Bloody Mary, swallow that aspirin, and let’s get to work. If we are going to make it “great again,” we need to focus on our goals, our dreams, and our New Year’s resolutions. Are you with me?

Personally, I rarely make resolutions because I’m an Aries. I can barely focus on one thing at a time. If something shiny rushes by, there goes my attention. Colorful objects pop up, there goes my attention. A hot guy in a g-string – you get it. An Aries is easily distracted. However, this year more than ever, I am reminded of the power within each of us to change the world. You don’t have to win a shiny Globe and give the speech to end all speeches – thanks, Lady O, by the way. To make a difference, all you need is you. So let’s do this together while we sip on what’s left of my stash of NYE champagne. Oh, and let’s start our resolutions out small. Four ought to be enough. Did those words just come out of this mouth? Four will NEVER be enough! In heel height or dic-tates for the New Year. But it’s a start.

Let’s begin with our first resolution! I love my job as your local drag hostess and entertainer. Although I have worked consistently every week for over 12 years, my resolution is to work more. Why? Because I have a fun job! I get to play with all of you, spread cheer and alcoholism wherever I go, and hold your hair back after I feed you too many mysterious shots. Who wouldn’t want to do that more? Plus, I get to wear pretty dresses and pretend to belt out songs that I could never sing for real at shows such as the Dreamgirls Revue every Tuesday night at Hamburger Mary’s – WeHo. Plug, plug! Ooo, this champagne has turned me into a marketing genius.

Let’s try it again. And, I get to sit on stage and run my mouth while calling numbers and giving you prizes … or spankings … while we play “Legendary Drag Queen Bingo” at Hamburger Mary’s – WeHo with our two games a night on Wednesdays and Sundays and one at 7pm on Thursdays. This bubbly makes me clever!

With “RuPaul’s Drag Race – All Stars 3” premiering on January 25 on VH1, I might master this resolution. After all, I get to watch the show and make sarcastic comments about it in front of a receptive, drunk, gay audience. Where do I host this RDR viewing party, a reader asks? Every Thursday at 8pm at Gold Coast Bar in WeHo. Oh, champagne, you’re good! And as a proud soap opera star of YouTube’s “Roads To Keystone,” we just aired 3 brand-spanking-new episodes of this Indie Series Award nominated comedy, containing so much campiness and half-naked manly hunkiness that you better buy a sump pump. Because your basement’s about to flood!

Are even more episodes on the horizon this year? I am told a big YES! Looks like I’m heading back to work in the studio, Mr. DeMille. Or is that Mr. Spelling? Mrs. Nixon? Mr. Bell? Mr. Valentini? Soap people will get these references.

Yes, more work slash play is a perfect place to start. But, I need a resolution that is selfless and makes a difference. I know! My second resolution is to speak to and inspire the young people of today. That happened once last year with some students at UCLA. They came to one of my events, and one student in particular named John Solan listened very closely. He is a third-year philosophy major, and something I said moved him. Was it my belief in the “Law of Attraction”? “Think of a vodka tonic, and you will attract one,” I proclaimed, corrupting tomorrow’s leaders. Nevertheless, philosopher John interviewed me and is featuring me in this month’s UCLA’s OutWrite News Magazine.

Not Your Typical Ingenue: An Interview With One of LA’s Premiere Drag Queens

What does he want the youth of today to know about Ingenue? In his words, he states, “Chug a mixed drink and say the world ‘fabulous’ three times in the mirror and Ingenue will appear before you, cocktail in hand.” See! The young folks of today know me. They know! I must continue to influence more of them at TigerHeat (every Thursday at Avalon Hollywood from 10pm-3am for the 18+ crowd) and beyond. It’s the bubbly again.

For my third resolution we are going big! I mean big! Alert the presses and journalist John from UCLA. This just in! I am going to run for “First Lady of the United States of America.” In this age of gender fluidity, true equal rights for women, and leaders who resemble misbehaved school children, we need a kickass First Lady. She needs to be at the ready to handle hostile drunks, opinionated hecklers, yet impressionable youth and still remain poised, glamorous, and confident in front of a critical community while wearing five-inch pumps and pounds of makeup. Well, who does that resemble? A drag queen!

Yes, us drag queens know how to work a room, get that cash for “our charity” (aka ourselves), and speak our minds to those in authority. It’s an election year, as they say, whatever that means. So, place your vote. Ingenue for First Lady. Woo! I’m fired up! This Ballatore champagne really packs a punch.

Speaking of punch, our final resolution finds us fighting our way back to sobriety. Remember, kids, when we woke up like in the morning and saw daylight? We would say, “Mommy, Daddy, it’s a brand-new day!” Now, we slam the clock on the floor because the alarm hurts our throbbing head. Instead we start the day with, “Man, why did I do those two shots at close? They always use the cheap stuff.” Then, we stumble around at the crack of three in the afternoon, deciding if “hair of the dog” would indeed help or would a big, greasy breakfast be better, even though it’s practically dinner time?

Fear no more! We are leaving those hangovers behind and quitting the sauce! Yep. From now on, we will drink $4 bottled water at the bar while we pretend to understand our friends who talk in “DrunkSpeak” as we go back and forth to the bathroom. That’s water for ya. No need to worry about “breaking the seal” anymore. Once we open that delicious plastic bottle, we will have one foot in the bar and the other near the gender-neutral toilets. Ahh, abstinence from alcohol is the best, right? The next morning, we have all the time in the world. Stacks and stacks of old laundry dry-rotted to the basket? Done! Late tax documents and insurance forms? Done! Cleaning the fridge, pruning the plants, and mending old costumes? Done, done, and done! See. We’re really having fun now, ladies.

And that’s what New Year’s resolutions are all about! Bringing more fun into our lives. It is time to make the world great again, and it begins at home. Heck, it begins with each of us individually living our best lives. The more positive energy we create, the more the world absorbs, and the more it comes back to us.

So, this year while I work/play more, engage with young folks, run for First Lady, and cut alcohol from my diet, I … I … I just can’t. Darlings, I just realized. I have a very demanding drinking schedule, and it makes me more positive. Therefore, that resolution is out. First Lady? Google tells me their spouse is elected, not them. And the rest? Are here on “Gilligan’s Island” – Ooops. The champagne snuck up again, and I liked it. I liked it! So, “the time has come” for my real resolution, and that is … drink up, bitches! Cocktails always bring more fun to my world. Raise your glass to whatever is in store for 2018. A lil liquor will get you through the bad and the good. Chug a lug, lug, lug… Now off to the mirror. “Fabulous,” “fabulous,” “fabulous”? And there I am! Happy Ingenue Year!