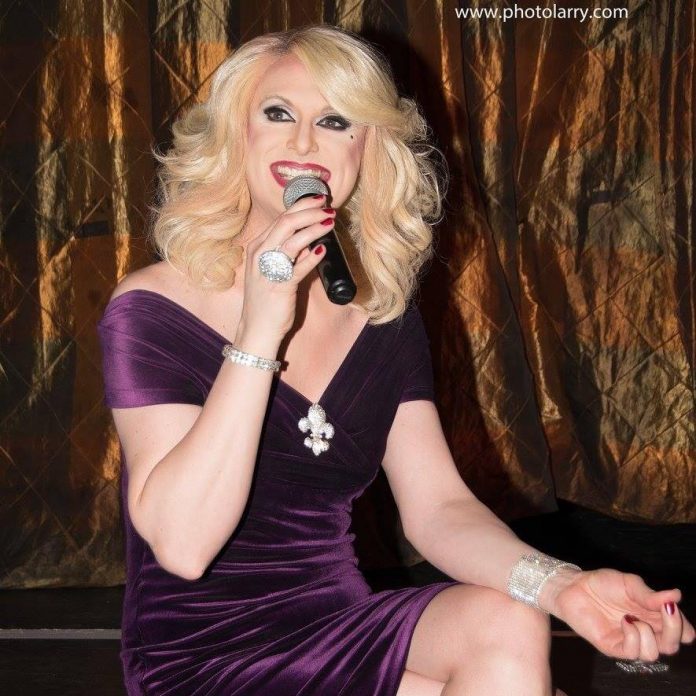 It was Sunday, May 29, 2005.  I had spent the early afternoon painting my nails with an old bottle of Wet ‘n Wild.  Couple that with the high temperatures, and, girls, that polish went on like molasses.  Next was the dress.  I choose a little black velvet number with Marabou feathers decorating the top.  Truth be told, it was one of only three dresses that I owned.  Did I have a choice?  But velvet in the Spring?  What did I know?  I squeezed myself in it, slid on some matching mules, and slapped on what few rhinestones I had.  Looking in the mirror, I remember feeling fat.  The dress was so snug compared to when I wore it out on a random night.  Hating a day job makes one only dream about lunch, and my waistline was showing it.  But I had more on my mind.  I was nervous.  I was terrified.  And, I had no idea how this evening would change my life.

Twelve years ago, I began my career on that very date as a nightclub hostess.  I walked slowly toward Fiesta Cantina with my heart racing.  Finally, my platform mule tiptoed over the threshold.  I was there, and there was no turning back.  Then, something miraculous happened.  My favorite song at that time played immediately.  “Murder On the Dance Floor” blared from the sound system connected to an iPod set to “random.”  Was this a sign?  Then, I heard a customer whisper, “Here she is.”  Without hesitation, my hand went in the air, and I started waving like I was some sort of star.  In that instant, I knew I was home.  Ingenue “The Star” had just made her entrance into West Hollywood nightlife and eventually out of her day job for good.  A new nightclub hostess had arrived.

The club was called Flirt (which would eventually move to Rage).  The promotion was produced by TigerHeat.  The boss was DJ Ray Rhodes, and it was my very first paid gig.  At the end of the night, Ray had cash in his mouth and stuffed it into my Marabou feathers with the most famous words he has ever uttered to me.  He said, “I wish you could be here every night.”  Twelve years later, darlings, I still am.

Twelve frickin’ years as a West Hollywood nightclub hostess.  So what is a drag nightclub hostess?  Well, I had no idea back then.  In fact, when Ray said I would “get on the mic” or “do a performance,” I choked.  What would I say?  What would I do?  I had no one to look to.  There were no weekly drag hostesses in West Hollywood.  True, Momma would make special appearances and open a new night or do a “one off,” but that was it.  The other drag queens did shows, but there were only two shows in town – one on Mondays at Micky’s hosted by Jackie Beat and the other at Rage on Tuesdays called The Dreamgirls Revue.  The latter did not have an actual hostess … not yet anyway.  Wink, wink!

Today, there is a huge drag presence in West Hollywood.  In fact, in my first article for WeHo Times, I listed the regular drag promotions for each week.  Literally, we have 7 days of drag!  We have 9 drag shows per week, 5 weekly “Legendary Drag Queen Bingos,” and numerous nightclub hostesses from Penthouse’s Blow to The Abbey to Micky’s to Flaming Saddles to Gold Coast and all the way to TigerHeat at Avalon, naturally.  Plug, plug!!  Hamburger Mary’s itself does 5 shows a week including The Dreamgirls Revue, where I still serve as hostess and emcee, a first-ever position created for me in 2008 by drag royalty Chad Michaels.  But this is just WeHo drag.  Let’s not forget our bejeweled sisters strutting their wares in Downtown LA, Long Beach, Orange County, the I.E., Palm Springs, and San Diego.  Keep that gas tank full, bitches, because this is one hell of a drag race!