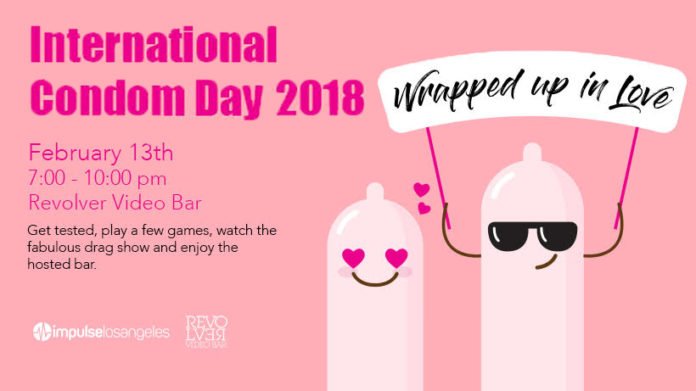 February 13 is International Condom Day. Get “Wrapped Up in Love” and celebrate the day dedicated to rubbers with Impulse LA (part of Impulse Group) at Revolver Video Bar in West Hollywood. Join Impulse LA for a night of games, a hosted bar and a fabulous drag show from 7pm-10pm.

International Condom Day seeks to promote the use of condoms as a means of preventing unwanted pregnancies and sexually transmitted infections (STIs). For those not in the know, condoms are thin rubber covers that a man wears on his penis during sexual intercourse as a contraceptive or as protection against STIs. Condoms are made from various materials such as latex, non-latex, lambskin and even female condoms. Condoms, latex and polyurethane versions, are the only method available to prevent transmission of STIs and HIV.

International Condom Day is promoted by the AIDS Healthcare Foundation in an effort to reduce the spread of HIV through safe sex practices. Since its inception in 2009, it has been an informal observance celebrated in conjunction with Valentine’s Day.

According to the CDC, 1 in 20 Americans will get infected with hepatitis B (HBV) some time during their lives. Hepatitis B is 100 times more infectious than HIV. According to the Center for Disease Control, there are more than 19.7 million new cases of Sexually Transmitted Infections in the U.S. each year. By twelfth grade, 65% of high school students will have engaged in sexual intercourse, and one in five sexually active teens will have had four or more sexual partners. The use of Condoms make for the only proven method for reducing the transmission of HIV and other sexually transmitted infections (STIs) during sex. 5 billion condoms are used worldwide every year.

Impulse Group is an international group dedicated to promoting healthier sexual lifestyles among gay men in 18 cities around the world. With support from the AIDS Healthcare Foundation, this group of volunteers works to create campaigns, events, and online content to reach a new generation of gay men who live in a modern and rapidly evolving world.

The “Wrapped in Love” event at Revolver Video Bar is one of many happening throughout Los Angeles for International Condom Day.

Revolver Video Bar is located at 8851 Santa Monica Blvd, West Hollywood. The event is FREE, but you need to RSVP!