Home Health If We’re not Counted, We don’t Count in Health Care 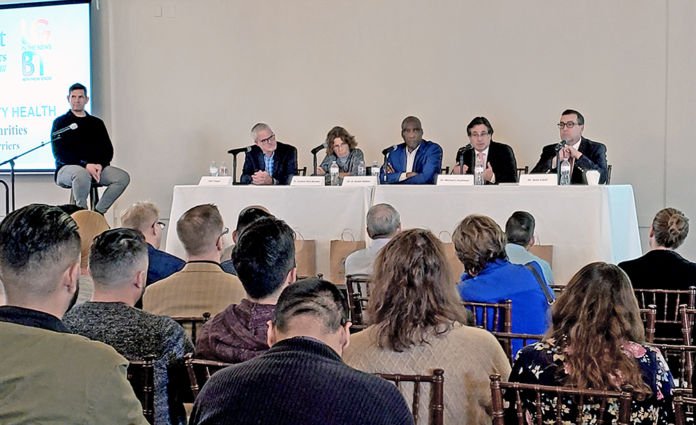 If there was a call to action that came out of the most recent engagement of LGBTs in the News with Thom Senzee, America’s longest-touring LGBTQ panel series, it was delivered by Dr. Sean Cahill, director of health care policy research at The Fenway Institute, based in Boston.

“If we’re not counted, we don’t count,” the influential LGBTQ health-policy think tank’s research leader said to an audience of about 120 members of the public, the media, clinicians, social-service workers and other policy professionals at the May 1st engagement of LGBTs in the News, held in Costa Mesa and presented by Radiant Health Centers (formerly AIDS Services Foundation). The panel focused on a range of LGBTQ community health issues under the banner, “Resolving Disparities, Overcoming Barriers.”

Cahill’s reference about the importance of being counted points to a detrimental and rampant national pattern emerging from inside the Trump Administration. By removing sexual orientation and gender identity from myriad government studies—possibly even from the 2020 U.S. Census—the federal government’s actions will have dire, perhaps even deadly results.

When the government counts and reports the number of deaths by suicide among teens in America, yet willfully stops collecting data about how many lost young people identified as gender non-binary, trans, lesbian, bisexual or queer, it makes it impossible to measure and understand these tragedies—and harder to prevent LGBTQ teen suicide. Cahill’s fellow panelist, Phil Yaeger, CEO of Radiant Health Centers, explained that collecting and sharing information is crucial to the delivery of prevention services and access to health care as well as other services for people living with HIV/AIDS and preventing new infections.

“Data is essential when applying for federal funding for our programs,” said Yaeger. “Private donors but particularly governments at all levels want to us to quantify the community needs we fill as well as show measurable outcomes. Cutting LGBTQ health data cuts off LGBTQ health funding.”

The need for education among health care providers outside and even within the LGBTQ community about pre-exposure prophylaxis or “PrEP” was also a subject of conversation among the panelists about which attendees wanted to hear more.

“PrEP is the medical breakthrough that can help us end HIV/AIDS once and for all,” said Yaeger. “However, some physicians are not familiar enough to prescribe it or are more concerned that PrEP will encourage unsafe sex than they are about preventing HIV. Unfortunately, a third reason PrEP may not be getting to those who need it is stigma and the patient’s own fear or discomfort speaking up to request it.”

Actually my “aha” moment came about a week-and-a-half before the panel—in a green room on Sunset Boulevard, as Yaeger and I awaited an interview with public radio legend, Cary Harrison about Radiant’s mission and the upcoming panel in Costa Mesa.

I asked Yaeger what he would say to critics who contend that AIDS services organizations are only evolving to serve the wider LGBTQ community in order to survive and that they’ve lost their way from the original mission to care for and serve people living with HIV/AIDS.

Yaeger’s reply couldn’t have been more of an eye-opener. “If we’re not here for them, who will be, Thom?” he said.

LGBTQ Seniors at Risk
Challenges faced by older LGBTQ people, especially those experiencing dementia or living with Alzheimer’s were topics of great interest during the panel discussion and audience Q&A.

Dr. Cordula Dick-Muehlke, founder of Cordula Cares and a national expert on bringing dignity, wellbeing and better health results to older LGBTQ patients, explained that some workers at residential health-care facilities and assisted-living centers suffer from dangerous and even bigoted misconceptions about sexually and gender-diverse seniors in their care.

Dick-Muehlke revealed that some nursing homes, especially some religiously affiliated ones, expect gayness, transgenderism and other “non-traditional” aspects of their patients’ genders and sexual natures to “revert back” to straightness or their birth-assigned genders—as if being gay or transgender were simply an affect, like a garment to be put on or taken off at will.

Cultural Competency in Health Care
In addition to being a PhD., Dr. R. Austin Nation, is also registered nurse and a public health nurse, as well as assistant professor at California State University, Fullerton School of Nursing. He led portions of the panel discussion focused on how stigma, fear and homophobia can keep LGBTQ patients and people living with HIV from accessing health care.

“The importance of finding LGBT-culturally competent health care providers and whether or not to disclose HIV status are all issues” whose importance cannot be overstated, Dr. Nation said.

“All of these issues are part of competency,” he said. “We have to be careful about language and making access to treatment feel safe. Even the word ‘survivor’ should by used with care.”

The fact that in 2018 as LGBTQ people and as patients navigating America’s labyrinthian health care system, we are still fighting just to be counted. In health care, simply being counted is again a front in our continuing battle to be accepted as real people who are present, and who are equal members of American society—like it or not.

Neither dictum could be more urgent in the age of Trump. Our community is under attack by this administration. From erasing LGBTQ people from crucial government statistical data, to attacking transgender service members—and now today, even as I write, the announcement that incarcerated transgender youth and adults will no longer be protected by their jailers from prison rape. Instead, in a stunning reversal from an Obama era policy, transgender women will be thrown into cell blocks with men.

I reported in 2013 that in regard to the safety of incarcerated LGBTQ minors “…a new vigor arrived in the juvenile corrections profession when, in 2012, the Justice Department issued national standards for ensuring that detention facilities conform to the 2003, “Prison Rape Elimination Act” (PREA) for the first time.”

Now that vigor is gone. One wonders, is there someone in the Executive Branch literally asking every day, “who is the most vulnerable person in America—and how can we hurt them?”