I went to New York City for the World Pride celebration and commemoration of the 50th Anniversary of the Stonewall Uprising this past weekend. A big highlight of my trip was meeting Stonewall veteran and SAGE (Advocacy & Services for LGBT Elders) member, Joe Negrelli, and hearing his story firsthand of what he witnessed at 53 Christopher St, New York, NY, 50 years ago. Mr. Negrelli was kind enough to let me share excerpts from his story with our WEHO TIMES readers, and for that, I’m eternally grateful. 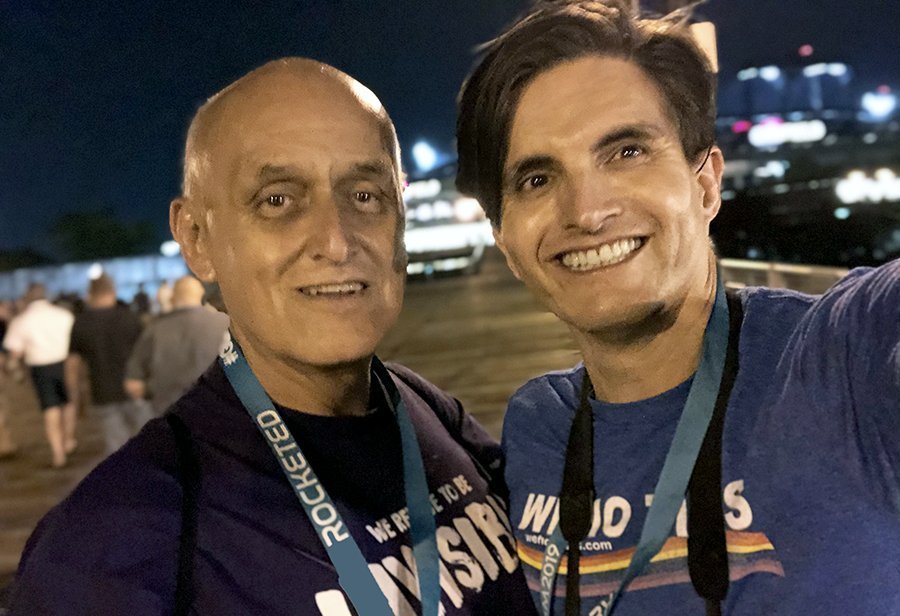 “I walked out of the Stonewall around 1:30 in the morning and hung out around Sheraton Square Park across the street from there… What happened was the police paddy wagons came–a politically incorrect word, but whatever…the police came and it’s a long drawn out story, but what happened was, all the white privileged men who had three articles of male attire on got to leave first. The women who had three articles of female attire were let out and then the rest were left in Stonewall as a courtesy to the City of New York. Sexual deviance was a charge at the time that they used against you and you had to have three articles of clothing of your assigned birth sex on you at all times.

What happened there was that they would bring people out and they’d take their photo. The press was there. They made sure that they published your beautiful face in front of Stonewall to show that you were a sexual deviant, that you would lose your job, that you would lose your business, even if you had a coffee shop, that you could be refused services and that in general they were taken out of society, the degenerates that drank at Stonewall. In case anyone is interested, Stonewall was not the classiest place to drink. In case you came to that conclusion.

What happened was, they brought one of the transvestites out. We were much better behaved on June 28, at 1 o’clock in the morning, than we were during the riots at 1:40-ish at Stonewall. For publicity, they pulled the transvestite’s wig off to show that he was not a she, she was a he. And for whatever reason, probably she was drunk as well–she just–they did not use handcuffs–she punched the policeman in his face. Immediately there after, about five policemen came with the old oak nightsticks and…pulverized would be a word to describe the blood that spewed. They pounced on this transvestite and they beat her up very badly and threw her into one of the paddy wagons. Shortly there after, one more person came out–someone from Sheraton Park–and just in case anyone is interested…there was a maximum of 200 people at Sheraton Park. What came out of that is someone threw a bottle from Sheraton Park and it smashed into the street.

The head of the police department that was performing the raid went in front of the park and he said, “Whoever threw that bottle, I want you to come forward and be arrested.”

It got a groan out of us, so he restated his position. And on the third time that he restated his position, one more bottle came out as well as a garbage can. In the old days all bottles were made of glass and all garbage cans were made of wire mesh. They got thrown into the middle of the street and you couldn’t even write a script this good. The paddy wagons hightailed it down the street. The police–about 15 of them, the press core and the transvestites in custody retreated immediately into Stonewall. They moved rapidly. They barricaded themselves initially inside Stonewall. Unbeknownst to them the inside and outside of the door, you could put a bar in between the two doors. Someone put a bar there and what happened was the policemen locked themselves in and the homosexuals had also locked them in. Someone broke the window as you all know and then again in the old days there were no disposable lighters. We had the old Zippo lighters which required lighter fluid and they started to try to light a fire.

By 2:15am, there was a full-scale riot. I’m not going to engage in controversy, except to say that they did act civilly disobedient. By 2:30, more than 1,000 people–non-homosexuals primarily; the anarchists, the anti-war movement, the civil rights movement and the women’s movement, came to the aid of the gay people. To my recollection it only lasted three days, but could’ve lasted five days, six days or whatever. Several days later, on the forth day, we had a meeting at the Church of the Holy Apostle, on 28th and 9th Avenue. The opening line was, we’re all sane and rational homosexuals and to cease and desist rioting. Well, I don’t know. I can only tell you that they chose not to cease and desist and 50 years later you see the results of that. I was amazed.

I constantly forget to make this point, but if your brother or sister, or child were at the Stonewall, there was a good chance you would also lose your job as well. There were retributions against families of gay people as well. They were risking a lot.”