Hundreds of Iranian-Americans and their supporters gathered at West Hollywood Park Thursday evening for a candlelight vigil honoring the life of Mahsa Amini, the 22-year-old Iranian woman who died in police custody in Iran after she was reportedly arrested for wearing her hijab incorrectly. The demonstration was led by Iranian American Women Foundation.

Demonstrators gathered before a a table displaying photos of Mahsa Amini’s life. They held signs, chanted the words “Woman, life, freedom,” and they called for human rights in Iran in the wake of Amini’s death.

Mayor Pro-Tem Sepi Shyne presented the Iranian American Women Foundation with a City of West Hollywood Proclamation at the start of the demonstration.

“I am a proud Iranian woman, a Muslim and a lesbian,” said Mayor Pro-Tem Shyne from the podium, noting how her family fled to the U.S. during the Iranian Revolution when she was five-years-old. “If we had not escaped Iran I would be killed for being a strong outspoken woman, for being a lesbian and for refusing to be anyone else but me.” 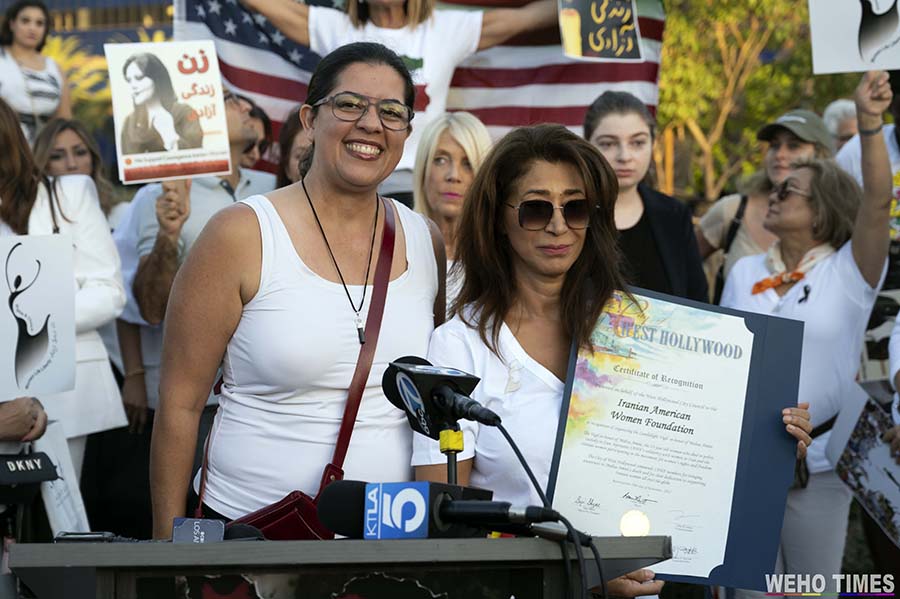 “We need to take our emotions and turn it into action,” said Mariam Khosravani, the Founder and President of the Iranian American Women Foundation. “We need to help our brave and courageous sisters in Iran. We want to let them know that they are not alone. It is heartbreaking to know that women on the other side of the world in our Motherland are living in such harsh conditions.”

The demonstration included live music and the demonstrators took to the streets chanting Mahsa Amini’s name and calling for freedom for Iran. The march began on San Vicente Boulevard, and it shut down one block on Melrose Avenue, Robertson Boulevard, and a section of Santa Monica Boulevard before heading back to West Hollywood Park.

The candlelight vigil for #MahsaAmini and demonstration in support of Iranian women at #WeHo Park began with music by this inspiring group. @WeHoCity @IAWFoundation pic.twitter.com/u4JdUgxO8X

Photos by Paulo Murillo for WEHO TIMES. Click on the images below to enlarge.

Mahsa Amini (Persian: مهسا امینی), also known as Jina Amini or Zhina Amini (Persian: ژینا امینی; Kurdish: ژینا ئەمینی), the 22-year-old Iranian woman who died in police custody, as well as the countless Iranian women risking their lives in the movement for women’s rights and freedom. West Hollywood Mayor Pro Tempore Sepi Shyne will be in attendance, along with Councilwoman Sharona Nazarian, and other community leaders.

The Guidance Patrol, the morality police of Iran’s Law Enforcement Command, arrested Amini for not wearing the hijab in accordance with government standards. Police said she had a heart attack at a station, fell on the floor, and died after two days in a coma. Eyewitnesses and women who were detained with Amini said she was severely beaten, which in addition to her leaked medical scans, led independent observers to diagnose cerebral hemorrhage and stroke.

Amini’s death has resulted in a series of large-scale protests across the country which garnered international attention, including a statement from the United Nations High Commissioner for Refugees, putting a focus on violence against women in the Islamic Republic of Iran. Several leaders, organizations, and celebrities around the world condemned the incident and expressed solidarity with the protesters. The United States Department of the Treasury imposed sanctions on the morality police and Iranian leaders in various security organizations.

At a regular West Hollywood city council meeting on Monday, September 19, 2022, Mayor Pro-Tem Shyne adjourned the meeting in memory of Amini. She has also taken to her social media platforms to to condemn her death and bring awareness to the women who are risking their lives and protesting while they are being shot at with birdshot and metal pellets, being tear gassed, and subjected to water cannons.