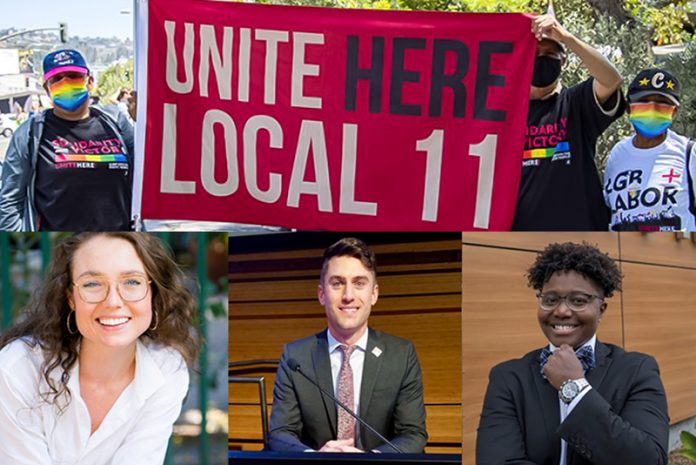 UNITE HERE Local 11 hospitality worker’s union have endorsed three West Hollywood city council hopefuls running for three city council seats in the upcoming General Municipal Election. Those three candidates include Chelsea Byers, Zekiah Wright and Robert Oliver. According to a statement, the three were selected for their progressive support of working people and renters in the City of West Hollywood.

City of West Hollywood Council members each serve for a term of four years and are elected at large. Each year, City Council members select one of their members to serve as Mayor for a year, with the term beginning after the City Council reorganization, which occurs once every year.

“Our city has made so much progress by raising the minimum wage, protecting housekeepers from assault, and defending affordable housing,” said Jorge Seperak, a 20-year WeHo resident and hotel worker. “Chelsea, Robert, and Zekiah represent these progressive values of West Hollywood.”

Unite Here 11 selected Byers for her work as a West Hollywood Human Services Commissioner who fought to build affordable housing, Oliver is a former restaurant worker and Public Safety Commissioner, and Wright is a Rent Stabilization Commissioner and an employee-side employment attorney who has dedicated their career to standing up for working people.

“This slate of candidates will work to ensure that the workers who make up the backbone of the city’s economy have a voice in the policy decisions that affect their livelihoods,” said Kurt Petersen, Co-President of UNITE HERE Local 11.

Last year, West Hollywood hotel workers pushed for legislation to raise the minimum wage for all workers, protect hotel housekeepers from sexual assault, and ensure they are fairly compensated for heavy workloads.

UNITE HERE Local 11 is the hospitality worker’s union and represents over 32,000 members working in the hotel, food service, and airport industries. Learn more at unitehere11.org

Im very pro-union but unite here 11 is so currupt. NOT going to vote for these three now!

Is this a joke? They shun the decent candidates and will now blanket our mailboxes with endorsements for these three jokers?

This group did they same for the disastrous Sepi Shyne and John Erickson. They sold their souls to Unite Here and dragged our beloved city to hell.

Of course they do. Exactly what we DON’T need…more of the same.

The union already has TOO MUCH POWER in our city. Hell NO.