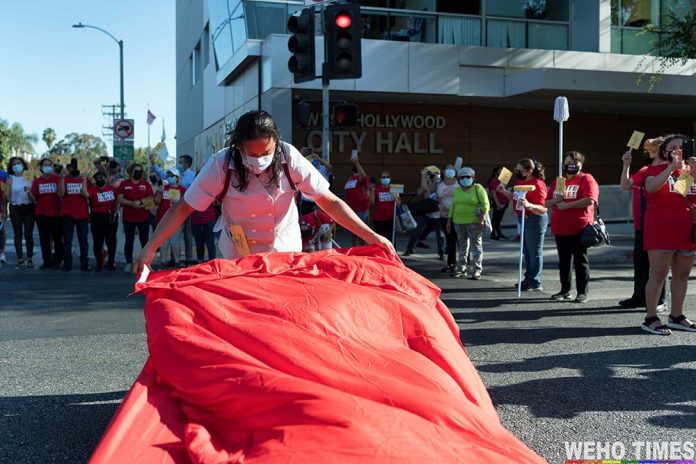 A large number of hotel workers, residents and allies gathered at Kings Road Park at around 5:30 p.m. They marched up Santa Monica Boulevard and gathered in front of the West Hollywood City Hall, on the corner of Sweetzer Avenue and Santa Monica Boulevard. The demonstration took place ahead of a regular city council meeting tonight where city council will vote on a hotel worker ordinance. 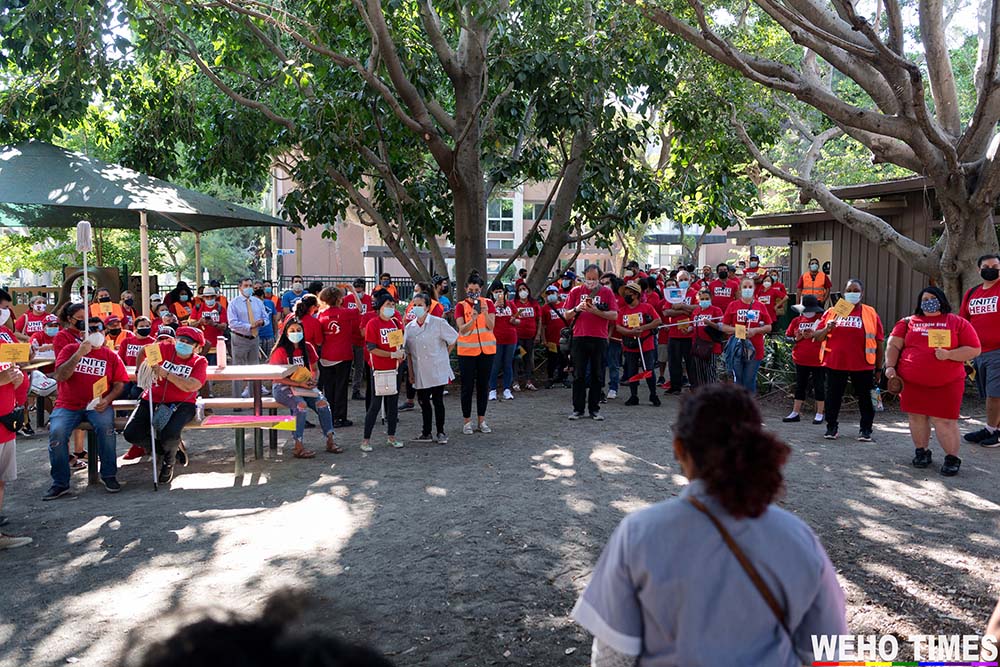 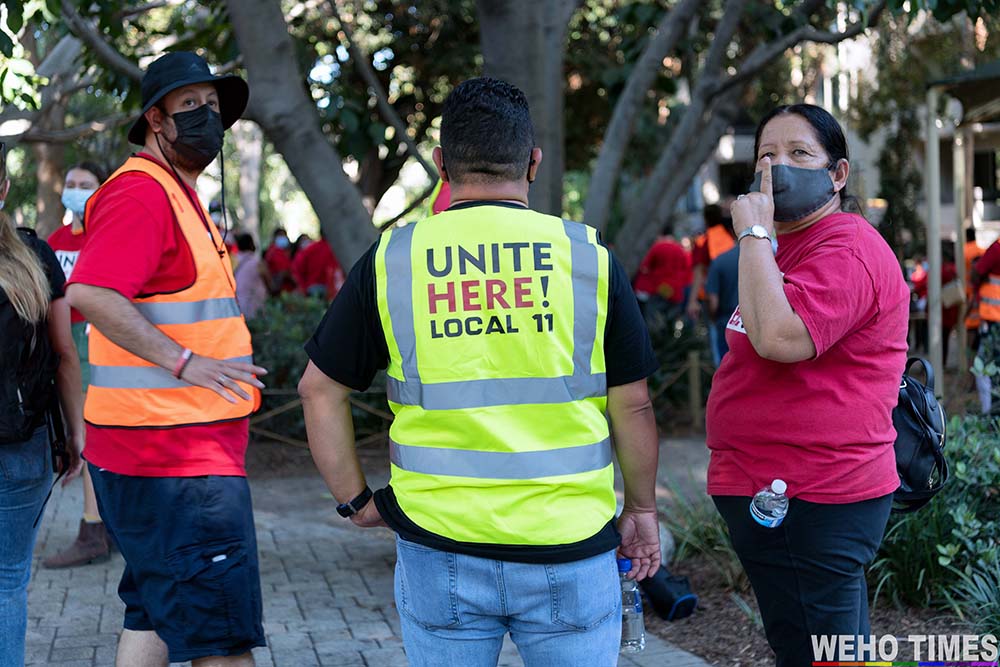 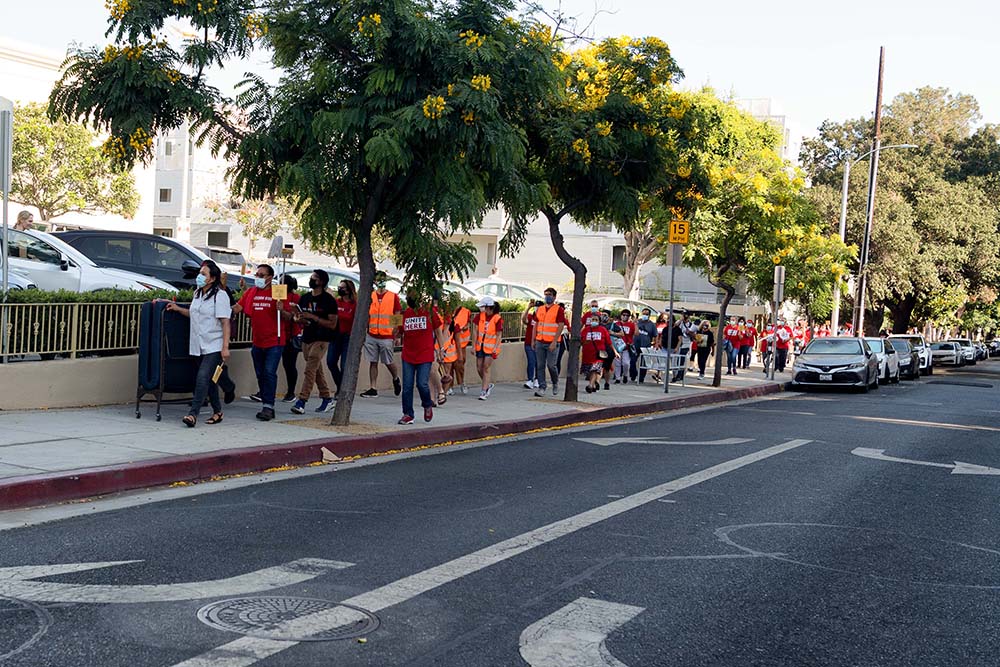 Workers wore red shirts. Some carried rollaway hotel beds, chanted and carried signs. West Hollywood Sheriffs Deputies escorted the marchers. Part of the demonstration was hotel housekeepers performing a special demonstration at the intersection of Santa Monica Blvd and Sweetzer where they made beds in front of City Hall to highlight another provision in the proposed ordinance.

According to a press release by UNITE HERE Local 11, a labor union of more than 32,000 hospitality workers in Southern California and Arizona, the policy is aimed at ensuring workers in the hotel industry, many of whom have dedicated decades of service to the industry, have jobs to return to their jobs as the economy reopens. The policy will also contain a series of measures to address the constellation of industry-wide problems that existed prior to the COVID-19 pandemic, such as instances of sexual assault and other threatening conduct, and the lack of comprehensive, standardized training. 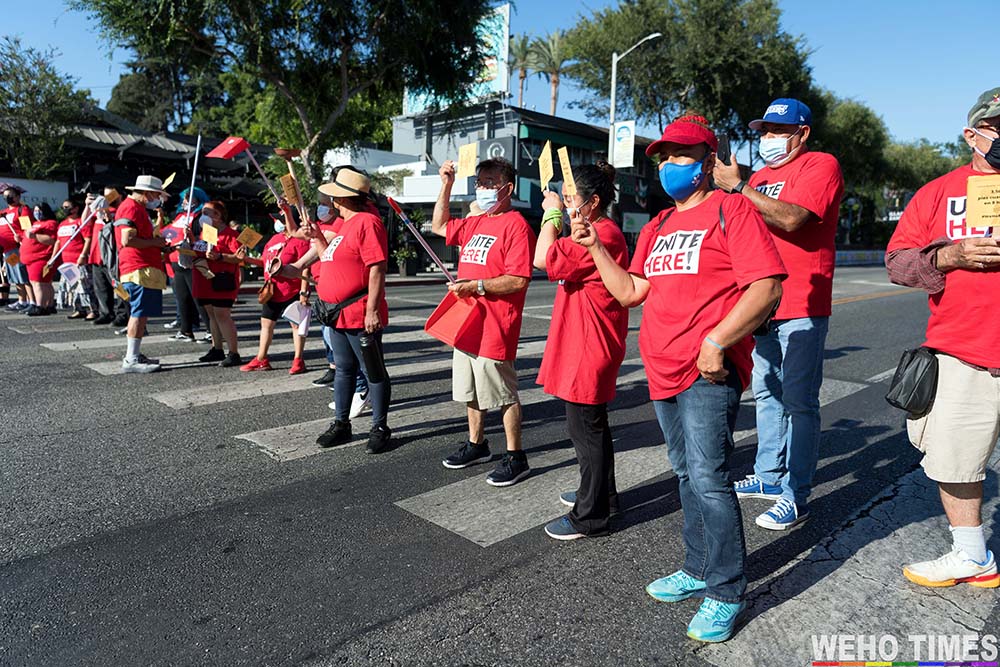 Housekeepers are calling on the West Hollywood City Council to adopt the same standard as Santa Monica in which housekeepers are fairly compensated when assigned heavy workloads exceeding 3,500 square feet in an 8-hour shift.

Over 550 West Hollywood residents have expressed their support for the policy and WeHo’s hotel workers ahead of the vote. Similar worker protection ordinances have been passed around the region, including in Long Beach, Oakland, and most recently in 2019 in Santa Monica.

The workers gathered on Sweetzer Avenue on the side of City Hall in front of the automatic car garage to watch the city hall meeting as it happened.

Genevieve Morrill, the President and CEO of the West Hollywood Chamber of Commerce released an open letter stating that the ordinance is politically motivated and is being touted under the guise of social justice for workers’ safety. “What it is really doing is creating untenable requirements that would force hotels into collective bargaining agreements by buying political support through campaign contributions. This ordinance will require a doubling of hotel housekeeping staff and impose severe restrictions on their compensation, which goes too far. This is BAD FOR BUSINESS and a JOB KILLER!

The discussion is on the hotel workers ordinance is ongoing as of the posting of this piece tonight. An update will be posted shortly.