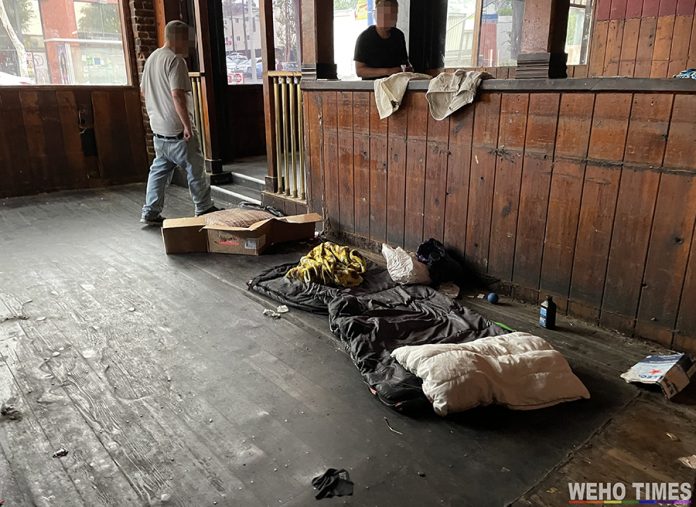 A recent photo shared on social media shows the current goings-on at the former Gold Coast Bar. The snapshot reveals what appears to be individuals experiencing homelessness and seeking refuge inside the empty building. They are seen squatting at the former bar that was vacated after it shuttered in late September 2020. Clothes look like they have been hung to dry. There are two sleeping bags and there is trash littering the floor.

“The new Gold Coast,” reads a post on Facebook. It is not yet clear where the photo originated, but the post went up on Wednesday, May 6, 2021 and it has been shared numerous times.

WEHO TIMES stopped by the former Gold Coast bar building yesterday morning, Friday, May 7th, to investigate. The windows at the building located at 8228 Santa Monica Boulevard have a mirror tint, however two individuals were seen inside. They are different from the two people pictured the previous day. One of the individuals was holding a spray bottle and appeared to be disinfecting the place. An attempt to interview the female individual with the cleaning bottle found us inside the former Gold Coast Bar after realizing the back door was open. There is a strong smell of urine inside the building. A look inside reveals garbage and the same sleeping quarters pictured earlier. 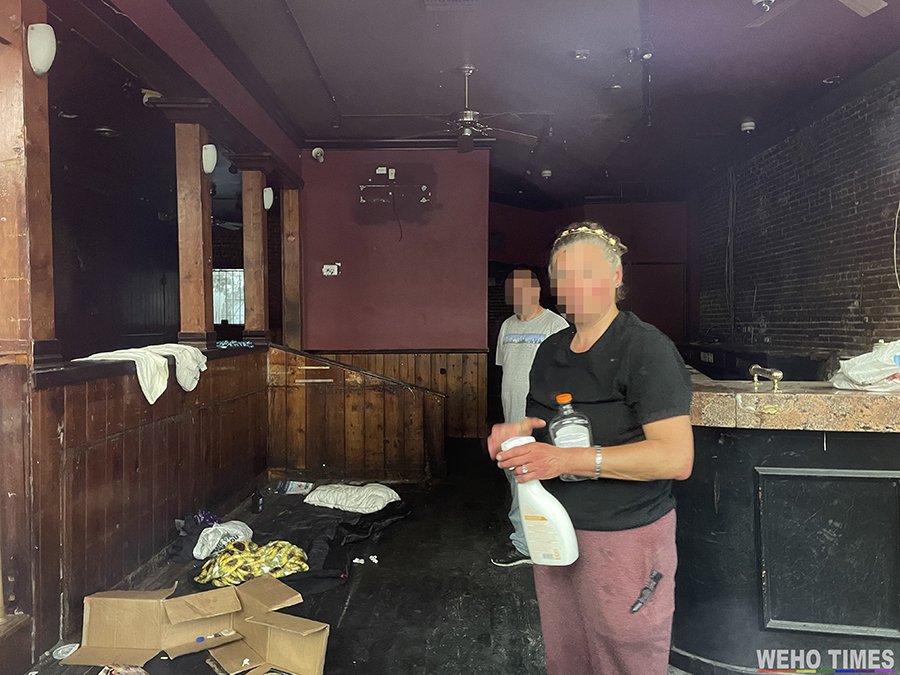 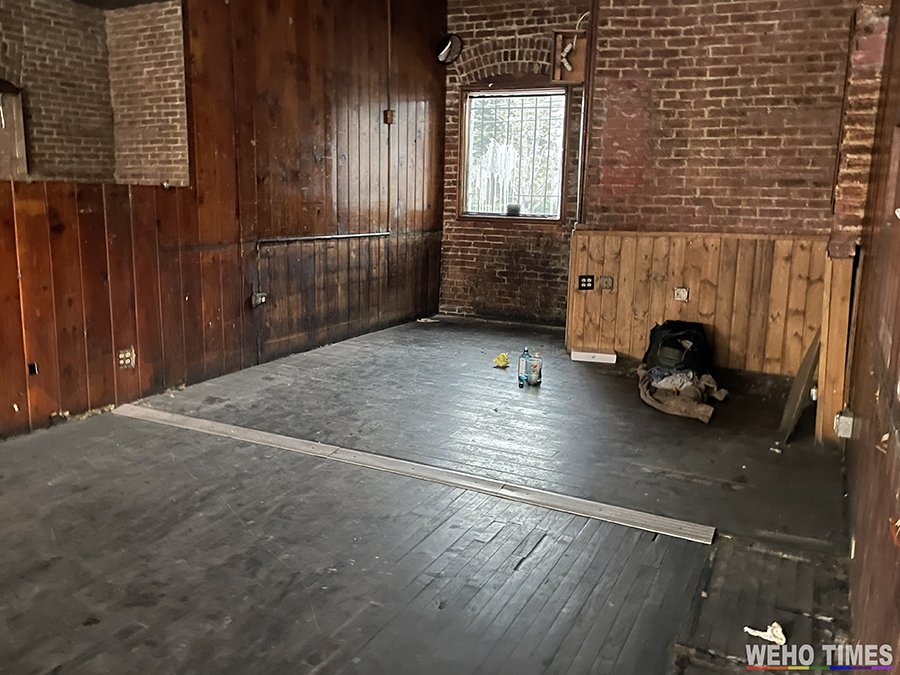 The woman holding the bottle became aggressive and started spouting 911 conspiracy theories saying we were part of the 911 attacks, so we vacated the building.

A call to Out of the Closet, the neighboring business, reveals that the staff is not aware that there are people living next door. A manager at that location said she has not heard any noise. Their donations drop off center is located right next to the bar. She expressed concern and stated that it could become a dangerous situation. She hoped they wouldn’t start a fire. She said this was a matter of public safety and asked us to call the WeHo Sheriff’s station.

A deputy at the WeHo Sheriff’s station revealed that no complaints have been made regarding soliciting, or trespassing of the building. He said the bar is currently listed as an empty building. He added that he would dispatch enforcement officers to take a look. 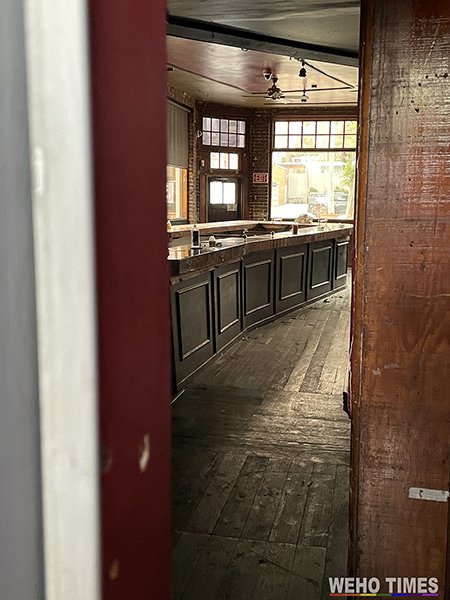 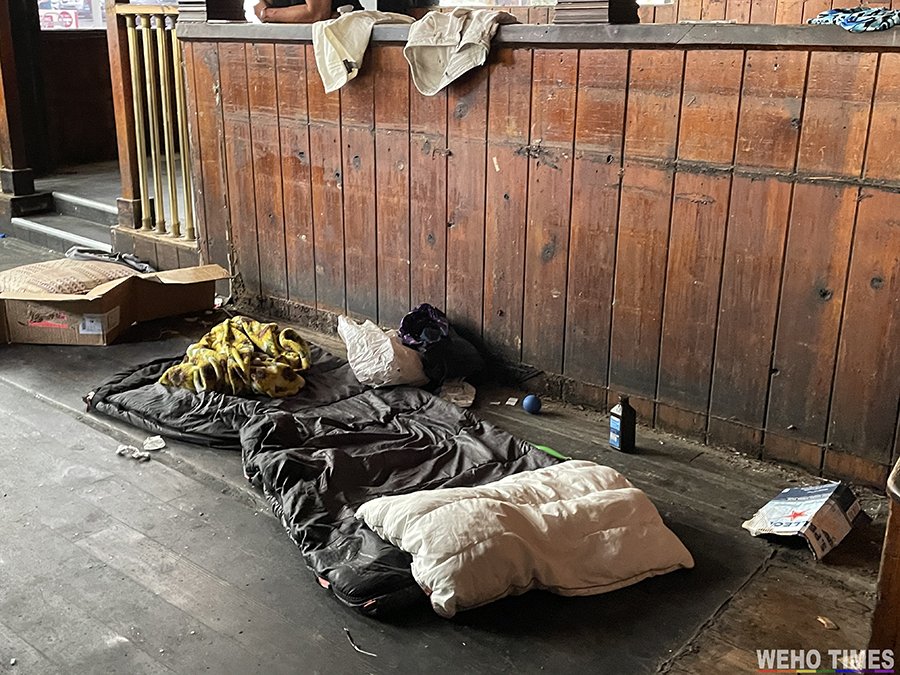 Calls to landlord Monte Overstreet, asking if he’s aware that people appear to be squatting inside his empty building have not been returned. It is not yet clear how/or if the building was breached. There are no signs of forced entry. It is not yet clear if there is a security system in the building. It is also not clear if a person responsible for checking in on the empty building.

The city of West Hollywood has a Homeless Initiative that seeks to address homelessness with a multi-disciplinary, multi-agency, collaborative response. The City partners closely with nonprofit service providers, the West Hollywood Sheriff’s Station, and Los Angeles County agencies. They provide a wide variety of services intended to reduce homelessness and support community members who are experiencing homelessness.

To learn more about what WeHo City is doing to address homelessness, visit: https://www.weho.org/services/social-services/homeless-services.

The fact that we have far more empty buildings and even housing units than homeless people (America’s internally displaced refugees) shows we clearly have the resources to easily solve the problem. Studies using computer modeling and other methods show that eviction bans and homeless shelters authorized during the COVID-19 pandemic drastically reduced infection rates❗

I posted those pics. I was so disturbed. Not for the homeless … but the blatant disregard Monty!!!! I don’t care how old he is he is DISGUSTING. NOW HE ‘S PARTNERS with Lance Bass. Must think a part of the Hollywood elite. What a jerk.

Paul, are you losing your sense of smell for a real story? This uninteresting portrayal of these people at boogeyman
caricatures of homeless squatters is tabloid level reporting, beneath your standard.

Who shut down small businesses for a year? Who implemented arbitrary health mandates making struggling businesses like Gold Coast become insolvent? Who left the property vacant for a multinational corporation to ultimately swoop in an profit off the misfortune? Not these people, they are just trying to survive. But better luck next time with your “journalism”.

I disagree with you. If you don’t care about the community then you shouldn’t be reading community newspapers. It’s not all entertainment to pique your interest. The homeless element of this story is sad. Equally sad is the current state of the Gold Coast. Landlord Monty Overstreet did not care to save the Gold Coast bar. He does not appear to care that vagrants are squatting in the place either. Paul did what any credible reporter would do. He went to the location and put himself at risk to confirm the story. He also took photos. This shines a glaring… Read more »

I am quite surprised to read here that: “ Homeless Initiative that seeks to address homelessness with a multi-disciplinary, multi-agency, collaborative response. The City partners closely with nonprofit service providers, the West Hollywood Sheriff’s Station, and Los Angeles County agencies. They provide a wide variety of services intended to reduce homelessness and support community members who are experiencing homelessness.” I live between Robertson/Santa Monica and Doheny/Robertson and my neighborhood is inundated multiple times a day by homeless (those deeply mentally ill to those down on their luck). This includes deification on our corners, lawns and bushes. It includes panhandling in… Read more »