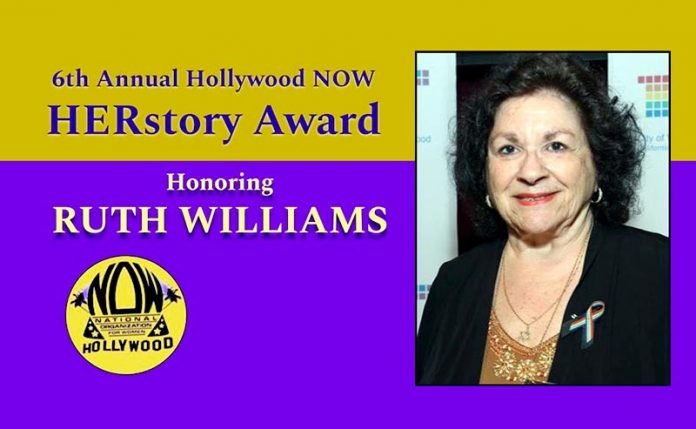 A virtual ZOOM meeting on Thursday, March 17 at 7:00 p.m. will be toasting (and roasting) Ruth Williams, the recipient of the 2022 HERstory Award. This is a free virtual meeting event, open to all in the community who support women’s rights and value the achievements of women in our community.

As one of the founders of the City of West Hollywood, Ruth Williams helped pave the way for rent control and pro-tenant housing protections in the city. She has served on a number of the City’s commissions over the last 38 years.

When Lindsey Horvath and Jerilyn Stapleton founded Hollywood NOW, Ruth became one of its first members and she continues to be an active member of the chapter.

As Director of Advocacy for the National Council of Jewish Women in Los Angeles, Ruth helped to forge a strong partnership between NCJW and Hollywood NOW, a collaboration that was successful in advancing women’s rights for women in LA County.

Ruth has done so much for women’s rights and the West Hollywood community. The 6th Annual HERstory awards ceremony will  take a moment to let her know how much the community appreciates her.

The Hollywood NOW is also a proud supporter of the City of West Hollywood’s annual celebration of National Women’s History Month. Throughout the month, a series of streetlamp banners that commemorate famous American women, civil rights leaders, and women’s rights activists will be on display along Santa Monica Boulevard.