I have written several articles and done my share of research on the old West Hollywood Sign that once stood on a slope on Santa Monica Boulevard from 1986 until around 1991. The sign was located at the parking lot between where Collar and Leash and the Ramada Inn now stand (Collar and Leash was once home to EZTV Video Center and the infamous Tropicana Motel, a low rent hangout for rock-n-roll types, once stood at the Ramada Inn location).

I wrote in my personal blog asking for any information on the history of the West Hollywood Sign back in May of 2013, and I’ve had several readers reach out to me to share their memories with pictures and stories of a sign, that was once a symbol of freedom and acceptance in the heart of West Hollywood, way before there were rainbow flags, a rainbow cross walk or a rainbow-colored Route 66 sign in the city of WeHo.

Anyone who lived, worked, played or passed through WeHo’s Boystown on Santa Monica Boulevard in the mid-80s to early 90s, would have come across the long gone and mostly forgotten West Hollywood sign that was meant to be a tongue-in-cheek sendup to the original Hollywood symbol. According to its creator, artist Michael J. Masucci, it represented pop, film culture, fame, and monumentality.

The large-scale sculptural graffiti art installation was part of EZTV Video Media where Masucci worked. It went up on April 15, 1986. It cost 50-dollars to buy plywood and white spray paint at a local hardware store. EZTV had an unveiling ceremony that also celebrated the 30th anniversary of the invention of video tape. Speeches were made at the event and there were performances which attracted onlookers, film crews, and the attendance of a Madonna-wannabe was a sign of the times. The City of West Hollywood was only two -years old at the time, making it the newest city in the country when the sign was erected.

“At the time we took it as a joke,” Masucci told me when I interviewed him back in 2013. “We thought, ‘Hollywood is the world capital of film, so West Hollywood is the world capital of video.’ When we put the sign up, we did it without permission. We never asked the landowner, so we expected it to be up for five days and we would be court ordered to tear it down. But we quickly saw that it meant a lot more than we first imagined. What started out sort of as a joke, ended up staying up for five years instead of five days. It really became a symbol for a lot of people, for a community and for a cause. It celebrated diversity and liberation.” 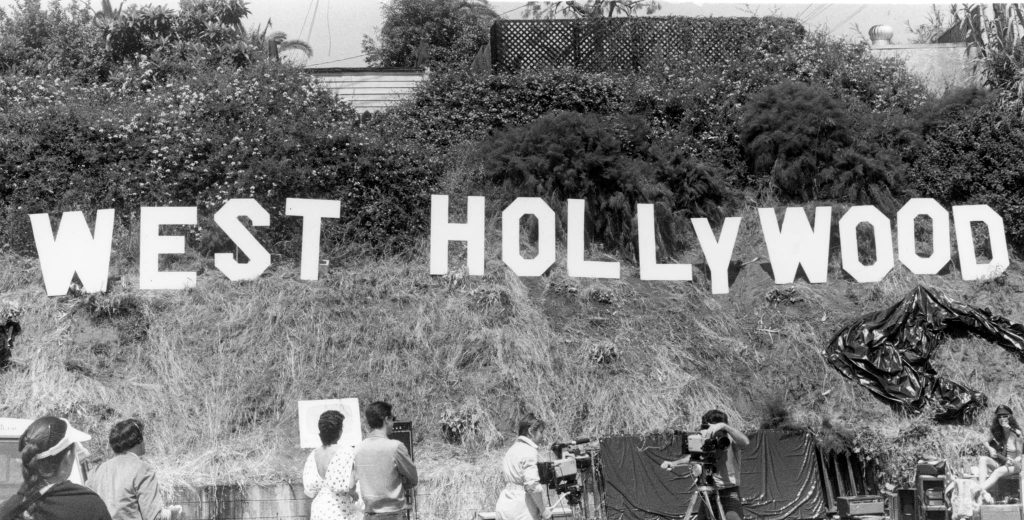 EZTV was founded in 1979 by video pioneer John Dorr and a team of independent writers, actors and technicians. Way before YouTube, EZTV was creating video art and producing critically acclaimed video projects with little to no budget. Today it continues to be a community-based artist run organization and a focal point of the independent video revolution. EZTV is among the first independent art spaces dedicated to video and to digital art. It pioneered the use of video projection as a tool for legitimate exhibitions. Numerous completed and exhibited projects are currently presented throughout the Online Museum at eztvmedia.com.

EZTV studio in WeHo had a large space that housed the first 100-seat video theater, as well as one of the earliest digital art galleries in history. According to Masucci the front part of the space was a public space that was used for lots of different things. ACT UP and Queer Nation would have meetings there and plan their activities. The front area was really part of the community.

According to EZTV Museum, the West Hollywood sign stood from 1986-1991. People kept stealing the letters, which Masucci would replace. At one point vandals left the words “Wet Ho” standing as a prank. The letters continued to be stolen. New letters were not made one day and the sign slowly disappeared. 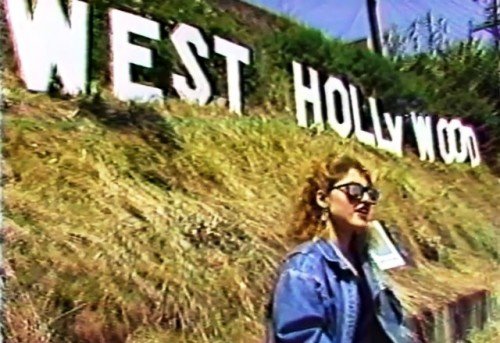 “We never thought the sign was going to be embraced by so many different people, but for the most part, it has disappeared from memory. It’s not even in people’s collection of West Hollywood history,“ Masucci told me. “It’s still interesting to see that it did have an impact beyond what even we were about.”

I remember the West Hollywood sign fondly from when I was a kid. I’m forever grateful to Richard Settle, Alan Light, Brian Smith, ONE Archives for sharing their historical WeHo images with me.