“In April 2021, demolition commenced on Lytton Savings, marking an end to this Modernist Hollywood landmark,” reads a current update on Los Angeles Conservancy website regarding the historical Chase Bank / Lytton Savings Bank, located at 8150 Sunset Boulevard. Although technically in the city of Los Angeles, the building known for its folded zigzag plate rooftop was embraced by many WeHo residents as a historical landmark.

In June 13, 2018, a decision by the Supreme Court of California to deny hearing a petition filed by the Los Angeles Conservancy effectively ended all legal efforts to stop the needless demolition.

In late 2020 a revised plan for the redevelopment of this site was unveiled, which still called to scrap the building.

The fight to save the building was not good enough. The building had its day with a wrecking crew last week. A tall fence with a thick tarp has been erected around the construction site to hide the destruction from public view. However, photos exclusive to WEHO TIMES show that the historical landmark was reduced to rubble within a matter of days. There is not much left but a pile of concrete and debris to make way for a new 57,300 square feet retail and restaurant space.

The Los Angeles Conservancy describes the now gone Lytton Savings Bank building as a striking departure from traditional bank design when it opened in 1960 with its dramatic, folded plate concrete roof and glass-walled banking floor.

“As financial institutions nationwide analyzed the need for progressive banking methods following World War II, architects responded by radically reinventing the bank’s form, reads a post on their website. “Lytton Savings (as part of larger Lytton Center) typified these national postwar banking trends through its modern architectural design, transparency, and integrated art component, and is one of Los Angeles’ earliest remaining examples of this transformative shift in postwar-era bank design.”

The Lytton Savings and larger Lytton Center occupied the former site of the Garden of Allah. The storied Hollywood inn with surrounding villas was purchased by Lytton in 1959. The Garden was razed to make way for the bank and now the bank has met the same fate. 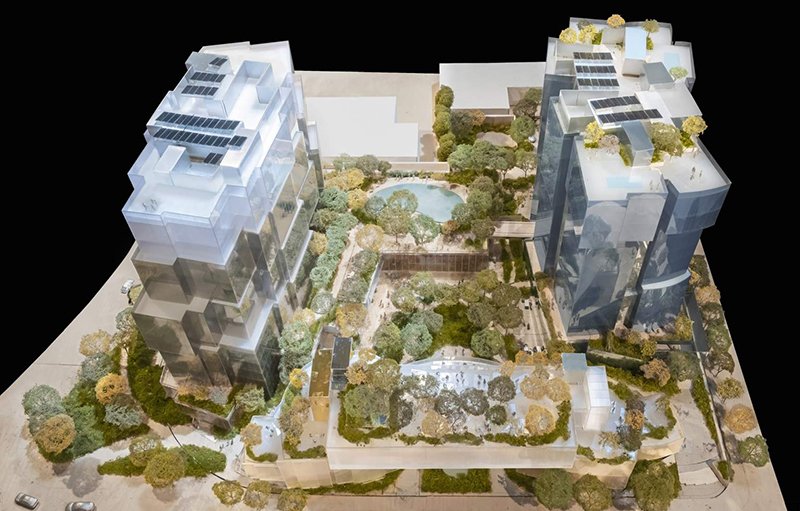 The new Townscape Partners project was designed by Frank Gehry, the architect who created the Walt Disney Concert Hall in downtown Los Angeles. The completion of the new construction is set for some time in 2023.

I despise Frank Gehry. He’s an arrogant no-talent derivative hack. His only gift is bamboozling people with money to build his dreck.

The “tarp” is part of a safety fence which was put up around the parameter of the building and parking lot for safety reasons, not to “hide the destruction from public view”.

Everything about this post is disturbing. The giant fortress is tellling that they know what they are doing is wrong, otherwise why hide? The dirt pile makes me really sad.