High School students Eitan Prins-Trachtenber, Nikka Makhani and Hannah Taheri are co-founders of The Ballot Project, a nonpartisan grassroots campaign that targets young people to get them to register to vote before the registration deadline on October 19, 2020.

West Hollywood resident Prins-Trachtenberg, who is a junior at Brentwood School, and his two friends formed The Ballot Project to raise awareness on issues surrounding voter turnout in America. They launched their campaign by distributing three different flyers around West Hollywood and Los Angeles, particularly in shops and small businesses.

“I believe that it is absolutely necessary to vote in this upcoming election,” The Ballot Project co-founder Taheri told WEHO TIMES. “Our goal is making registering to vote as easy and accessible as possible for voters who do not know how or where to register. We designed our fliers to be eye-catching and simple, so that people can see that all it takes to register to vote is scanning a code and filling out a quick form. Voting is the purest form of a democracy and it is vital that people vote because everybody’s voice deserves to be heard. Someone struggled for our right to vote, and their efforts are wasted if we don’t exercise it.”

“I believe In the importance of voting,” said co-founder Makhani. “More specifically, I believe in the significance of our democracy and how each citizen’s vote makes an impact in the country we believe in. I hope that the Ballot Project can inform citizens that their voices can be heard and help them recognize the privilege we have in this country to be able to elect our leaders.”

“I co-founded The Ballot Project after researching voting in the United States and discovering that we trail many developed nations in voter turnout,” Prins-Trachtenberg added. “This issue is important to me because I will be a voter in the next election, at which point I will be among the demographic that votes the least. I want to encourage people of all ages and especially young people to register to vote, because only around 40% of people aged 18-29 actually vote. By raising awareness and providing an easily accessible QR code which makes registering easy, people can register to vote and those under 18 can pre register, meaning they will automatically be registered once they turn 18. The more people that vote, the more voices get heard, and I believe that everyone deserves to have their voice heard every single election. My hope for the future is a voter turnout rate of over 75% in the United States in the next 8 years. I believe we can get it done as a nation, but it happens one voter at a time.” 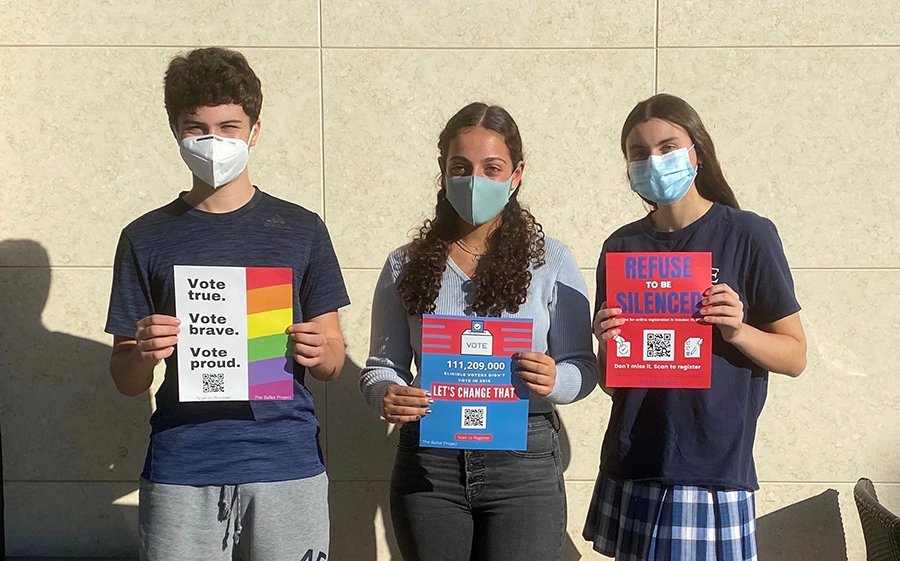 The three teenagers spent this past Sunday posting flyers posters up on Santa Monica at businesses like Salt and Straw and Kitchen 24, which they say were received incredibly from both customers and staff. The flyers have QR codes that link to a voter a registration site.

To learn more about The Ballot Project, visit: https://www.theballotproject.com/.

To register to vote before the October 19th deadline, visit: https://registertovote.ca.gov/.