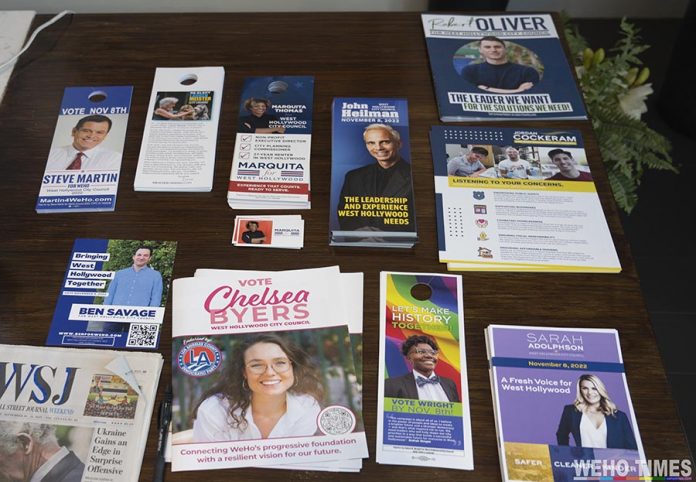 Election Day 2022 is upon us. West Hollywood city council hopefuls are hosting Election Day Watch Parties at local businesses in the Rainbow district. They are inviting supporters to join them as ballots are counted and numbers are tallied.

“I’m really excited going into Election Day,” Sarah Adolphson told WEHO TIMES. “I have learned so much during this campaign and have connected with many wonderful people in our community. We have a number of residents with great ideas for the future of our city and I feel that this election has encouraged many people to become more involved in the city; at least that is my hope. I will be watching the election results at Micky’s WeHo.”

Marquita Thomas will be sharing the Micky’s space with Adolphson. Both candidates will be surrounded by their team and supporters. Micky’s WeHo is located 8857 Santa Monica Blvd.

Incumbent Lauren Meister will be having her Election Day Party at The Abbey Food &. Bar where she recently hosted a Volunteer Breakfast. “It was so great to spend the morning with folks who care so much about West Hollywood,” she said of the event. “Together we’re going to turn things around for our City. We’re in the final push to get our message out this weekend! If you see us on your street, say hi! The Abbey Weho is located at 692 N Robertson Blvd.

We hear attorney, community leader, and dog parent Zekiah Wright will be hosting their Election Day Watch Party at Gym Bar where they have hosted several meet and greets and fundraisers. Gym Bar is located at 8919 Santa Monica Blvd.

“We’re gathering at Stache for an Election Night watch party,” said candidate Robert Oliver. “I’m inviting my team, volunteers, and members of the community to come celebrate our campaign efforts and watch the results come in.” Stache WeHo is located at 8941 Santa Monica Blvd.

Steve Martin decided to be a part of it all. He will be visiting all the candidates at their events to congratulate them and wish them well.

Cockram said he feels really good about Election Day. “We ran a great campaign, connected with a lot of residents and heard their stories, and a lot of votes of confidence.”

Chelsea Byers is taking her Election Night Party to The Sunset Strip at State Social House located at 8782 W Sunset Boulevard. “It’s been an incredible journey and we have so much to be proud of,” she posted on her instagram account. “Election results may not be clear on election night, but we will be gathering to celebrate our community and all we’ve accomplished this year. We’re working hard for every vote until the voting centers close at 8pm Tuesday night, then we’ll head over to one of our local favorites on Sunset for some fun.” Her supporters will enjoy food, fun, and community “as we celebrate our campaign and the next generation of leaders.” The event will run from 8pm to 10pm, Noveber 8th.

Candidate Ben Savage says he will be with family on Election Day. He plans to venture out during the evening.

“I will be home packing tomorrow night,” said John Duran of his plans for the big day. “I fly to Texas on Wednesday to visit my father and a wedding in Austin.”

Council member Lindsey Horvath will be celebrating her run for

It is not yet clear where Adam Darvish and John Heilman will spending Election Day 2022, but we will update this piece as soon as we learn more.

Here is a reminder that there are many ways to vote in the City of West Hollywood. Specific information about options for voting include:

(Ballot Drop Box located on the west side of the street, in front of the library)

Voting In-Person at a Vote Center

In West Hollywood, there will be three Vote Centers:

In California, you are eligible to register and vote if you are:

The City of West Hollywood encourages every eligible voter to have a vote plan with the following tips: