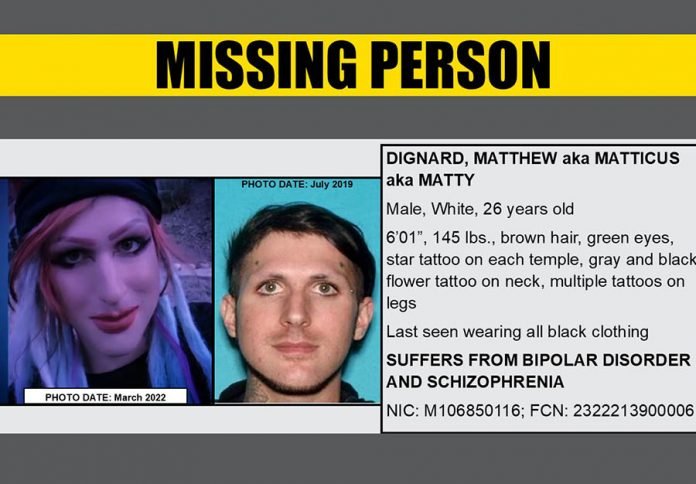 The Los Angeles Sheriff’s Department released a missing persons report today seeking the public’s help to locate a 26-year-old man with schizophrenia and bipolar disorder who was last seen in the city of West Hollywood. Matthew Dignard, also known by the nicknames “Matticus” and “Matty,” was last seen in March in the area of 8700 block of Santa Monica Boulevard.

Matthew Dignard is white, 6-feet-1 inch tall and weighs 145 pounds, with brown hair and green eyes. He also has tattoos of a star on each of his temples, a gray and black flower on his neck and multiple unspecified tattoos on his legs.

It is not yet clear why his photo is being released now since he’s been missing since March, but anyone with information on Dignard’s whereabouts is asked to contact the LASD Missing Persons Unit at 323-890-5500. Anonymous tips can be called into Crimestoppers at (800) 222-TIPS (8477), or by texting 274637 (C-R-I-M-E-S on most keypads) with a cell phone. If you see something, say something. Anyone with information on the shooting death can also drop a tip at https://www.lacrimestoppers.org.

Sadly, his family is looking for him for over a year. He needs to return to them and get stay on his meds. Weho drove him to addiction.

Very sad! Schizophrenia strikes young people about his age right in the prime of life. Some doctors think it is caused by an auto-immune disorder where the body attacks its own nervous system leaving the patient unable to tell voices inside their head from outside.