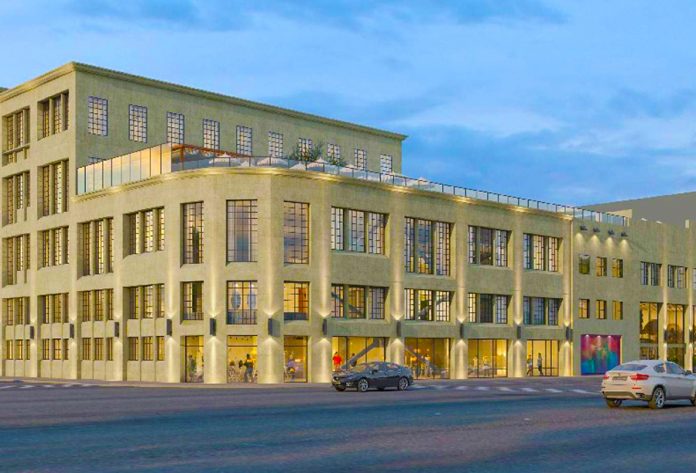 A new private luxury fitness club is launching just a stone throw away from the City of West Hollywood. Heimat fitness club is slated to open on the southeast corner of La Brea Avenue and Romaine Avenue later this year, literally across the street from WeHo. The new global flagship location by fitness leader RSG Group, promises to bring what it is calling an “exclusive yet inclusive” modern, sophisticated, and luxurious take on day-to-night fitness, offering a holistic, wellness, culinary, and cultural concept (RSG operates around 900 gyms on six continents, including its first nightclub-themed gym John Reed Fitness in downtown Los Angeles).

RSG Group is striving for a high-end experience with Heimat (German meaning homeland). The new fitness center is taking over the 1930s industrial factory building located next to CEMEX Hollywood Concrete Plant at 1000 N. La Brea Avenue. The new gym will include a rooftop pool and jacuzzi; an events space and outdoor bar; a restaurant (that will also be open to the public); a state-of-the-art spa; a co-working space; and ongoing cultural programming.

Details we found on the Alcohol Beverage Control (ABC) website states the license for 960 N La Brea Ave 4th and 5th Floor, will be for a restaurant and bar called The Barbell.

The Hollywood Reporter reports that unlike a private members’ club, Heimat will not be invitation only. Prospective gym members must apply to join and will be vetted by the club. Ed Bell, the managing director of Heimat, told The Hollywood Reporter that the club is “going to be a private community that we hope will be attractive to like-minded individuals and be inclusive across a diverse audience.”

High-end luxury does not come cheap. RSG Group introduced the John Reed Fitness to L.A. in March. The 33,000-square-foot fitness facility charges $130-a-month, according to a source who recently applied for a membership.

With several 24-Hour Fitness locations closing across Southern California due to a widely publicized bankruptcy, and gyms like Equinox charging close to $200 a month, Heimat health club has its work cut out for them in attracting that very specific “exclusive, but inclusive” clientele.

Is that near the 99 Cents Only Store? That area needs to be cleaned up.