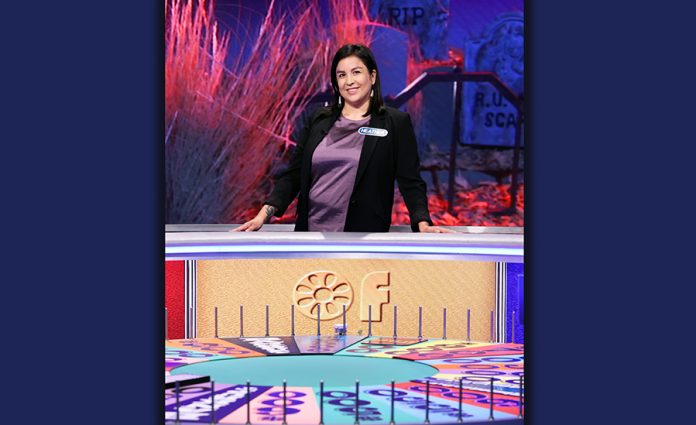 Heather Abbey is the latest resident of West Hollywood to become a contestant on  America’s favorite game show, Wheel of Fortune. Tune in tonight, Tuesday October 27, 2020, on KABC (ABC 7) at 7:30pm.

We previously reported that West Hollywood resident Jeremy Glenn, was a contestant on the show on Tuesday, August 4, 2020. He appeared during the “UK Getaway” week, presented in partnership with Collette. Jeremy won $20,498 in cash and prizes, including a trip to Switzerland, Austria, and Bavaria!

Heather Abbey is currently a student at Los Angeles Film School and lives with her fiancé and two children, Cairo and Kiowa. Heather is originally from Canada and moved to Los Angeles to create authentic Native American movies. She has been watching America’s Game her whole life and still watches everyday with her family. She applied to be a contestant at WheelofFortune.com, participated in a virtual audition, and is “truly excited” to be appearing on the show. Heather is hoping to win enough to help pay for her education and take her family on a trip to Paris.

Contestants guess hidden phrases by guessing letters one at a time for a chance to win money or prizes, as determined by a spin of the wheel for each correct consonant they guess, but they have to pay to see what vowels are in a puzzle. The contestant that has amassed the most winnings at the end of a game goes on to play the bonus round in which the player can win even more. Prizes frequently seen in the bonus round include automobiles, vacations and more cash.

Heather will be spinning the Wheel and solving puzzles to win once-in-a-lifetime vacations and cash prizes as part of “Halloween” week. For a behind the scenes look at how this special week of shows came together, viewers can watch the “Behind the Wheel” web series on Facebook, Instagram, and YouTube.

It’s easy to audition to become a contestant on America’s Game. Wheel of Fortune fans can submit applications at https://www.wheeloffortune.com/join/be-a-contestant for a chance to be invited to a virtual audition. Potential contestants can show off their puzzle-solving skills and potentially be selected to appear as a contestant on the show from the comfort of their own homes. If selected to be on the show, everyone goes home with a minimum of $1,000.

Repay the First Nations artists you took $$$ from Heather!!!!

Heather Abbey is such a Fraud! She fled Canada because she’s a shady business woman who ripped off her own community and sold her lies. She should be ashamed of herself. By the way where do I send my invoices?