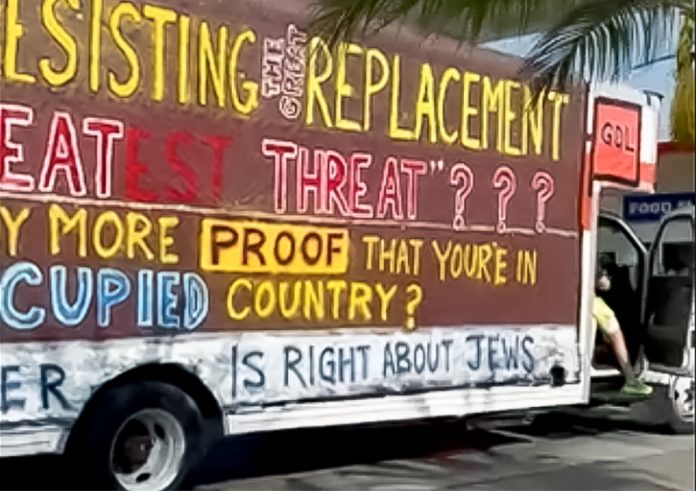 The City of West Hollywood released a statement addressing reports about a hate caravan with antisemitic messages that drove through the city on Santa Monica Boulevard this past weekend. Videos posted on social media show individuals shouting hate speech at members of the community with a bullhorn.

“The City of West Hollywood and the West Hollywood Station of the Los Angeles County Sheriff’s Department have received reports this weekend about multiple vehicles seen in the area displaying messages of antisemitism, and about incidents of hate speech in the community.

These reports are particularly distressing as we mark Harvey Milk Day. We celebrate Milk, who was Jewish and who was the first openly gay man to be elected to public office in California, and we will never forget the path he helped to build in rejecting discrimination and in embracing full civil rights. In honoring his life and in remembering how his life was cut short by hate-fueled violence, we must commit to standing together in rejecting hate.

Hate has no place in the City of West Hollywood.

The City of West Hollywood has a core value of respect and support for all people and there is no tolerance for hate, intolerance, or discrimination.”

Authorities are investigating the hate caravan. The main truck displaying antisemitic messages is being characterizing as a hate incident. Investigators have identified the license plate for the truck and are working to identify who rented it. The truck belongs to U-Haul.

Comedian Kathy Griffin called out U-Haul and named the alleged driver by name via her Twitter account.

The City of West Hollywood released a similar statement this month last year addressing an incident as Sushi Fumi restaurant, located in the 300 block of North La Cienega Boulevard outside the West Hollywood city limits. A fight broke out in front of the restaurant May 18, 2021, in what police called a possible hate crime after diners were attacked by pro-Palestinian demonstrators and singled out jewish people.

The City of West Hollywood will celebrate Harvey Milk Day 2022 with a virtual staged reading of the play Dear Harvey: Stories of Harvey Milk, by Patricia Loughrey. The event kicks-off WeHo Pride with the launch of this year’s LGBTQ Arts Festival.