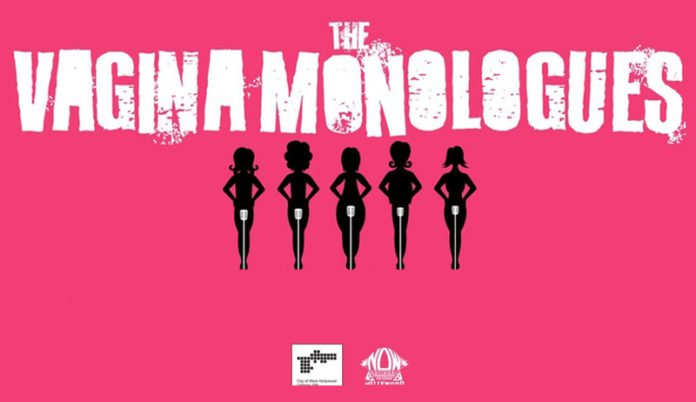 The Hollywood Chapter of the National Organization for Women (NOW) and the City of West Hollywood present a production of The Vagina Monologues on the weekend of February 17 & 18, at 2pm, at the West Hollywood City Council Chambers, 625 North San Vicente Blvd. The show commemorates the 20th Anniversary of V-Day.

V-Day is a global activist movement to end violence against women and girls (Women and girls is an inclusive term reflecting all those who were assigned and/or identify as female). V-Day promotes creative events to increase awareness, raise money, and revitalize the spirit of existing anti-violence organizations. V-Day generates broader attention for the fight to stop violence against women and girls, including rape, battery, incest, female genital mutilation (FGM), and sex slavery. The ‘V’ in VDay stands for Victory, Valentine and Vagina.

Through V-Day campaigns, local volunteers and college students produce annual benefit performances of The Vagina Monologues and A Memory, A Monologue, A Rant and A Prayer to raise awareness and funds for anti-violence groups within their own communities.

V-Day, a non-profit 501c3 corporation, distributes funds to grassroots, national and international organizations and programs that work to stop violence against women and girls. V-Day has received numerous acknowledgements and awards and is, one of the Top-Rated organizations on both Charity Navigator and Guidestar. In 2001, V-Day was named one of Worth Magazine’s “100 Best Charities,” in 2006 one of Marie Claire Magazine’s Top Ten Charities, and in 2010 was named as one of the Top-Rated organizations on GreatNonprofits. In eighteen years, the V-Day movement has raised over $100 million.

Tickets are $15.00. All proceeds to benefit Planned Parenthood Los Angeles. Parking is free with validation.