The hamburger joint known for its affordable and traditional burgers, hot dogs and sandwiches, surrendered its prime real estate location at 8954 Santa Monica Blvd, on the busy corner of Robertson Boulevard and Santa Monica Boulevard.

“After 40 great years, due to lease expiration, we are forced to say goodbye!!!” reads a banner on the side of the fast food restaurant. “Thank you WEST HOLLYWOOD for many years of patronage.”

The closing of this long-running fast food eatery may come as a shock to those who are used to seeing it standing in defiant contrast to Lisa Vanderpump’s upscale PUMP Restaurant Lounge, across the street. A sign on the building boasts, “Almost everyday people tell us, ‘you have the best burgers in town,'” however, they were forced to cut their hours of operation on Mondays and Tuesdays because the restaurant stood empty during the evenings. It usually opens 7am-12am, Monday through Friday.

A source tells WEHO TIMES that their rent was up for renewal and it was doubled during a time when the restaurant was hurting for business.

The burger stand is slated for demolition to make way for developer Faring’s Robertson Lane project, which will turn The Factory dance club into a nine-story hotel with 241 rooms and a rooftop pool. The developer is also planning ground-level retail and event space, along with restaurants and six levels of underground parking for 750 vehicles for the 1.94-acre space at 9091 Santa Monica Boulevard.

Hamburger Haven will be turned into an upscale restaurant in the shape of a birdcage. 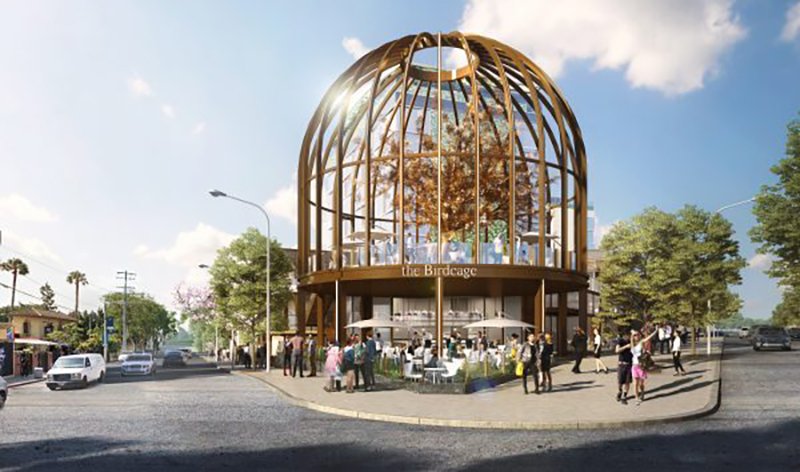 An employee at Hamburger Haven says he’s unsure how late they will open today. It will all depend on how busy they get during the lunch hour. They may close after lunch, or stay open until early evening, but this is it. It’s the last day.

When asked what will happen to the employees that work there and he said he did not know. “It’s a bad time to close during Christmas,” he said.

Hamburger Haven is open for lunch. The community is encouraged to stop by to say goodbye.

The closing of Hamburger Haven means Brazilian Bossa Nova Cuisine, located next door, is next.

That birdcage is fugly.

I was working for 26 yrs in hamburger haven. I miss that place.my name is Jose.

Ive been going there since I was about 10 years old or younger with my dad when we worked in the hollywood hills cutting grass, cleaning pools and tending to the responsibilities in the hollywood hills homes. I will truly miss this place and the people who worked there like Rudy. It will always have a place in my heart and my memories. I am 36 now and still go there for lunch. I love Hamburger Haven not only because they have the best burgers but also because they got me closer to my dad. Thank you from the bottom… Read more »

I feel badly for the employees but not the owners. They did not upgrade anything in FORTY years especially the sign. Look how faded it is and how many bulbs are gone. They obviously didn’t care.

How judgmental. You don’t know that they didn’t care; perhaps the owners didn’t have the funds, or perhaps wanted to create some nostalgia by leaving things as is. Did you go there for the delicious food or to see how updated it was. You don’t know the story, so don’t make one up

Why Must EVERYTHING be HIGH END these days can’t we have a few little places of our past left!!!??? I like High END too but not ALL the time. And what will happen to all the HIGH END shops Hotels and restraints and bars when people get to the point they cannot afford them and they close and then what will your neighborhood look like??? Or in 30 years that is no longer the hot spot area? I guess it’s all about making the Benjamin’s now and then move on and what’s left in the aftermath. This will all be… Read more »

And I was the original bartender right behind the Hamburger Habit/Haven when we opened the Backlot of Studio One! Those were the days!