Halloween Carnaval 2020 Was Cancelled, but Some People Still Came Out to WeHo in Costumes

The Halloween Carnaval 2020 was cancelled this year in accordance with the Health Officer Order from the Los Angeles County Department of Public Health, which prohibits public gatherings of more than 10 people as the region responds to the coronavirus (COVID-19) pandemic. However, that didn’t stop some folks from dressing up in costumes and hitting up Santa Monica Boulevard on Halloween night.

People walked up and down Santa Monica Boulevard with not much to do or places to go to as bars remain closed during the coronavirus pandemic and restaurants were filled to their limited capacity the entire night. The lines to have “dinner” at the restaurant and bars were long in the heart of WeHo’s Boystown/LGBT Rainbow District, but that didn’t deter people from trying to have fun and make the best out of a sad Halloween that was a complete bust in 2020.

Halloween Carnaval is only one of many events that cancelled this year in West Hollywood. There with this past LA Pride parade and festival, which turned into a All Trans Lives Matter Protest and the upcoming New Years Eve celebrations, which are also cancelled this year. People are encouraged to ring in the New Year at home, or in small gatherings of 10 people or less.

Folks didn’t always keep a six-feet distance while waiting in line at Rocco’s. The out zone situation at Fiesta Cantina, which takes up a lot of space on that section, made the sidewalk cramped with people trying to get by. However, The Abbey Food and Bar had security walking up and down the long line and aiming their flashlights at people’s feet to make sure they kept a safe distance. 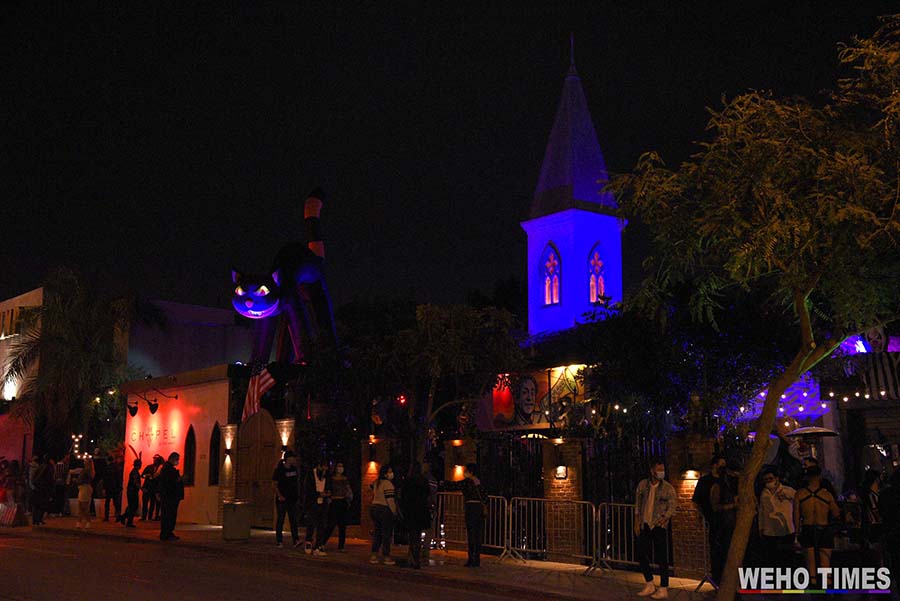 There was also the issue of wearing a protective mask on Halloween night. The City has had a mandatory face-covering requirement, which went into effect in late May 2020. For the most part, people complied, sometimes removing their face covering to take a photo, but there were those who committed to their look and put their costume before the safety of others during a pandemic.

Below are some photos from last night.