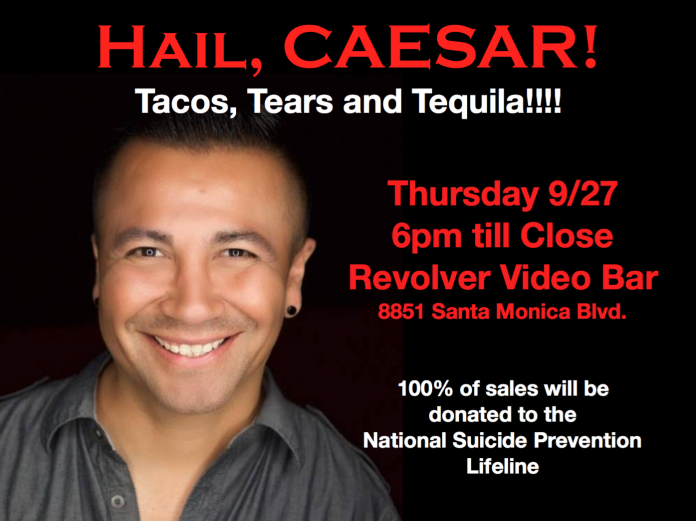 Revolver Video Bar is celebrating the life of Caesar Torres with “tacos, tears and tequila” on Thursday, September 27, from 6pm till closing at 2am.

Although the cause of his death has not been confirmed, and details surrounding it have not been released, the bar where Torres worked as a manager, is donating 100% of its proceeds that evening towards the National Suicide Prevention Lifeline.

Torres was found dead in his apartment on San Vicente Boulevard, some time in the early morning hours of Saturday, September 22.

“The Rainbow Flags in historic Boystown WEEP at half mast today. Because we lost Caesar Torres.” Duran posted on his Facebook Timeline. “Friend to so many of us. The HERE Lounge. The Revolver. The nightlife in Weho. Companion. Laughter. Good times. Don’t ever think that we are not all Interconnected [sic] in this time and space in West Hollywood. Some of us don’t have biological families anymore . So we created family. Caesar – you did that. You created a family. And we are broken hearted at losing you and wondering why? RIP. We grieve for you deeply. We care for one another now. And the City weeps.”

Find them online at: https://revolverweho.com/